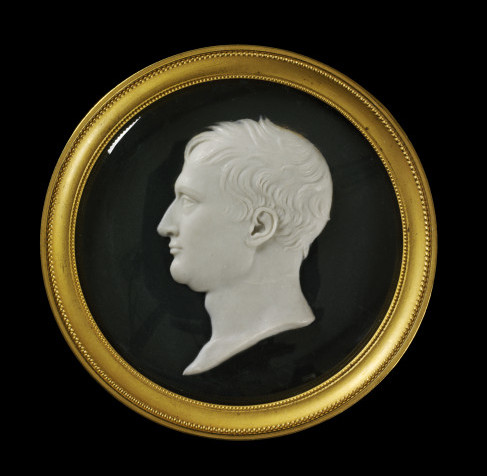 This day in 1769 saw the birth of Napoleon Bonaparte.

Born in Corsica to a family with Italian noble ancestry, Napoleon went on to make his name one of the most famous in European history. In France he took power in a coup d’état of 1799, installing himself as First Consul and later had himself crowned emperor in 1804.

Like Louis XIV, Napoleon made the decorative and fine arts central to his new image of emperor. Patronage from the imperial court revived French manufacturing, and the production of luxury goods became an expression of French supremacy.

Napoleon tried to create a link between contemporary France and the great civilisations of the past. The ‘Empire style’ he promoted adapted the symbols and ornament of Imperial Rome and was characterised by simple, bold designs, luxurious materials and rich colours.

In 1798 Napoleon launched a military expedition to Egypt, aiming to seize Egypt from the Ottoman Empire. Although not a military success, the expedition was promoted in France as a national triumph. Napoleon’s Egyptian campaign triggered a widespread European fashion for all things Egyptian.

Napoleon was emperor from 1804 to 1815. During that period, French territory extended to cover much of the continent and Empire style was exported to Napoleon’s new courts. France’s prominence as an international power made it a leader of fashion and so Empire style became influential across Europe.

Having acknowledged his influential role in the development and spread of the Empire style, perhaps now is an acceptable moment for me to admit that as a child my awareness of Napoleon as an historical figure was coloured (hopefully not indelibly!) by memorable portrayals of him in two ‘decidedly-historically-inaccurate’ film productions.

And so I shall leave you with my Napoleon film-fact for the day: