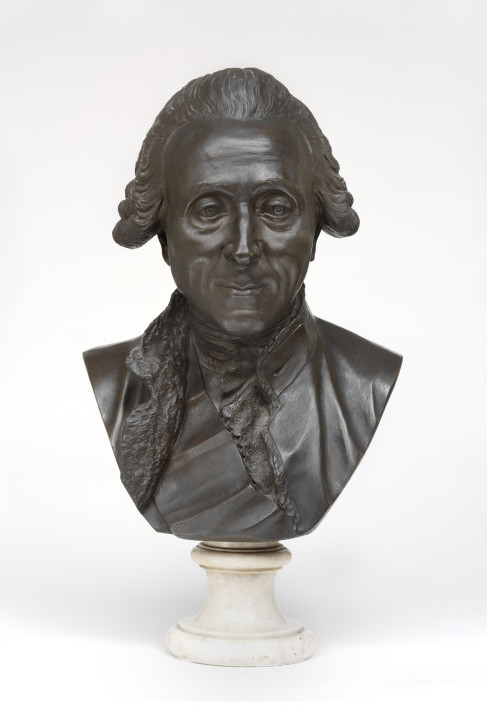 Born this day in 1708,  the French architect and structural engineer Jean-Rodolphe Perronet was admittedly not technically a ‘builder’ but he was the man responsible for the design and construction of many key bridges in 18th-century France.

Perronet improved the network of bridges and roads across France, and established the first school for training bridge and road engineers. He was a high profile figure, presented with several honours for his work in his lifetime and today is perhaps mainly known for his legacy of stone arch bridges.

This bust of Perronet, by the sculptor Pigalle, will be displayed in the Europe Galleries where it will feature in Gallery 4: The Salon, a space exploring the impact of the Enlightenment in Europe.

‘Engineer. Engineers are constantly perfecting major roads, building bridges, embellishing streets, maintaining and repairing canals. An engineer’s work requires much study. The fundamental sciences are arithmetic, geometry, mechanics, and hydrology. An engineer must have some ability in drawing. Physics are necessary to judge the nature of materials.’ (The Encyclopédie)

Perronet became director of the Bureau des dessinateurs du Roi (Royal Office of Designers) in 1747, where he trained bridge and road engineers. The Bureau later became the Bureau des élèves des ponts et chaussées, then in 1775 was renamed the École des ponts et chaussées. He was appointed Engineer to the King in 1763 and was a member of the academies of architecture and the sciences.

Our bust shows Perronet with his coat turned and drawn back on the left side to reveal the broad ribbon of the Order of Saint- Michel. The Order of Saint-Michel was a chivalric order, abolished in 1830 but considered as the precursor of today’s Order of the Arts and Lettres.

Perronet had been Engineer to the King for over twenty years by the time his friend Pigalle made the bust. A lengthy and touching inscription on the back of the bust specifies that Perronet was aged 76 and ‘his friend’ Pigalle was 71 when the portrait was carried out. The bust was shown in the Salon of 1785 and was to be Pigalle’s last work.

Perronet’s most well-known work should be familiar to visitors to Paris. It is the Pont Louis XVI (later renamed Pont de la Concorde), the arch bridge which stretches across the Seine, connecting the Quai des Tuileries (Right Bank) and the Quai d’Orsay (Left Bank).

The construction of this bridge had been anticipated since 1755, when construction of place Louis XV (now place de la Concorde began) but it was not until 1787 that Perronet was commissioned to design and oversee its construction.

This was a tempestuous time for carrying out construction but their work continued during the French Revolution. They even made use of stones taken from the demolished Bastille (taken by force on 14 July 1789) for masonry. Work was completed in 1791.

Today the street off the Boulevard d’Inkermann (near the site of the École des ponts et chaussées) is named after Perronet.