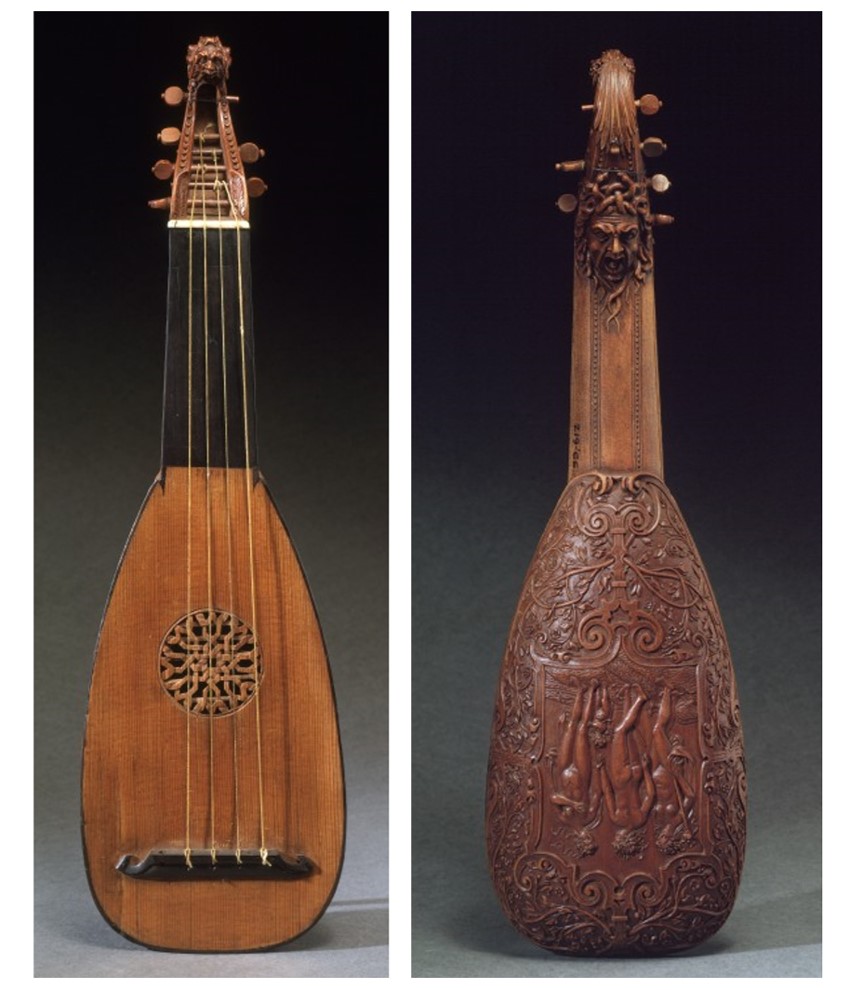 It is always rather rousing to hear how museum objects can inspire, inform and entertain people in such a variety of ways. I’m particularly interested in when historic objects instigate or influence the making of a contemporary piece.

This meant that last week I was very pleased to receive an email from Ian Pittaway letting us know that he had just published an article on the making of a new mandore. This isn’t just any mandore, its design is based on elements of the charming Boissart model which is going into the Europe Galleries.

Ian is a musician who specialises in mediaeval, renaissance and baroque plucked strings – lutes, cittern, gittern, bray harp, etc. Ian had asked Paul Baker, an early instrument maker and early musician, to make him a mandore based on our Boissart model. Paul makes gitterns, hurdy gurdies and a variety of other strings; plays mediaeval and renaissance music on wind and gurdy; and most importantly was up for the challenge.

In January 2014, Ian and Paul visited our stores at Blythe House to take a closer look at our mandore. You can read Ian’s observations and thoughts about this session it in the second of his series of three articles here.

Starting from the early 16th century, the mandore flourished as an instrument for nearly 200 years (making it a particularly apt inclusion for our galleries’ time period!). In his first article, Ian traces the history and pre-history of the mandore, and its arrival into the world, which he describes as ‘the result of a union between two mediaeval string families: the oud and the lute on one side, and the gittern on the other’.

The body, neck and pegbox of our mandore are all carved from one piece of pearwood. The shallow, rounded-back is beautifully decorated with a scene of The Judgement of Paris – this was a popular decorative theme which depicted the mythical beauty contest between the goddesses Juno, Minerva and Venus.

The neck doesn’t have any frets and has rather plain decoration. In my opinion, this simplicity makes the enthusiastic carving of Medusa’s head on the back of the pegbox have that bit more impact.

As Ian describes in his very detailed study of the mandore: ‘the 7 tuning pegs and their holes on the pegbox are uniform and clearly original. We have 6 pegs extant and 1 missing. But the holes in the bridge and the grooves in the nut are for 5 single strings. We are looking at an instrument that has been modified to reduce the number of strings by replacing the bridge and the nut.’

When the mandore was first received by the Museum it was noted that it was signed and dated ‘Boissart 1640’ on the edge of the body. It was previously thought that Boissart was perhaps an otherwise unknown but highly skilled maker, but now the thinking is that Boissart was perhaps not the maker but instead the person who restored and modified the instrument. Ian discusses this in the ‘Mandore Mysteries’ section of his second article which includes interesting discussion about the inscription of dates on musical instruments. By chance, this section makes reference to a bell cittern by Joachim Tielke which will also be going into the Europe Galleries.

For those who have previously only seen photographs of our mandore, its physical size often comes as quite a surprise. Its total length is 42 cm and it is just over 12cm wide. Not wanting to give too much away about how his mandore turned out, I thought that this photograph of Ian and Paul very helpfully demonstrates the mandore’s size (and also the enjoyment it can bring!).

I’ll just end by strongly encouraging you to go and have a look through Ian’s meticulously considered articles to see some wonderful photographs showing the creation of his mandore – here. Be sure to listen to the recordings he has included of him playing some early 17th-century compositions!