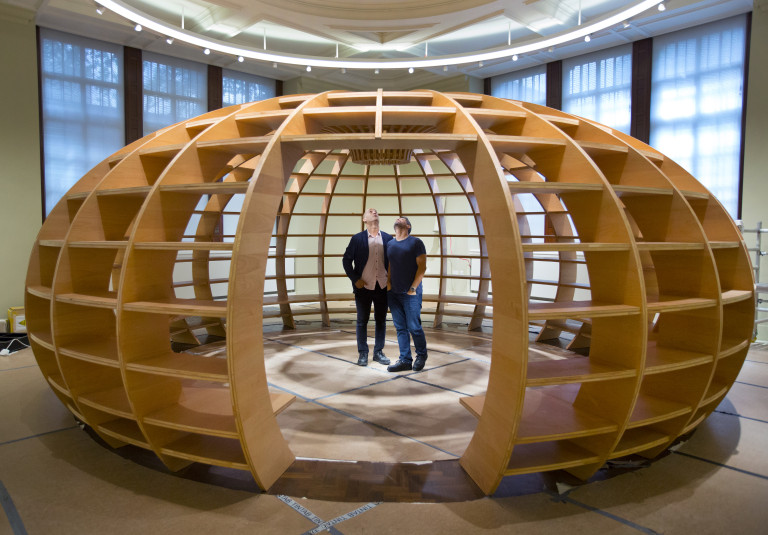 Some of you may have seen press reports in recent weeks, announcing the installation of ‘The Globe’, an exciting contemporary commission in the Europe Galleries.

The Globe is a curved architectural sculpture made from a lattice of engineered beech that forms a ‘room within a room’. Whenever I need to visit the galleries (as part of our pre-installation prepping) I always make a point of popping along to admire this lovely smooth beech creation. Today I thought I’d just take a moment to explain a bit more about the intention and inspiration behind its design.

The Globe has been designed by Los Carpinteros (the carpenters), an artist collective that was established in Havana in 1992. The duo (Marco Antonio Castillo Valdes and Dagoberto Rodríguez Sánchez) work between Madrid and Havana and have received international acclaim for their sculptural pieces. The Globe is their first major project for a London museum. The physical structure was fabricated and engineered by TinTab.

Los Carpinteros were asked to design a large-scale, thought-provoking contemporary installation for Gallery 4: The Salon. This gallery examines the theme of the Enlightenment. We wanted something that responded to this and would offer visitors an opportunity to pause and reflect as well as engage with some of the complex concepts involved. We also wanted to introduce visitors to a different kind of aesthetic experience to the rest of the galleries.

The structure refers to several images from the Age of Reason. It can be viewed variously as a hemispherical map of the world, a bookcase, an interior from a great library classifying all human knowledge, a symbol of the universe, or an architectural model. I particularly like how its design reflects not only the world but also, with its bookshelf/cell-like construction, the organisation of knowledge – which was central to Enlightenment thought.

An additional interpretation is of the structure being like a cage. An important reference for Los Carpinteros has also been the late 18th-century ‘panopticon’ – a circular jail in which a single guard located at the centre could keep watch over hundreds of prisoners. Los Carpinteros described The Globe as “the culmination of a 20-year fascination with the idea of the ‘panopticon.’”

First devised in the 18th century by Jeremy Bentham, these structures promoted surveillance and control and were originally intended for prisons. Los Carpinteros envision The Globe as reinterpreting this format as “an observation point” midway through the galleries.

You can see Los Carpenteros’ interest in the ‘panopticon’ and their approach to creating structures reflected in some of their other work.

Los Carpenteros have described The Globe as a construction where: “our work as artists, craftsmen, designers and carpenters has a rare practical utility and function alongside its symbolism – with pleasingly ambiguous results.”

Like the salons of the 18th-century, where the ideas of the Enlightenment were debated and music was performed, The Globe provides a space for conversation, programmed salons, and special events. We will of course keep you updated on future events scheduled for this rather special ‘salon-space’.

I know that our national museums think that they must have a contemporary installation ( to show how”in touch” they are?) but I really do fail to see why this is the case with the Europe 1600-1815 galleries at the V&A. Seven rooms is hardly a vast space to show this time and geographical spread and, as Dawn herself has said, it has needed careful selection from the V&A’s large collection. Now space is being given to an object which is far outside the period! And the money too surely could have been spent on an appropriate object; perhaps a Houdon bust now that the “Voltaire” is recognised as a 19th century copy?!

Thank you for your interest in the Europe Galleries.

There will actually be a number of objects in Gallery 4 that the commission relates to. These include: works by Augustin Pajou; an early sculpture by Etienne-Maurice Falconet; a striking bust by Franz Xaver Messerschmidt; and a bust of the Marquis de Miromesnil by Jean-Antoine Houdon. There will also be two volumes of Diderot and d’Alembert’s Encyclopédie, a key publication of the period that has been described as ‘the voice of the Enlightenment’.

The commission of The Globe was conceived as a way of representing the Enlightenment in a different way and providing a point of repose for visitors at the midpoint of busy, bustling galleries that are rich with objects. It provides a space in which to reflect on how the Enlightenment has influenced today’s world and the connections between the 18th century and the 21st century.

The Globe has an additional role as a new location within the galleries for salons and events to take place – an important way of bringing the ideas of the period alive.

The Museum takes great pride in the way that its historical collections are complemented by contemporary work – both permanent and temporary.

We look forward to the various reactions and opinions of visitors to The Globe when the galleries open.

Dear Dawn,
Thank you for explaining further the concept of the Globe installation including its role as a space for reflection and repose. I’m sure that it will be appreciated for these reasons as there will be so much to see and enjoy in the galleries.
I will, of course, reserve my final opinion until I can see the Globe in place and in use. Do you have any more photos of how the gallery set-ups are progressing?
Best wishes,
Robert

Dear Robert,
Thank you for your reply. I will be posting up things soon as we progress through installation.
Best wishes,
Dawn