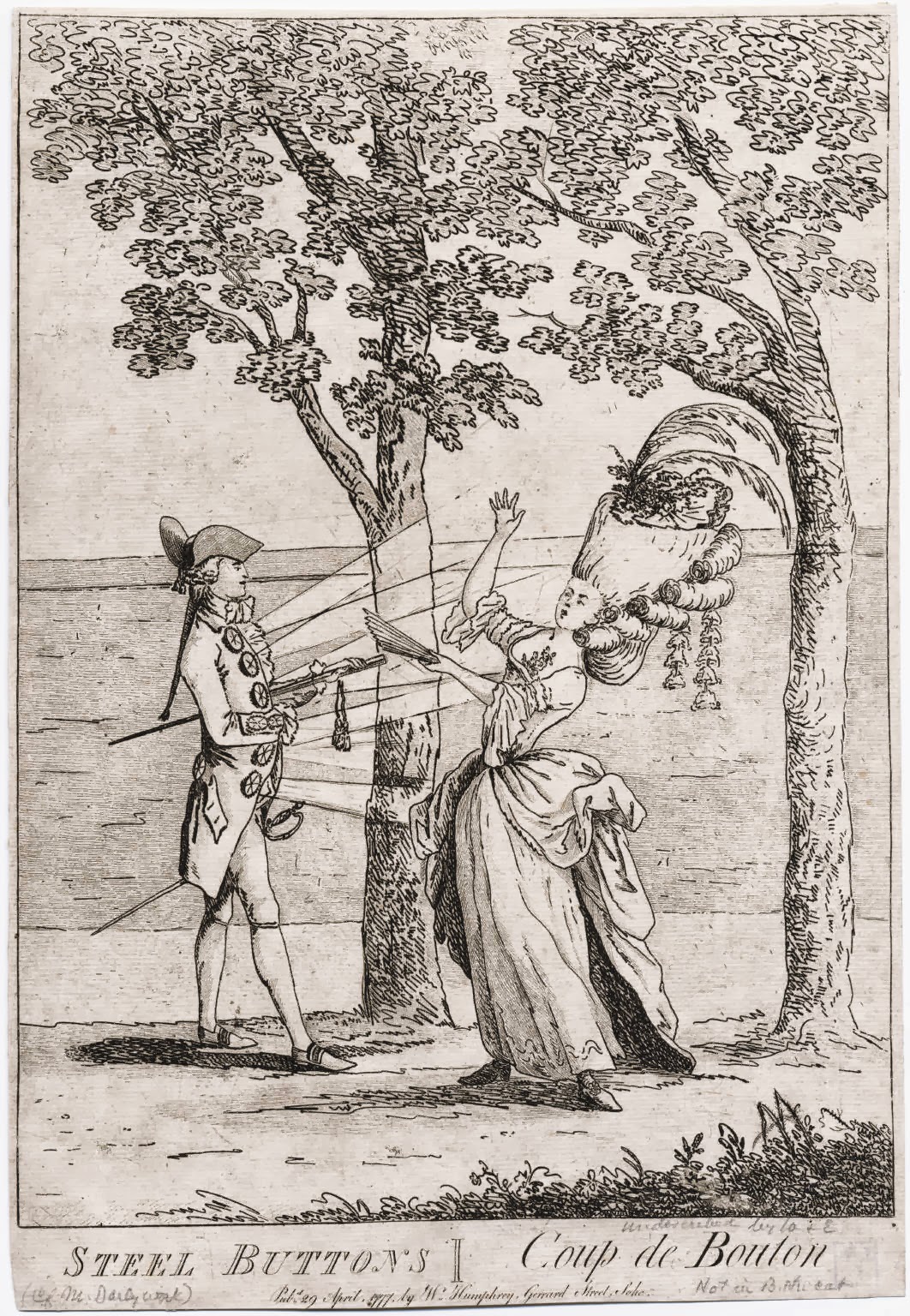 In my last post I mentioned how ‘Anglomania’ influenced the adoption of darker colours for men’s daytime clothing among the middle and upper classes in late 18th-century France. This move towards a more somber palette brought about a dependency on buttons to create the maximum sartorial impact. A basic rule often seeming to be ‘the shinier the better’.

Decorative buttons provided a distinguishing feature, introducing a sense of individuality to garments which (with their similar cut and colour tones) may have easily been mistaken for one another. The 18th century has been described as the greatest period in the history of button design. Jeweled designs in particular became increasingly ingenious.

I made a point of counting up just how many of these sparkling accessories had been added to the whole suit.

The coat has 7 buttons running down the front. Notably, the buttonholes for these are all closed, meaning that the buttons were never actually ‘buttoned’. The coat would have been left open to display the waistcoat (or more particularly its buttons) beneath, held only by hidden hooks that fastened across the upper chest. There are also 3 buttons on each cuff, 3 below each pocket flat, and 3 evenly spaced on each back pleat (top, middle and bottom). Total: 22

The design of the buttons on the waistcoat match those on the coat but are smaller and do actually function as a fastening at the front. There are 7 open buttonholes down the front, but only 5 corresponding buttons still attached. Each of the two pocket flaps sport 3 buttons. Total: 11 (originally 13)

The breeches have 4 cut-steel buttons at each vertical leg opening with corresponding buttonholes. A number of other buttons (approx. 14) were also usedin the construction of the breeches, most of which would probably have originally covered in the same fabric as the breeches. Total: 8

This brings the total number of steel-cut buttons originally used on the suit to an impressive 43!

I was lucky enough to be able to take a very close-up look at the buttons on our suit as Diana, one of our Senior Metals Conservators, worked on cleaning and stabilising all 41 of them.

Sheets of acid free paper were laid over the suit and plastic guards were placed around each button to protect the fabric from the substances being used.

The corrosion and dirt that had collected on the buttons had not been so immediately obvious beforehand, mainly due to their sitting against such a dark fabric, but the effect once they had been cleaned was startling, as each of their many facets began to sparkle.

Steel-cut buttons were an awkward product to manufacture. The basic technique was to attach highly polished steel studs (or rivets) on to a perforated steel or brass base plate. Each stud was individually faceted (cut) and polished before being riveted to the base. The more facets each stud had the brighter and more sparkling its effect. Early studs were often produced with as many as fifteen facets making them particularly bright and sparkling.

Cut-steel buttons are the type of goods classified as ‘toyware’ in the 18th century.The French made steel items like this but the English had raised the manufacture of cut-steel to a very high standard and there was a substantial trade between France and England (notably Birmingham, Sheffield and London). The buttons on our suit were very probably made in one of these English cities.

In 1759, the button-manufacturer John Taylor and toy-maker Samuel Garbett claimed before a parliamentary committee that there were ‘at least 20,000 People employed in the Toy Trade at Birmingham, and the neighbouring Towns about’ and that trade ‘amounts to about £600,000 per Annum, about £500,000 … of which is exported to foreign Markets’.

Cut-steel accessories were stocked by high class retailers in Paris, who imported English-made goods, such as Madame Blakey’s Magazin Anglois  (English shop) in rue des Prouvaires, very  close to the prestigious rue St Honoré. Many of those who traded with France were of French Huguenot descent, such as Peter Chamont of Glover and Chamont in Birmingham. Cut steel looking like either diamond or stone was one of their main specialities, probably reminiscent of the sophisticated buttons on this suit.

Cut-steel accessories had been produced in England as early as the Elizabethan period, but developed into a serious concern in the 1700s as demand grew.The ability of cut-steel to replicate the sparkling effects of cut diamonds partially accounts for its great popularity in France in the mid-18th century, as sumptuary laws there regulated who could wear diamonds and precious metals. Cut-steel therefore provided a stylish and popular jewellery material that could be enjoyed by more people, although the detailed level of work required for their production meant that they still remained a pricey purchase.

As the fashion for eye-catching buttons developed, they became increasingly large and dazzling, with some as big as two inches in diameter. As with any conspicuous fashion, the trend for such ‘outlandish’ buttons became the subject of satirists. During the 1770s a number of satirical prints were produced, depicting fashionable young men with ridiculously over-sized and dazzling buttons. My favourite of these is a 1777 print entitled ‘Coup de Bouton’, which shows a dashing young gentleman’s buttons blinding an unlucky young lady passing by.

Would you be able to provide information on how the buttons were cleaned and restored?
Thank you.

Hi, I’m currently doing a research project at University on 18th Century Waistcoats and wondered if you could give me any more information on the satirical prints about the dazzling buttons, or point me in the direction of where I might find more examples of them? Many Thanks.

Hi Jodie,
I found the ‘Coup de Bouton’ print in the Lewis Walpole Library. They have five other nice satircal prints featuring over-sized and particularly shiny buttons, which you can call up by simply searching for ‘buttons’ in their search engine here: http://images.library.yale.edu/walpoleweb/default.asp
These same prints seem to turn up in a number of other collections and I haven’t come across any other particularly striking examples yet.
[NB: you will notice that the large dazzling buttons are frequently just depicted on the coat rather than waistcoat.]
I would also try having a search through the various collections of satiric fashion plates produced at the time too which may feature exaggerated buttons even when they are not the specific target of the print.
Best wishes,
Dawn

I previously replied to Helen Roiz via email, but for other readers interested in the conservation of the buttons, here is an explanation of the process from Conservator Diana Heath:

‘The steel buttons were encrusted with rust patches to varying degrees. In some places this had ‘eaten’ into the surface so the rust needed to be removed or stabilised. To enable maximum control the rust was removed mechanically, using a high powered binocular microscope and a range of hand tools including a scalpel , needle tool and synthetic rubber ,in order to literally ‘pick off’ the rust and reveal the polished steel finish. This has to be done with great care and accuracy.

Rust particles and dust were brushed off gently, with a soft hair brush and each facet of the button further cleaned to remove grease and remaining residue was done using with small cotton wool swabs dipped in Industrial Methylated spirit (IMS).

The textile was protected with clear, acetate sheet placed around each button, to prevent any rust particles being transferred, during the treatment process. No coating was applied to the buttons,as the suit will be displayed cased and in a controlled environment.’

Just stumbled upon this! What a wonderful article! I was hunting for examples of 18th century cut steel and I am so grateful for the detailed picture and the awesome information about how you cleaned them.