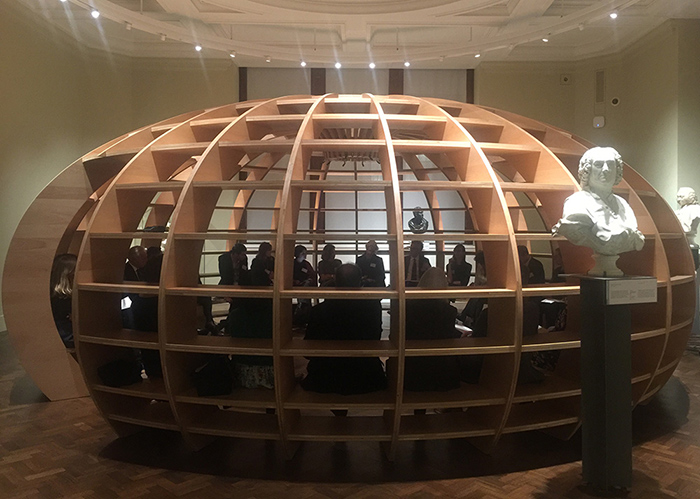 To celebrate the opening of the new Europe 1600-1815 galleries, the V&A, with the support of the British Academy, is hosting a series of Salon evenings. Leading academics and ‘rising stars’ in research right now have been invited to discuss variations on the overarching theme of the series, the question: “What Was Europe?”

The events are being held in the Europe galleries themselves and have been designed in the style of an 18th century Enlightenment Salon, an informal meeting place for philosophers and artists to discuss the issues of the day. After following the preparation stages in the lead-up to the galleries’ opening, it has been really exciting to see them come to life in the evening – as is usually the case with any museum event held after dark.

The choice of location for the Salons has been particularly impressive, as they are held inside The Globe, the huge wooden installation that occupies the entire corner room of the galleries. Those of you who have had a chance to see it in person, and especially if you have sat inside it and contemplated some of its surrounding figures (Voltaire’s austere bust for instance, or Messerschmidt’s more irreverent one), will understand why it is such a perfect location for an evening of intellectual debate.

The Globe was specially commissioned for the galleries, by the Cuban art collective, Los Carpinteros. It was designed as a ‘room within a room’. Once inside, you feel at once separate from those outside and very close to those within it. It changes your perspective immediately and your thoughts take new directions – or in other words, you begin to feel very Enlightened!

We opened the series on the 15th December 2015, with the first Salon: “Where Was Europe?” At each event, three emerging scholars are invited to present their interpretations of the theme which then kick-starts the conversation.

Of course the Salon themes have been designed to give consideration to not only historical but also current social and political questions. One important aspect of the first debate was thoughts around where to draw the borderlines of Europe. Two of the speakers – Dr Helen Pfeifer (Cambridge) and Dr William Kynan-Davies (Aarhus) – are both Ottomanists, and pointed to present-day Turkey as a possible border to Europe but also that half of Europe was under Ottoman rule during the period discussed and displayed in the galleries. Whether today’s Turkey lies within or outside of Europe however, was a matter for further discussion.

Dr Pfeifer also brought to light the fact that her specialism was not really covered in the Europe galleries (for Ottoman history we must go ‘around the corner’ to the Islamic and Middle East galleries) although she presented that many of the objects on display in the new European Galleries in fact have Ottoman background and influences.

This is why the location of the Salons in the galleries is so important. The objects surrounding the speakers in the new Europe galleries, as well as other adjacent displays, provide endless fuel to their debates on the European question and we will surely see more of this in the coming weeks.

Fortunately, the debate is not closed door and the Salons are being recorded which means everyone will have the opportunity to listen to them online via a podcast. The first Salon, “Where Was Europe?”, can be listened to here and we welcome your own contributions to the discussion in the comments section below. An edited version is also available if you do not have time for the full 90 minutes.

The next Salon, “Europa vs Britannia”, will also be made available to listen to online soon. As we watch the ‘Brexit’ debate unfold in the newspapers, this conversation will undoubtedly be as relevant as the first.

Listen to Salon I ‘Where was Europe?’ [Full version]

A better question is “Where is Central Asia?” because THAT’S your homeland. Not Europe or Britain…which you Anglos now call England.