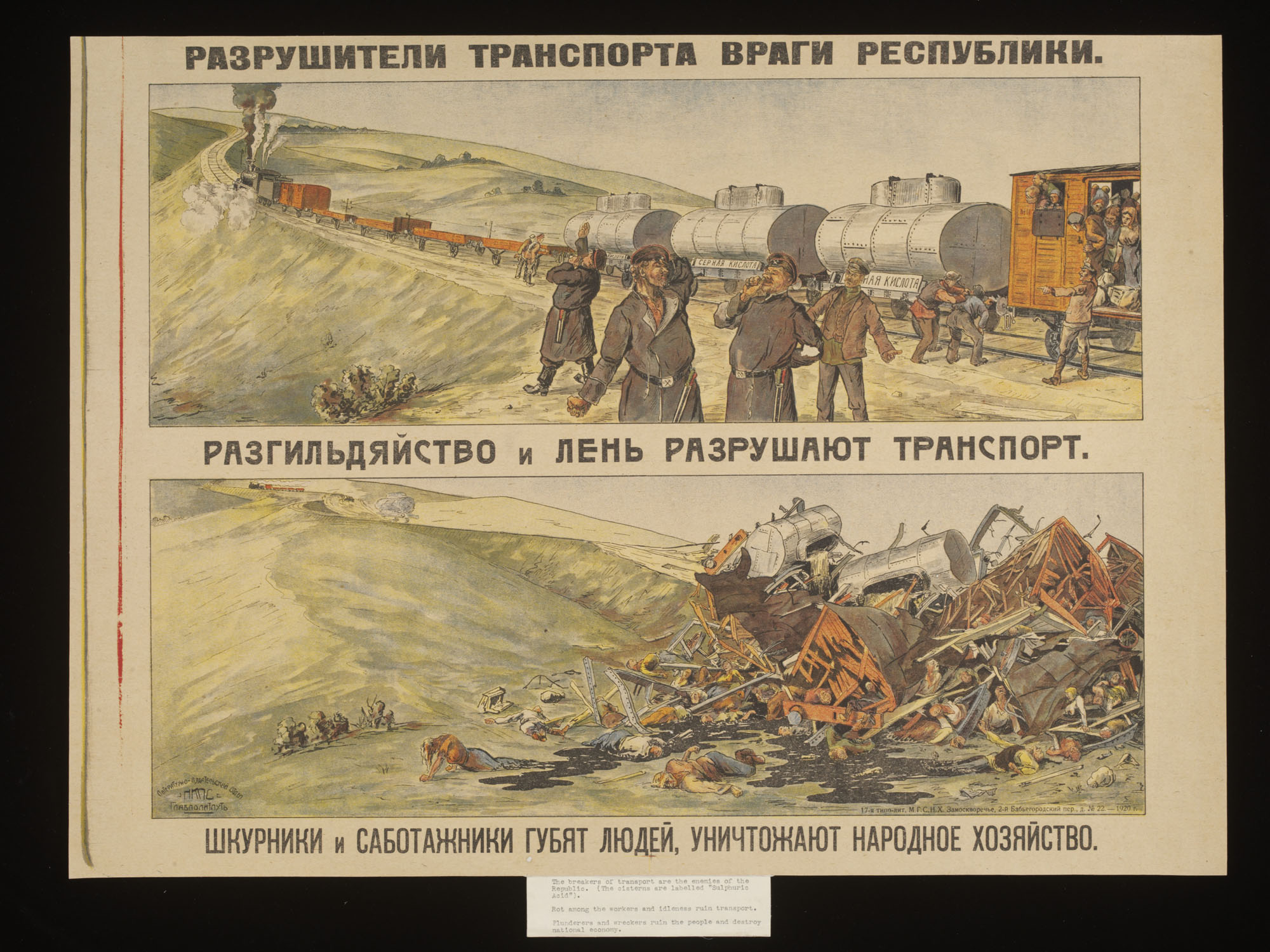 A devastating explosion destroys a train, throwing dead and injured people into the Russian landscape. Why was this a regular enough occurrence in the 1920s to merit a poster warning against it, and who is to blame?

This anonymous but government -produced poster addresses several threats to the railways and their cargos of people and goods. The Russian text says:

The breakers of transport are the enemies of the Republic

Rot among the workers and idleness ruin transport

Plunderers and wreckers ruin the people and destroy the national economy

The top image shows a train stopped, with guardsmen in the foreground looking distracted. Behind them people are gathered round the train. The tanks contain sulphuric acid. The lower image shows the aftermath of an explosion.

Why were trains so vital in Russia? Russia is the vastest country in the world. Towns and cities are separated by hundreds of miles of countryside. Moving supplies around the vast empire was always difficult, but was made easier and faster with the introduction of railways from the late 19th century. This poster has the mark of the railway company NKPS, The People’s Commissariat of Communications of the USSR, known as Narkomput. The NKPS managed the railways in the 1920s when this poster was made.

From the beginning, railways were vulnerable to attack from bandits. Some thieves, known as ‘koshki’ (cats), would use hooks to snag items and pull them out of the windows. Guards were employed to protect the railways. This late 19th-century painting shows a train watchman.

This situation was even worse during the lawlessness and chaos of the early 20th century, when Russia suffered during WWI, the Bolshevik revolutions and the civil war. During this time more than 60% of the train tracks and over 80% of trains were destroyed.

The poster was produced in 1920, in the middle of the civil war between the Bolshevik Red Army under Lenin, who had come to power in the 1917 revolution, and their rivals the White Army, who opposed the Bolshevik’s socialist government. During this period it was difficult to keep control of the vast country. The problem of banditry increased as gangs took advantage of the chaos to run riot in the countryside. Trains, along with other state facilities such as warehouses, were targets for anarchist mobs. Many trains and tracks were destroyed as political acts against the Red Army’s authority. The figures in this poster seem to be checking the train, as passengers watch – perhaps they are inspecting a problem caused by saboteurs?

The government also believed that the railways could be undermined by corrupt or inept employees. As this poster shows, the guards were not always as responsible as they could be. They look away, and one picks his nose, as the train is endangered behind them.

Posters were often used in Russia in the early 20th century as the level of literacy amongst the general public were not high. This poster was produced by the Mocgublit – Moscow city council of national economy. This was the government department that governed economy and put out information.

Our poster is characteristic of those made in Russian in the early 20th century. These often had stark, sometimes shocking images, in order to get attention and reaction from those who saw them.

Posters produced during the civil war often focused on the government’s perceived enemies – both external and internal. This poster is a good example of this. Sabotage from followers of the white army was as much a threat to the country as moral flaws such as laziness and incompetence. Corrupt practices such as bribery or profiteering were seen as traitorous to the new Soviet Republic.

Ironically, the Bolshevik party itself had a background in banditry. In the 1910s, when it was an underground movement, its supporters would raise money through theft. A particularly impressive train robbery that provided 250.000 roubles for the party was undertaken by none other than Joseph Vissarionovich Jughashvili, known later as Joseph Stalin, leader of Russia from 1924. The Bolshevik government was reaping what it once sowed.