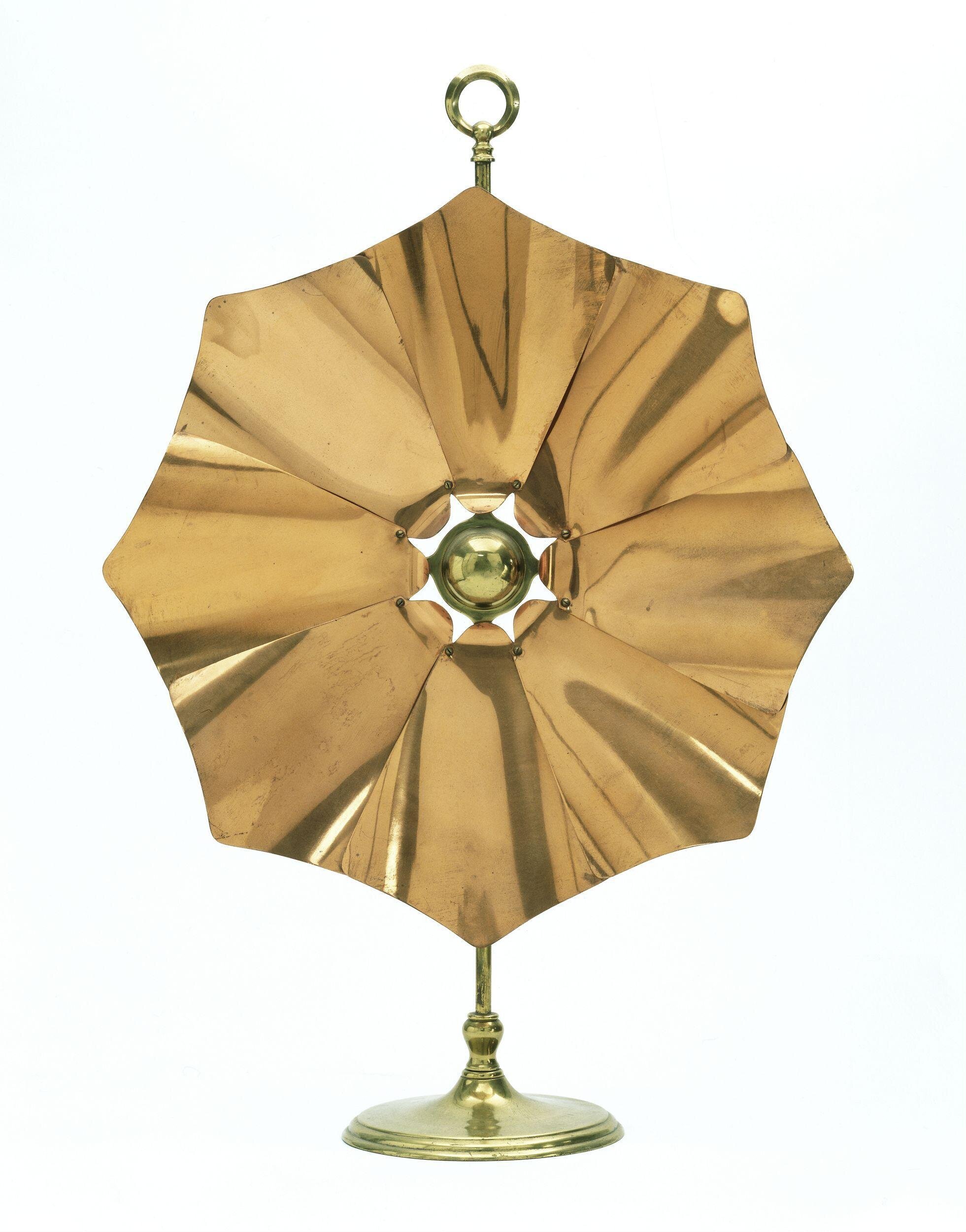 When you search for copper as a material in the V&A collections, there are 2,116 objects that contain it, including a seventh-century ewer and Thomas Heatherwick’s 2012 Olympic cauldron. Although it has a millennia-old history of use, it has become in particular a design darling of the last few years, coveted for its sleek reddish tone which looks great on everything from lamps to luxury apartments. During the pandemic, copper also became championed for its anti-bacterial properties. As a result, between March and July 2020, it had a 50% growth surge on the London Metal Exchange. The implicit idea was that you can fight the virus with copper and look good doing it. But how much of this is true, and how have designers in the past balanced the relationship between copper’s utility and its aesthetic allure?

Design has a long history with copper, mostly placing function at the fore. Before the twenty-first century, copper was used primarily for its mechanical properties. Copper is easily cast and malleable, making it the perfect material for a variety of design applications. Copper has been used as piping in city infrastructure since at least 2,750BC (where it has been found at a funerary complex in Northern Egypt), and many of the pipes that carry water in the UK today are still made of copper, which has been shown to help with water purification. Above ground, copper was used as roofing for Grecian temples, ship cladding, and took off in the 19th century as a material for interior and exterior building elements. Printing presses used engraved copper plates to print illustrations and bronze (an alloy of copper and tin) matrices were used for casting metal type.

Electronics have also taken advantage of copper’s natural conductivity. Copper was an essential element in the first true battery, invented in 1800, and in IBM’s first computer chip, developed 197 years later. Conversely, copper has also been used to interfere with electronic signals. The buildings of the US National Security Agency in Fort Meade, Maryland use copper sheathing to stop spying radio signals from entering through the walls.

With the onset of the pandemic, copper has been played up as a miracle material for a different talent: its ability to destroy microbes. Copper has historically been identified in relation to human health. It is included in the 1st-century treatise De Medicina, which lists six different ways copper can be used in medicine. In 2008, De Medicina’s word was vindicated by the US Environmental Protection Agency, which approved the public health claims of antimicrobial copper, acknowledging that copper and bronze can kill microbes on contact. This has led to a boom in antimicrobial copper designs, further accelerated by the COVID-19 pandemic. Fearing virus transmission, when it was unclear early in the pandemic that Covid is a respiratory disease, we saw designs ranging from touch tools to mobile testing units to ‘full metal jackets’, all emphasising the inclusion of covid-crushing copper

But is this magical copper-tinted thinking? Copper does have antimicrobial properties, but it takes around forty-five minutes for pathogens to break down on copper, and not all copper products have the same material integrity. With high-contact, stationary objects, however, like doorknobs, copper is still a great material for reducing microbe transmission. For that reason, Bill Keevil, a professor of environmental healthcare at the University of Southampton, has suggested architects and designers leave or include copper and bronze fixtures like doorknobs in buildings. However, the copper touch tool you’re using to push elevator buttons will not kill viruses on contact, so it is probably easier to just wash your hands.

Design’s relationship to copper, particularly in the context of the pandemic, emphasises how it is our actions that matter more than our materials when it comes to fighting disease. Though copper’s antimicrobial proponents do have valid claims, for the majority of designers and consumers, focusing our efforts on mask-wearing and designing better ventilated spaces to reduce the risk of disease will prove far more effective in the long run. But of course, we wouldn’t say no to copper fixtures if they’re in the plans.