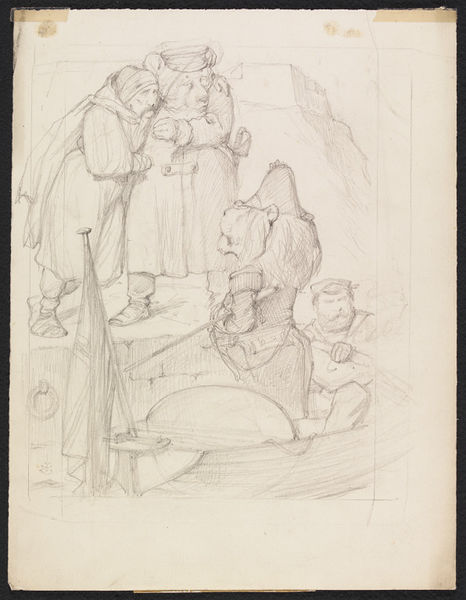 John Tenniel is best known for his illustrations to Alice’s Adventures in Wonderland, but he was also a prolific political cartoonist, visually commenting on the news for satirical magazines like Punch. He used his skill for depicting interesting episodes and characters in current affairs as much as in his work illustrating literature.

With my interest in Russian history, I was intrigued to find a striking drawing for a cartoon by Tenniel relating to the war between Russia and Turkey (then part of the wider Ottoman empire) in 1877 – 8. The cartoon was published in Punch in 23 February 1878. At this point in the war, the hostilities had officially ceased between Russia and Turkey due to an Armistice Convention signed on 31 January 1878. England was involved as a ‘neutral’ negotiator, but occupied part of the Ottoman empire as thanks for their role as intercessor.

However, Russia soon ignored the term of the treaty and advanced towards Istanbul, intending to take the city while the Ottoman empire was weak. The fortifications of the city can be seen in the background of Tenniel’s cartoon. In the published version the shore is identified in as ‘off Stamboul’.

Tenniel creates caricatures of the three nations to visibly define their qualities. Turkey is portrayed as a weary, wounded man. He is the loser in the war, unable to continue the fight or protect himself any longer. He leans against Russia, a robust bear in military uniform. Russia was often characterised as a bear – I’ve explored this in previous posts. The bear, like Russia, is wild, unpredictable, strong and cruel.

In front of them, in a boat, is a proud, brave British lion. Britain sent ships to stop Russia attacking Constantinople, to protect the Christian citizens of the area and to guard its newly acquired Ottoman territory.

The published version features text with the lion declaring his desire to come ashore. Turkey, now tightly under Russia’s grip, responds saying there is no need as they have just declared eternal friendship with Russia.

It is clear from the image that Russia is not to be trusted. They are clearly dominating wounded Turkey and have shown they do not respect the peace treaty drawn up only weeks ago.

As with every war, there is fault and cruelty on every side, but a political cartoon is a form of propaganda that casts the favoured side in the most sympathetic light. Tenniel’s cartoon uses caricature to exaggerate the characteristics of the protagonists, and simplifies a complex hostile situation. He patriotically depicts a heroism and selflessness in the English side, whereas their motives were not so pure in their desire to protect assets won at the expense of other nations. Readers of Punch would see an easily understandable version of events and may or may not question how credible or true it is. But, as Alice might say, ‘sometime I’ve believed as many as six impossible things before breakfast’.