As every bibliophile knows, the main problem with books is how quickly they take up space.  It starts off harmlessly enough, and then before you know it a casual second-hand buying habit  quickly escalates into an in-house version of Matej Krén’s book installation art, in which books start to become the buildings they inhabit.  One ‘essential’ purchase leads to another, until suddenly out of nowhere you have eighteen miles of books and counting, and you need more of a book elephant than a book donkey: 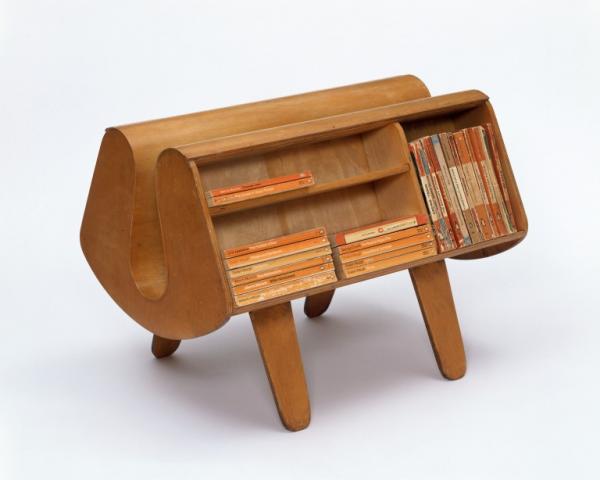 Books have posed different but related challenges during the exhibition design of ‘William Kent’. On the one hand, they’re absolutely essential to the story we’re telling, since it was predominantly through a thriving literary culture that ideas, not to mention designs, could spread so quickly and influentially in the 18th century. Books such as Andrea Palladio’s ‘I Quattro Libri’ served as the visual currency for architects and designers who imitated Classical and Renaissance forms, and Palladio’s ‘Four Books’ was the major architectural influence on William Kent and his patron Lord Burlington. On display in the exhibition is Burlington’s own, annotated copy of ‘I Quattro Libri’, which he acquired in Italy in 1719.

At the same time, books can be very difficult to display to their full advantage. Most of the books we’re showing are about 300 years old, and so need a lot of TLC in the Conservation studios before they are ready for display: 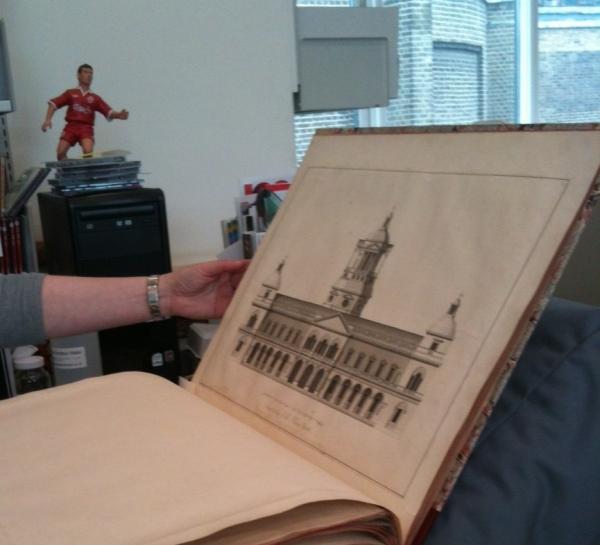 Each book is carefully assessed and measured for an individually-made cradle that will support it during the run of the exhibition. The cradles are so precise that they are measured for the exact page opening specified by the curators. This means that tough choices have to be made about what’s the ‘best’ or most important page early on in the planning process.  Additionally, books as large and as old as this also have to be displayed completely flat, which takes up a surprising amount of room in our showcases! It’s especially difficult to judge the spacing of the books inside each case since we’re borrowing volumes from a variety of different libraries and individuals, which means we haven’t seen everything together in one place yet. So to be on the safe side, the exhibition team thought we’d better double check that everything fits into the cases as planned.

Ta da! A little mock-up of each showcase/bookcase: 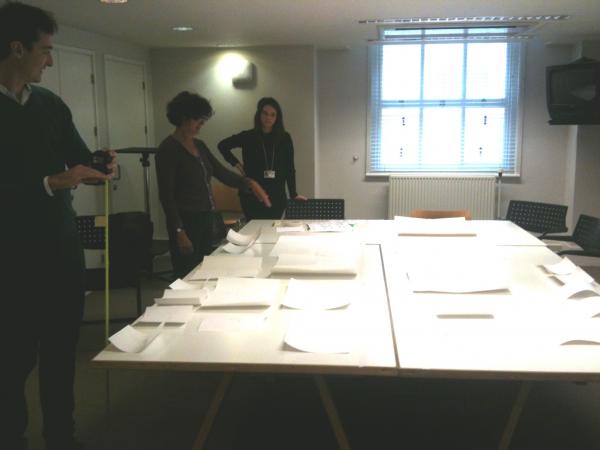 This part of the exhibition process led me to think about William Kent’s own books, which were sold after his death at an auction in Covent Garden. I found the catalogue for the sale, which was of 114 volumes, and took place on Valentine’s Day, 1749. It’s interesting to see what he owned! A copy of Palladio, of course, which is described as ‘finely bound’; two copies of ‘Cori’s Method for Learning the Italian Tongue’ (apparently the early modern version of ‘Teach Yourself Italian’– useful for an Englishman who’d spend years in Italy); three versions of Ovid’s ‘Metamorphoses’, which helps explain the prominence of classical imagery that I talked about last time. In fact he had all kinds of other interesting books, from Boccaccio’s ‘Decameron’ (in a 16th century edition) to Voltaire’s ‘Henriade’ (1728), to William Dugdale’s ‘Monasticon Anglicanum’ (1655), and, intriguingly, ‘Babington’s Discourse of Artificial Fireworks’ (1635).

It’s perhaps no surprise then, that Kent was very good at designing libraries! To house his patrons’ book he included sophisticated fitted shelving which lined the walls. And on display in the exhibition, alongside our own bookcases, there will be designs for some of Kent’s libraries, including  this one at Holkham Hall. Which is in slight contrast to these ‘shelfies’.