When the latest addition to the British Royal family was named last year, most reliable sources on royal affairs associated Prince George’s name with two illustrious predecessors: his great, great-grandfather, George V, who founded the House of Windsor; and Colin Firth, who played George VI in ‘The King’s Speech’. There is, however, another important George in the zeitgeist at the moment, and that’s George I of Hanover, who ascended to the throne exactly three hundred years ago in 1714. 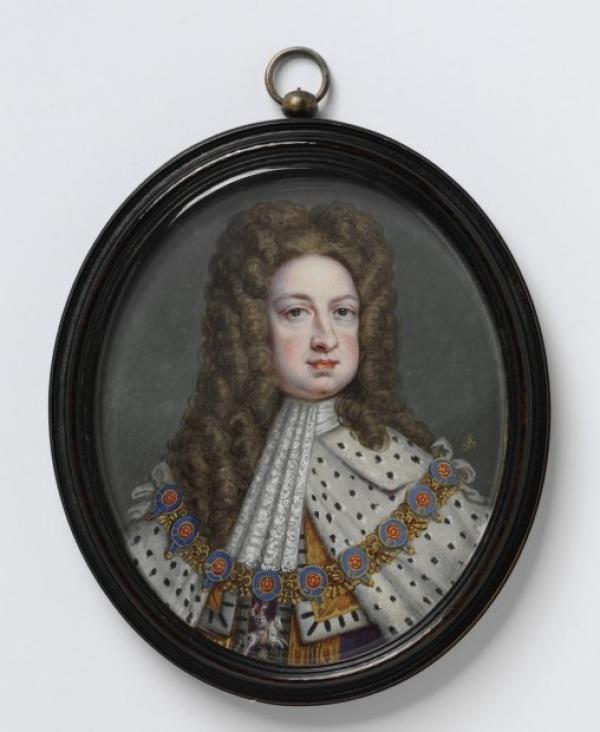 George, who was the Elector of Hanover, wasn’t necessarily an obvious choice as King of the newly-formed Kingdom of Great Britain. He was 52nd in line to the throne, and despite being well-educated, didn’t speak fluent English. He was, however, still alive in 1714 (good), distantly related to the previous monarch Queen Anne (very good), and not a Catholic (very, very good), which as a set of attributes was considered better than anything his Stuart rivals could offer. It was nonetheless a potentially unstable time for the British monarchy, and the Hanoverians recognised the importance of affirming their legitimacy as rightful heirs to the throne. They needed to distinguish themselves from the Stuart dynasty, which they characterised as corrupt (bad), Francophile (very bad) and Roman Catholic (very, very bad). One effective way of getting this message across was through the visual arts, which included buildings, sculpture, pageantry and public spectacle.

Enter (did you see this coming yet?) William Kent. During his time in Italy Kent had developed a profound dislike of the French aesthetic, and with his friend and patron Lord Burlington was determined to introduce a new national style to Britain. This Anglo-Palladian style was favoured by the Hanoverians who claimed ancestral connections with Venice, and thanks to Burlington’s political manoeuvring Kent secured a commission to paint, decorate and furnish the interiors of Kensington Palace for King George I. 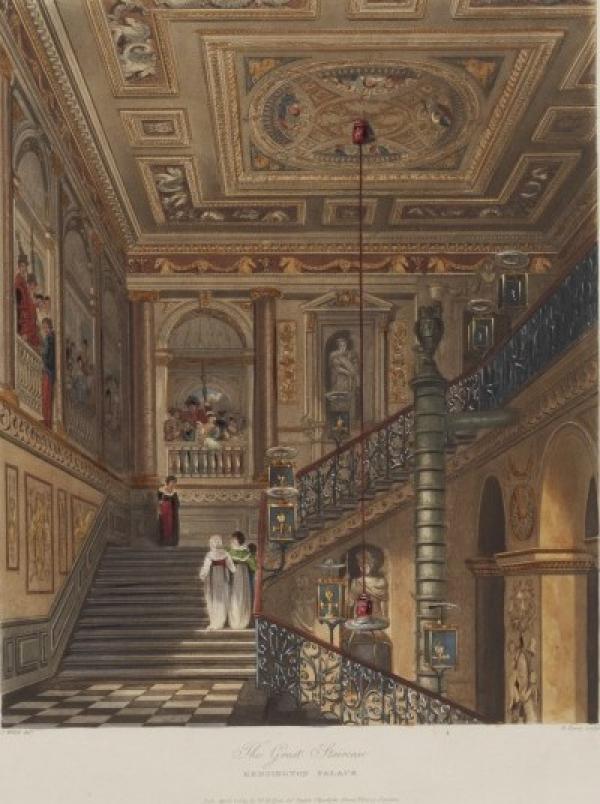 Kent’s success at Kensington Palace led to a host of other commissions for the Royal family, which ranged from a new library for Queen Caroline, wife of George II, to a magnificent barge for Prince Frederick, George II and Caroline’s detested* eldest son: 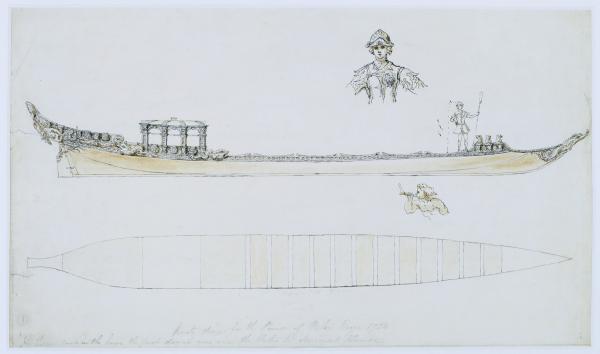 *if this sounds unkind, please be assured the feeling was mutual.

The Georges are thus a very important aspect of ‘William Kent’ (which is, after all, subtitled: ‘Designing Georgian Britain’), and the exhibition forms part of a series of exhibitions and events taking place across London which celebrate the Tercentenary of the Hanoverian Succession. It’s interesting to think that a whole nation over more than a hundred years can be summed up in one word relating to the name of their ruler(s). What can you learn about Joe Bloggs by focussing on George Hanover?

The British Library have cleverly addressed this relationship in their current exhibition by opening the show with a series of magnificent portraits– a parade of Gorgeous Georges that form an impressive façade to the body of the exhibition. You then descend (naturally) to the objects below relating to all the other levels of the society to which the kings lend their name. The approach in ‘William Kent’ is slightly different since we’re making the point that Kent’s work for the Royal family stood in the middle of Georgian society, at the centre of London itself. By showing Kent’s work for the Hanoverian monarchs at the heart of the exhibition we’re trying to show just how engrained the new aesthetic was within society as a whole, and how Kent’s work for the Georges was instrumental in defining the style we now think of as ‘Georgian’.

I repeated to an Oxford History Graduate yesterday about George I being 52nd in line to the throne and he challenged me as to how that could be the case. I have done some digging and find that there were only 6 people living more closely related to Queen Anne than George – and they were all papists and therefore disbarred from the throne. I don’t know how this 52nd in line has come to be repeated so often? One of those mistakes that is not corrected by endless repetition I fear!!