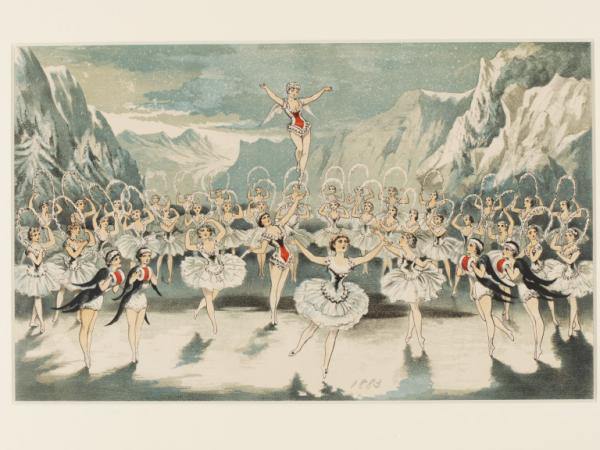 On Friday ‘ES’ the colour supplement that accompanies the London Evening Standard included a feature of what to buy for Christmas. Among its recommendations was a page of Christmas cards one of which was the V&A’s ‘Snow Ballet’ shown above.

The card shows a ballet scene from Voyage dans la lune or Trip to the Moon, originally by Mms. Leterrier, Vanloo and Mortin, with music by Jacques Offenbach and choreography by Henri Justamant. It was one of the most successful ‘opéra-féerie’ created in Paris. Premiered on 28 October 1875 at the Gaîté Théâtre it quickly became an international hit. Translated and arranged for a British audience was first performed in London at the Alhambra in 1876 with the ballets again choreographed by Justamant and then in 1883 at Her Majesty’s Theatre with choreography by Aimé Bertrand, although it is likely Bertrand drew on Justamant’s original.

Voyage dans la lune included two ballets, the more important of which was the ‘Snow Ballet’ which the Entr’acte described as ‘probably the best contrived and prettiest spectacle of the kind that has ever been presented on the English stage’.Indeed this ‘Snow Ballet’ established a vogue for such productions and for the next two decades such winter scenes were reproduced all over the world. The only survivor of this trend is the ‘Land of Snow’ scene in The Nutcracker. It is not by chance that in the Diaghilev exhibition we have displayed the Legat caricature of Olga Levenson as a Snowflake in The Nutcracker just opposite the print of the ‘Snow Ballet’.

The colour lithograph is include in the Ballets Russes exhibition as one of a select group of images that encapsulate the ballet scene before Diaghilev reformed ballet and it is a fascinating record of this work. It probably shows Consuelo de la Brujere in the foreground although the virtuoso Italian ballerina Mdlle. Limido (noted for her swift pirouettes) took over as ballerina in May. Behind her is Theodora de Gillert in the costume with the red panel. She was a Russian dancer who frequently took travesty roles. Yes, there were Russian dancers performing in London before the C20th. Gillert first danced in London in 1872 at CrystalPalace and after A Trip to the Moon moved to the USA where she appeared as both Aminta in Sylvia and Swanilda in Coppélia. 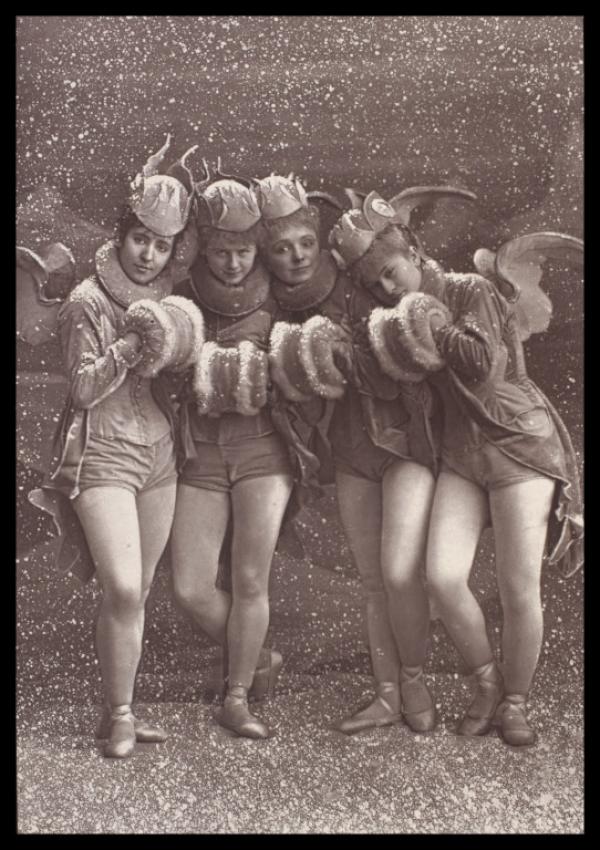 Photograph of the four Swallows from the Guy Little Collection of C19th theatrical photographs held in the Theatre & Performance Collections of the V&A all of which have been digitised.

The Four Swallows were performed by Mdlles. C Gerrish, R Hemmings, Patti, Sismondi. Of these dancers Sismondi (real name Betsy Simmons) is possibly the most interesting. She was first dancing solos in 1868 and was clearly marked for stardom when an accident to her knee curtailed her career. But she never gave up. In a long stage career she traveled widely dancing not only throughout Britain but also in Uruguay, Argentina and South Africa. She became a teacher and was eventually recruited by John Tiller to train his dancers.

Above the stage is Aenea the ‘flying dove’ an innovative aerial dancer who with her husband, the machinist Dando, developed the means to flit around the stage in all directions (rather than just crossing from side to side). It was said she ‘seemed to swim in ether, and she descended feather-like to the uncomplaining ground’. She, too, had an important international career starring in Parisian féerie productions and in her own ballet at the Eden-théâtre.

So the Christmas card portrays an interesting scene in British Theatre history and the music for the ballet is readily available on CDs.The cards may be purchased online go to the V&A shop on this website.

This entry brings the blog for Diaghilev and the Golden Age of the Ballets Russes 1909-1929 to its conclusion. I had hoped to write more about the dismantling of the exhibition...

Caxia-Forum, Barcelona While the galleries are being stripped, Diana and I took off for Barcelona where a significant selection of the V&A’s Diaghilev exhibition will be...

I eat my words!

The Ballets Russes on stage during their first visit to the Fêtes des Narcisses when they danced Les Sylphides and Aurora’s Wedding (which is shown in this...