London’s first Maker Faire was a really inspiring weekend. On Saturday 6 July 2013 , makers gathered at the London College of Communication to show off their creations and on Sunday 7 July here at the V&A, there was a day of panels and discussion exploring political apects of the maker movement, including a keynote by Cory Doctorow.

On Saturday, an inspiring range of great creative people provided many levels of entry into hands-on, hacky, digital creativity. This included creative kids’ codingworkshops using Scratch and Makey Makeys, alongside interesting hardware like Little Printers, Raspberry Pi, active phosporus glow wire and loads of other stalls, each with something useful for anyone getting creative in DIY or community digital. Most obvious here were the many hardware examples. Less visible, but equally as important were some underlying examples of open-source software and platforms like Arduino, Processing and so on. Inspiring. 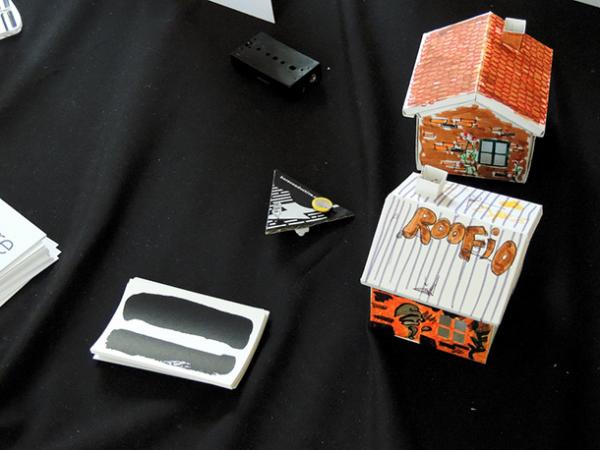 There’s no room here to do justice to the range of interesting things. There were lots of stalls where individuals were showing off the actual creations they had made by hacking things up. Here are some games consoles, awesomely repurposed to make music and imagery. There was also a good range of hands-on workshops. There were also many examples of useful products such as air-curing rubber Sugru and, shown here, Bare Conductive, a pen and paint product with which you can create circuits by just painting or drawing the connections. Overall the day was a great chance to get ideas, see what others were doing and how they approached it, have a chance to do some hands on experience or just buy some kit. Great stuff. 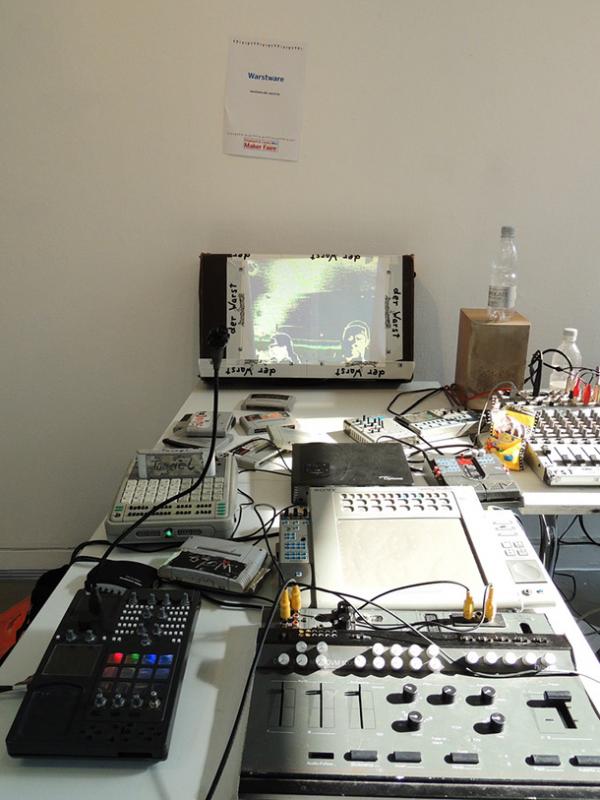 I confess I had some trouble getting to see all the stalls in detail as I was demonstrating the Psychic Fortune Teller. This is a physical interactive which I built for MuseumNext as a bit of hands-on action research into data-driven objects. It is powered by data from consumer web products like Twitter and Google spreadsheets via APIs and feeds. 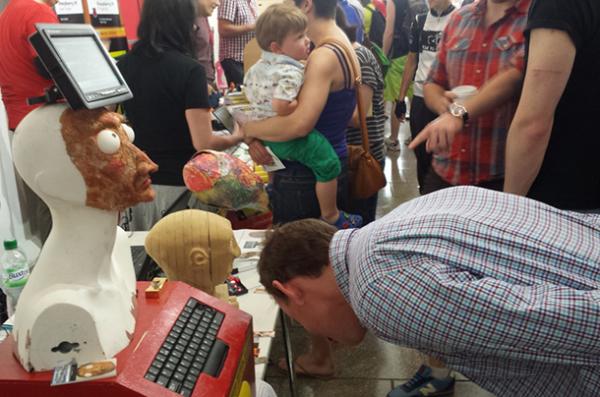 The Psychic Fortune Teller tells fortunes by monitoring Twitter, in this case the event hashtag, using it to gather event-specific content from the real-time discussion. It then makes random connections from this content into fortune readings for bemused attendees. It is really an automaton that reflects physically, what people do online. In order to function however, it also harvests contextual data. This means it can show up new connections from the social media conversations it is monitoring. Here, for example are some of the hashtags, usernames, URLs and other Maker Faire content harvested live over a few hours. (Note – this a screenshot image  the links are not live here)

While Saturday was all about hands-on making, Sunday explored further some of the political issues that the maker movement raises, such as resistance to corporate ownership of intellectual property and deliberately closed capitalist markets. 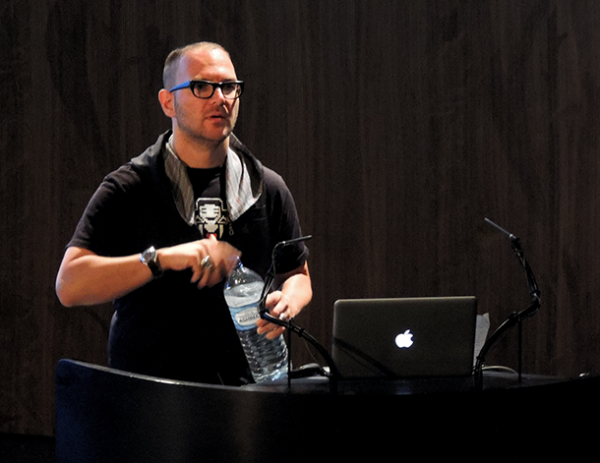 Cory Doctorow kicked off a day of panels and discussions. He started by declaring that every act of making starts by breaking. He also suggested that copying is a built-in skill for humans and should be built upon constructively, not suppressed by inappropriate restrictions. His starting point then, was that the essential nature of creativity is about copying, taking apart and putting back together. However, he then went on to discuss how almost all the legal copyright frameworks round the world are set up to specifically prevent copying and in doing so, impede the free and playfully creative development of ideas.

He continued this theme by exploring how the law makes it illegal to unlock software, and that most software has hidden elements within it specifically to prevent it. He argued how these hidden preventative measures are an illegitimate censorship on people’s right to re-formulate and reuse ideas creatively. He also argued that hidden restrictions within software open everyone to vulnerabilities because they mean we are unable to openly understand how our computers are acting with our data, and therefore know what is safe or not. Apart from the moral implications this raises, Doctorow also pointed out that these hidden secretive actions in your computer are a threat to everyone’s security. Any system can be hacked and once hacked, then all sorts of parties can take advantage.

The day continued with an open debate on the political aspects of the maker movement. There were lots of ideas raised. This example is from London Hackspace. 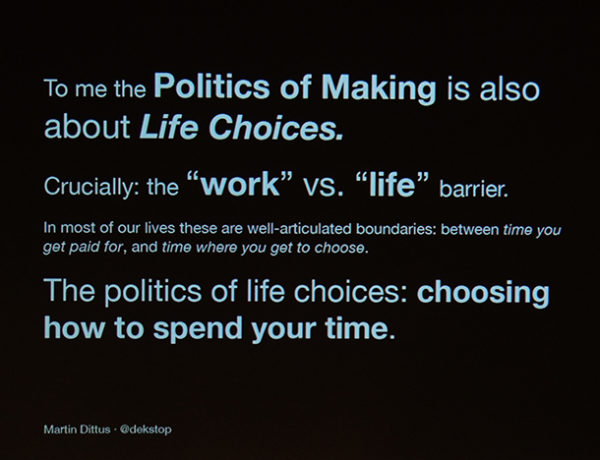 SadIy, I had to leave late morning and could not stay for the rest of this day. It was just getting interesting with a lively debate at the break between Doctorow and a member of the audience who had strong views on control.

A good weekend. Lots of ideas for creative making, some great conversations between all sorts of makers and some quite profound cultural and political issues raised.  I look forward to the next Mini Maker Faire. Full marks to all involved, including my colleagues Digital Programmes Assistant Manager, Irini Papadimitriou and Alex Flowers, Alex Flowers, Team Leader, Digital Programmes, both in Learning here at the V&A.

For more details of the day and video of Cory Doctorow’s keynote see this post by Alex on the V&A Learning blog  and the Elephant & Castle Maker Faire website.