This post refers to a previous iteration of the V&A digital map. You can read about our latest work on the map or go straight to the map to explore.

In September 2013, we launched our Digital Explorer Map. We wanted to provide a better way for our web visitors to find out what the V&A has to offer. This was the first feature on our website we specially builtto work best on a tablet. We did this because tablets are what people use when they are indulging themselves on the web – sofa-friendly, feet-up devices. They are used for pleasure and pleasure is good – we like people to enjoy the V&A. 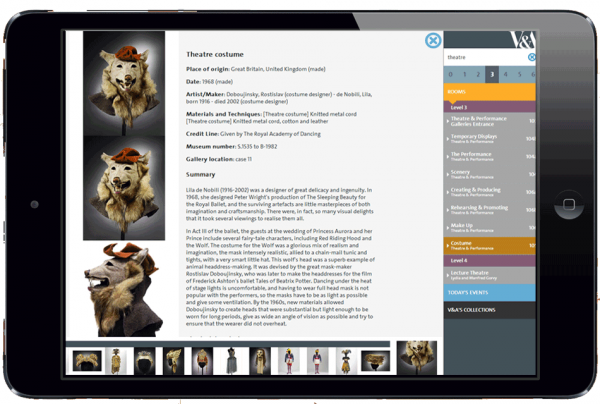 But is it really worth bothering to do this? Does a tablet-friendly way to discover the V&A and its awesome objects actually gets used any more or less than a big fat PDF? Was making it work on phones actually useful? Does everyone ignore all this and use their desktop anyway?

These are tough questions. We knew we’d have to answer them, so we built in some clever behaviour-tracking techy magic which allows us to know (more-or-less) exactly how  people use the map, down to the menu items they select, whether they scroll on the images we offer them or if they actually look at the objects and scroll through the text and images about these objects. Six months after launch, we have a lot of data about how it is being used.

The good news is that, yes it was definitely worth it. People do interact quite differently. They spend more time looking in detail at the objects generally and specifically did so more on a tablet. Phew!

Here are some things we learnt…

This is a big deal. Of all visits to the Explorer Map, 21% are being made from a tablet. This is much higher than any other area of the website. Far fewer visitors who download a PDF map do so on a tablet, which at 13% is the same as the site average. The number of visitors who use the Explorer Map on a tablet is higher than the visit information page, which previously was our most used-content on tablets.

We also made the Explorer Map responsive to display more compactly on the tiny screens of mobiles, because everyone takes their phone everywhere, don’t they? Happily, the mobile use of the Explorer Map is also higher than average at 17%.

Here’s a picture showing the very healthy numbers of users on tablets and mobile compared to other areas of the V&A site  .

The Explorer Map attracts and holds the attention of visitors who are on tablets proportionately more than any other content area on the site do. This is great. More people are using it on their tablets, which is what we wanted.

The Explorer Map is being used much more. In the six months after launch, it was accessed 2.7 times more than the PDF had been in the six months prior to launch (51,667 compared to 13,755). After launch the difference is even bigger. When there was a choice of both, the Explorer Map was used 9.2 times more than the PDF. Obviously there is some distortion of these figures due to promotion at launch, but use of the Explorer remains much higher.

*Data collected in the period from six months prior to launch until six months after launch of the Digital Explorer Map (18 March 2013 to 17 March 2014).

Browse is the default behaviour

The most striking thing on all devices is that search is barely used. Only 1% of people search when using the Explorer Map on tablet and desktop. This is slightly higher on mobile, probably there is usually no sidebar menu. Even on mobile though, search is only used 5% of the time.

The amount of browsing by images (map and objects) compared to browsing by text (menus) is about the same on both tablets and desktop at about 50% each, but the way it is browsed is very different. There is a lot more dragging and zooming on tablets than there is on desktops, where there is more simple clicking on rooms than panning about to explore. There is even more on mobile.

On tablets, people look at objects in detail more than on desktop or mobile

When people use the map on a tablet, about 20% of their activity is looking at objects. 14% is scrolling and selecting images to view more closely. A further healthy 6% is spent looking in detail at the objects by accessing the full data record, panning through text and images. This is very encouraging.

On tablet, 45% of all interactions are some sort of dragging or scrolling action on images or menus, compared to 55% simple touch/click selection.

On tablets people use gestures to explore and objects are looked at in more detail. 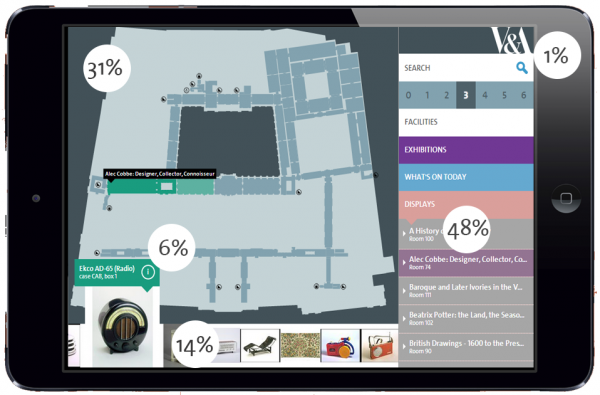 On desktop, zooming and scrolling is used less (a lot less!)

When people access the Explorer from a desktop, they still choose to look at rooms and objects, but look at objects slightly less often. They use the menus in about the same proportions as on tablet and also like tablet, hardly use search at all. However on desktop, the simple numbers mask a huge difference in what is actually happening.

On desktop, just 8% of all interactions are some sort of dragging or scrolling action on images or menus, compared to 92% simple touch/click selection. The way the content is being accessed is very different.

Behaviour on desktop is simply not the same as it is on tablet. Interaction is largely limited to point and choose actions. Objects still attract significant interest, but slightly less so than on tablets. 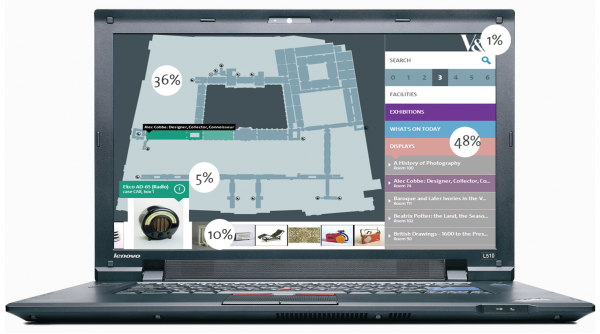 On mobile, zooming and scrolling is used much more

The mobile display is different to the desktop and tablet. It is intended for portait use and when viewed that way does not show a menu to make space. The behaviour shows much highre use of dragging, scrolling and zooming and search makes up 5% of interactions. This is not really that surprising looking at the screen layout. In fact the fact that 32% of interactions are still using the menus only visible in landscape was quite surprising. The numbers with two lines are the total for that type of use for both displays combined.

On mobile, dragging or scrolling type actions make up 59% compared to 41% simple touch/click selection. This is not all that surprising, but again it is very different to desktop

Behaviour on mobile is even more different than tablet from desktop. It is much more touchy and there is less detailed looking at objects. Search is used more, although it is still a small proportion of interactions. 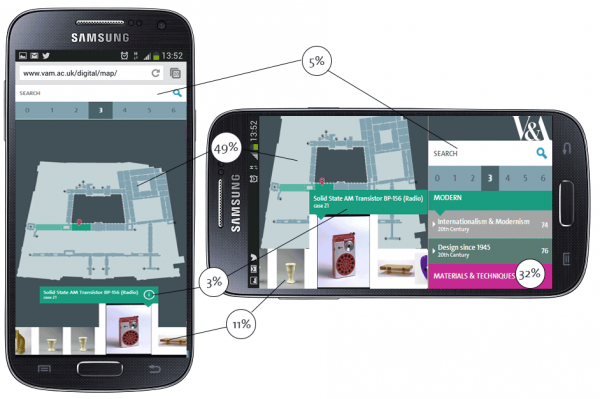 So, why bother designing for tablet users?

We made the Digital Explorer because using a tablet is just obviously what lots of people prefer to do a lot of the time and especially for indulging themselves during their quality time. The V&A is about connecting people with art and design and the best way to do that is to make it a pleasure.

Even back in August 2013,Ofcom’s Communications Market Report reported 24% of UK households owning a tablet and that was based on data from some months before. It is probably closer to 50% now, post-Christmas.

The ehaviour data shows that when you provide a service aimed at the devices they own and love, they use it more and engage more. This is why we bother.

Want to know what your audiences are doing too? Here’s some free stuff

We are able to see what people do on our site using data cleverly extracted by tracking code we design and build into it. If you want to do this, we have a post for that!  Here, you can read how it works. There should be enough information to get you started.

How to use Google Analytics to track user behaviour

Have you considered adding a history view to the map? As objects on display rotate and change, the inventory of each room on the map changes (right?). Have you considered adding a “See what was in this room one year ago” feature? I think having something like that would really communicate to users/visitors that a museum is not a totally static environment. There’s always something interesting around the corner that you might not have seen last time you were here.

It also presents opportunities to talk about conservation, acquisition, deaccessioning and a lot of the other traditionally opaque aspects of our field. I can imagine something like this becoming a sort of gateway or hub for all kinds of information that would increase the overall transparency of the museum and its operations.

Also, any plans to open source any of this stuff? I know a lot of museums, mine included, who would love to try something similar?

Hi. This is an interesting idea. You’re right about it not being a static place. The V&A has a continuous cycle of ongoing improvement, called FuturePlan. This means that galleries change and may be closed for refurbishment and sometimes completely new spaces emerge, such as the day-lit gallery in the magnificent Medieval & Renaissance Galleries.

This is not something we can currently display, but it would be interesting to us to see if perhaps at some point in the future we could. Thanks for the suggestion.