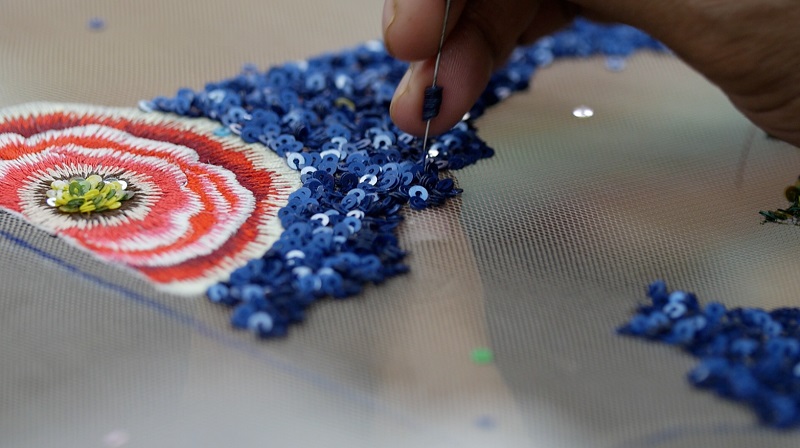 Sarah Strickland is a producer with CultureShock Media, and is working with The Fabric of India team to create the exhibition’s audiovisual content. She recently returned from filming in India, following Rosie Wanek’s research as our Location Scout (check out her previous posts to learn more about how we found these locations).

For The Fabric of India exhibition, the V&A commissioned a small film crew (myself and Peter Kelleher) to document several processes that focus on the handmade production of textiles. After a thorough briefing from the exhibition team, we set off to film on location in India, starting in New Delhi.

Upon arrival at Manish Arora’s design studio and workshop in Noida, New Delhi, I was instantly struck by the swirl of colour, pattern and texture that surrounded us. Beads and sequins popped with colour as we filmed them being meticulously sewn by Arora’s skilled craftsmen, and vibrant patterned materials glistened with embellishments as we explored the archive. After capturing many of the creative processes in detail and filming an interview with the charismatic Arora, it was time to leave New Delhi and travel to the next city.

We took an evening train from New Delhi to Jaipur, our blue carriage traveling along the tracks as the sun set. Looking out the window, rows of multicoloured houses lined the way with children playing outside and families sitting together, talking and cooking. Five and a half hours later we arrived in Jaipur, our home for the next six days.

The cityscape of Jaipur instantly confronted us with a pallet of pastel pinks and yellows, and it was easy to see why Jaipur is known as the Pink City. The roads were kaleidoscopes of colour as ladies dressed in limitless patterns rode mopeds sidesaddle with ease and grace, and neon painted elephants plodded along the streets. Camels towed carts laden with heaps of multicoloured cloth, flower-adorned silver horse carriages made their way through the traffic, and auto-rickshaws painted in yellow and green beeped their horns as they sped through the streets as vendors called out their wares.

From Jaipur we drove out to our second filming location, a quiet nearby village called Kaladera. Here we captured the process of indigo dyeing in the grounds of a family’s home. The striking contrast of the deep purple indigo vat in the landscape was quite breathtaking.

We filmed each stage of the process multiple times to allow for different camera angles, film speeds and lenses – though we only had one chance to capture the cloth going into the dye so we had to make sure we got that angle right the first time!

The following day we returned to the same village to film khadi weavers. There we saw how a piece of cloth is created from a hank of cotton. The clatter of the workshop’s looms in action offered constant background as we followed the journey of the yarn. We learned how some of the yarn is starched (for the warp) and some is not (for the weft) before it is woven. Filming in slow-motion was vital here in order to capture the shuttle passing through the warp threads and the details of the loom in operation.

Our fourth filming location was at the workshop of printing block makers in Sanganer, where we filmed the creation of a V&A-commissioned block. Pattern took the spotlight as each craftsman worked on different intricate designs in the open workshop next to a busy road. The process of creating the V&A block from start to finish took several days, and the intense carving was fascinating to watch and capture – as was the level of concentration required from the makers.

Embroidery was the final process we were to capture in Jaipur. At an embroidery workshop in the Old Town, the men worked using a variety of techniques on fabrics stretched across wooden frames, while women also embroidered by hand as well as creating accessories to be used with the designs. We focused on filming a specific kind of hand embroidery called ari. In order to capture the creation of the stitches in a clear way we filmed some shots in slow motion, as the usual speed at which the embroiderers stitch is very fast. We often used a macro lens as the tools and gold thread were very fine, and this enabled us to get very close to the action. However a steady hand was required to make sure the shot was in focus, as a using a macro lens means the depth of field can be shallow.

Seeing first hand the skill and dedication that goes into creating handmade textiles and objects was astounding, and we are really excited about being able to capture it all for The Fabric of India’s visitors. We are now in the process of editing the films both for the exhibition and online, and each set of films will offer the viewer something different. We hope you will enjoy watching them.

Sarah, Peter, and CultureShock are preparing a range of AV material for the exhibition, as well as longer and more detailed versions of these processes for the V&A’s website. We look forward to sharing them with you!

what lovely reading – thank you