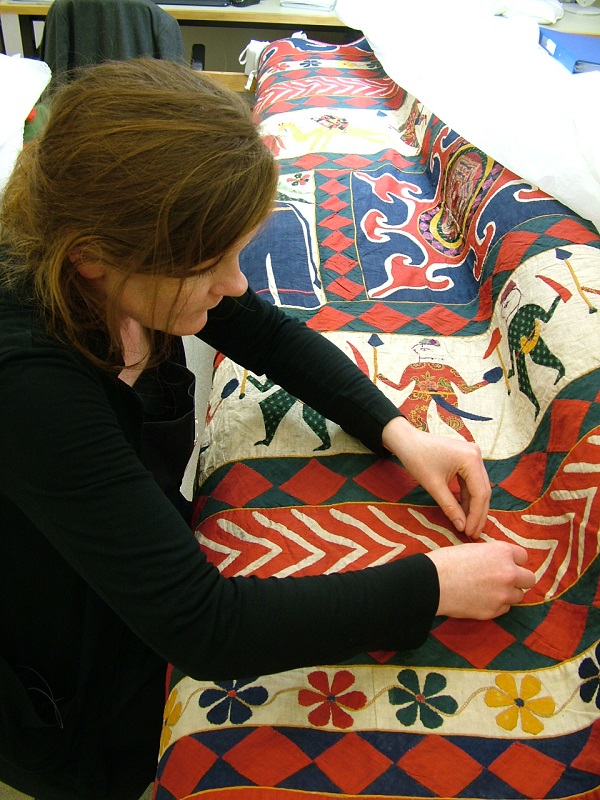 Roisin Morris is a V&A Senior Textile Conservator, and is currently working on the massive room hanging we featured in  A Room with a View (Part 1) two weeks back. This week she fills us in on some of the finer points of preparing (and repairing!) an object like this for display.

As you will have read, this wall covering was found on the street in New York and so we know very little about the specifics of who used it and where.

It originates from Gujarat in northwestern India. This type of object was used for festive occasions, such as weddings. This example measures sixteen and half meters and is likely to have been made to hang in a room with three windows because it has three window openings. It also has a lintel decoration which would hang over the door.

It is constructed of two layers – a reverse or lining and a pieced upper layer or face. The characters and symbols that decorate this jolly textile are appliquéd on to the face.

As you can imagine, due to the scale of the object it has required many hours of planning and conservation and so far has been a bit of a relay treatment with many people involved.

Preparation for the conservation work began, as so many projects do, with sample dyeing support fabrics to match the areas of loss found throughout the textile.

We dye our own support fabrics to ensure better light fastness as well as wash fastness.  A spectrum of colours in cotton and silk for infilling holes, and nylon net for overlays were dyed.

We work on the object while it is rolled so that it is manageable and doesn’t take up too much space. Below, Textile Conservator Zoe Lanceley is seen working on the lintel decoration.

The condition of the textile varies; for instance, there is a lot of structural damage to this soldier character wherever he appears. In most cases the textile has degraded along the black outline in the print. It is possible that this is the result of the iron mordant deteriorating in the printing ink. Dyed lightweight cotton is used to infill the areas of loss, as can be seen in the before and after below.

Above, a typical tear seen under this bull motif is repaired.

Roundels appear mostly at the centre of the windows. They are all slightly different in pattern and arrangement. The three images below show this example before, during and after conservation. The holes were in-filled using dyed textile, in this case silk, and for extra support dyed nylon net was stitched over individually damaged panels.

Work on the room set continues!

What a fantastic piece. I love Indian appliqué textiles. Can’t wait to see the exhibition.

Wow so beautiful piece of textile.Many thanks to all the conservators who preserve the fabrics for people like me to enjoy,admire & love.Thank you