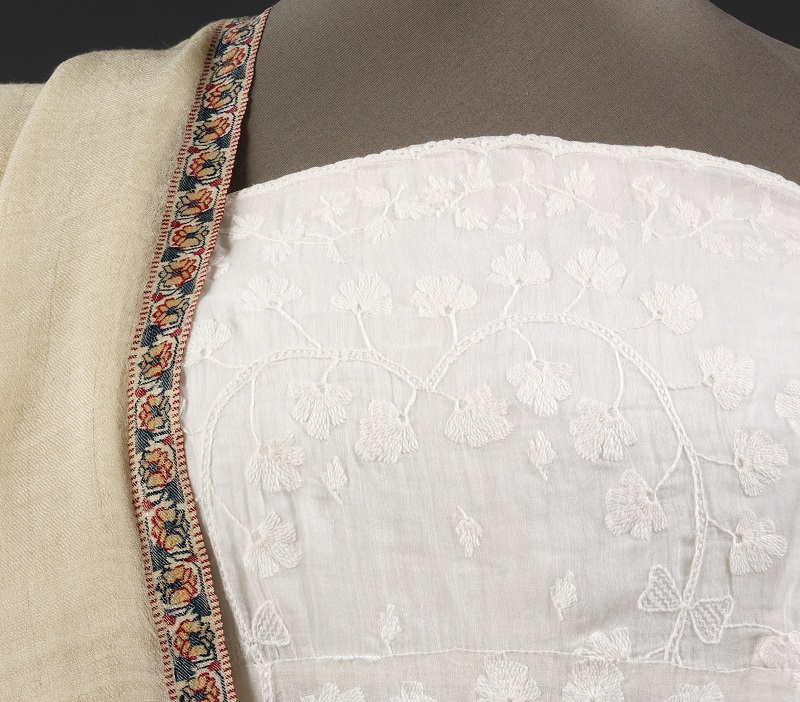 Jenny Lister is curator of 19th century fashion and textiles at the V&A. Last year, during initial object selections for The Fabric of India, she helped the team choose a muslin dress from the  V&A’s Textiles and Fashion collection. Today, she very kindly relives that selection process for our blog.

As the curator responsible for the nineteenth century fashion and textile collections at the V&A, my days are rarely the same. Between the usual meetings, emails and visitor appointments at the Museum, I also work in the stores at the Clothworkers’ Centre. Typically I might be there preparing for a teaching session, meeting curators from other museums researching objects for an exhibition, or cataloguing new acquisitions.

One morning last summer I met with Rosemary and Avalon, and Jo, Elizabeth-Ann, and Keira of the Indian Textiles conservation team at the Clothworkers’ Centre. We needed to identify a potential exhibition object – an early 1800s muslin dress – to display in the forthcoming The Fabric of India as an example of Bengali muslin use in Europe. Anyone who has watched a TV or film version of Pride and Prejudice will be able to picture the kind of thing we had in mind. Ideally suited for tall, slender women, the high-waisted ‘Empire Line’ style dominated fashion for at least three decades, from the 1790s to the 1820s. This fashion was totally dependent on a supply of fine, translucent cotton muslin – at first imported from India, then later, less exclusive imitations often woven and printed or embroidered in Britain.

The Museum is fortunate to have a good collection of embroidered white muslin dresses, about thirty of them, dating from about 1800 to 1820. Several were acquired by curators very early in the history of collecting fashion, about 100 years ago. They have often been needed to represent their moment in fashion over the years, and some are weak and over-displayed. Some were altered drastically before they came to the Museum, and others were made for extremely small women and would look disproportionate on display (my theory is that larger examples were re-used and altered over the years, while smaller examples were less adaptable and so more have survived). After putting aside those dresses that are suitable for research but not for display, as well as those that have already been on show in recent years, we were left with two main options.

But our other option proved even better for our needs. The dress below, CIRC.30-1958, has apparently never been displayed since its acquisition in 1958. We certainly didn’t have a photograph of it mounted on a mannequin, so it was about time it had a bit of attention.

All the dress needed to get it ready for photography and display was a wet clean (a special conservation wash), a custom-made mannequin, conservation grade petticoats and Keira Miller’s careful mounting. Its photograph below shows it paired with the other wardrobe essential of the early 1800s: the Kashmir shawl. Other Kashmir shawl examples in the V&A’s collection tend towards deep dark shades of red or yellow, and I’m really pleased to see how the more subtle combination of the rich cream cashmere works with the clean white muslin of the dress – setting off the brightly-coloured floral ‘buta’ motifs of the shawl’s borders. It’s easy to see why British weavers needed to copy Indian textiles to answer increasing demand for these essential and highly desirable accessories. The empire look hadn’t happened overnight, but it must have felt strangely exposing to wear a muslin dress on its own, even with undergarments (another subject entirely). A shawl would have supplied not only warmth and aesthetic drapery, but also a protective wrap to help when feeling over-exposed.

It’s relatively easy to tell difference between Indian and British shawls, as they are woven in completely different ways. The very finest muslin is nearly always going to be handwoven in India because British manufacturers always made it on industrial looms in larger, less delicate lengths. However, it’s not quite so straightforward working out where a white muslin dress might have been embroidered. We are still debating whether our dress was embroidered in India or Britain. The embroidery is attractive but isn’t of the high quality normally associated with Indian work.

Neither is it similar to the whitework embroidery done in Glasgow and West Scotland which came to be known as Broderie Anglaise. Another example where it is not possible to tell where the embroidery was done is an 1823-5 dress that will be on show in the new Fashion Gallery displays later this autumn (T.10-1936, detail below). This dress has elements of both Indian and Scottish embroidery techniques, showing the close relationships in design and trade between the two nations.

Going back to Jane Austen, there’s an interesting conversation in Northanger Abbey (towards the end of Chapter 3) when the ‘very agreeable’ Henry Tilney impresses the heroine Catherine Morland with his detailed understanding of muslin and its subtle differentiations. He boasts of finding a ‘true Indian muslin’ for his sister at 5 shillings a yard, a ‘prodigious bargain’. He also mentions his prowess at buying his own muslin cravats, a reminder that muslin was also an essential component of male dress.

This is a pocket book cover I found in an antiques fair ages ago. It shows the fashion for antiquity and muslin dresses in its pure form, but in an image produced for wide circulation – at least amongst literate, well-to-do women. The idealized woman shows a lot of leg through and beneath her tunic style dress, while her partner’s closely tailored coat and long breeches reveals a similarly statuesque physique was required for men as well.

The muslin dress in the exhibition represents one of the most important contributions made by Indian textiles to Western fashion. Muslin, in all its subtle variations, with woven or embroidered whitework patterns, made the classical, minimalist look possible (at least for a while) before the more garishly coloured and embellished dresses of the 1820s and 1830s dominated fashionable dress. Even after day-to-day fashion had moved on, clean white muslin remained a popular choice for wedding dresses later in the century. It’s an example of the way in which the amazing textiles from India influenced not only the development of fashion, but fueled the industrial revolution – stimulating the production in Britain of attractive, more affordable textiles on a large scale for customers in the expanding middle classes who wanted that India-influenced look.

I’m curious about the unusual neckline on this gown. Do you know why it’s so high? I’ve never seen another gown from this period with a neckline of this shape, it would be great to know more about it.

Embroidered are the designed outfits which are known for its good quality. There are also a number of regular shops for embroidery outfits and an online store which name is IMAIMA, it is also even better. You can even purchase many different type of accessories of embroidery at this marketplace.