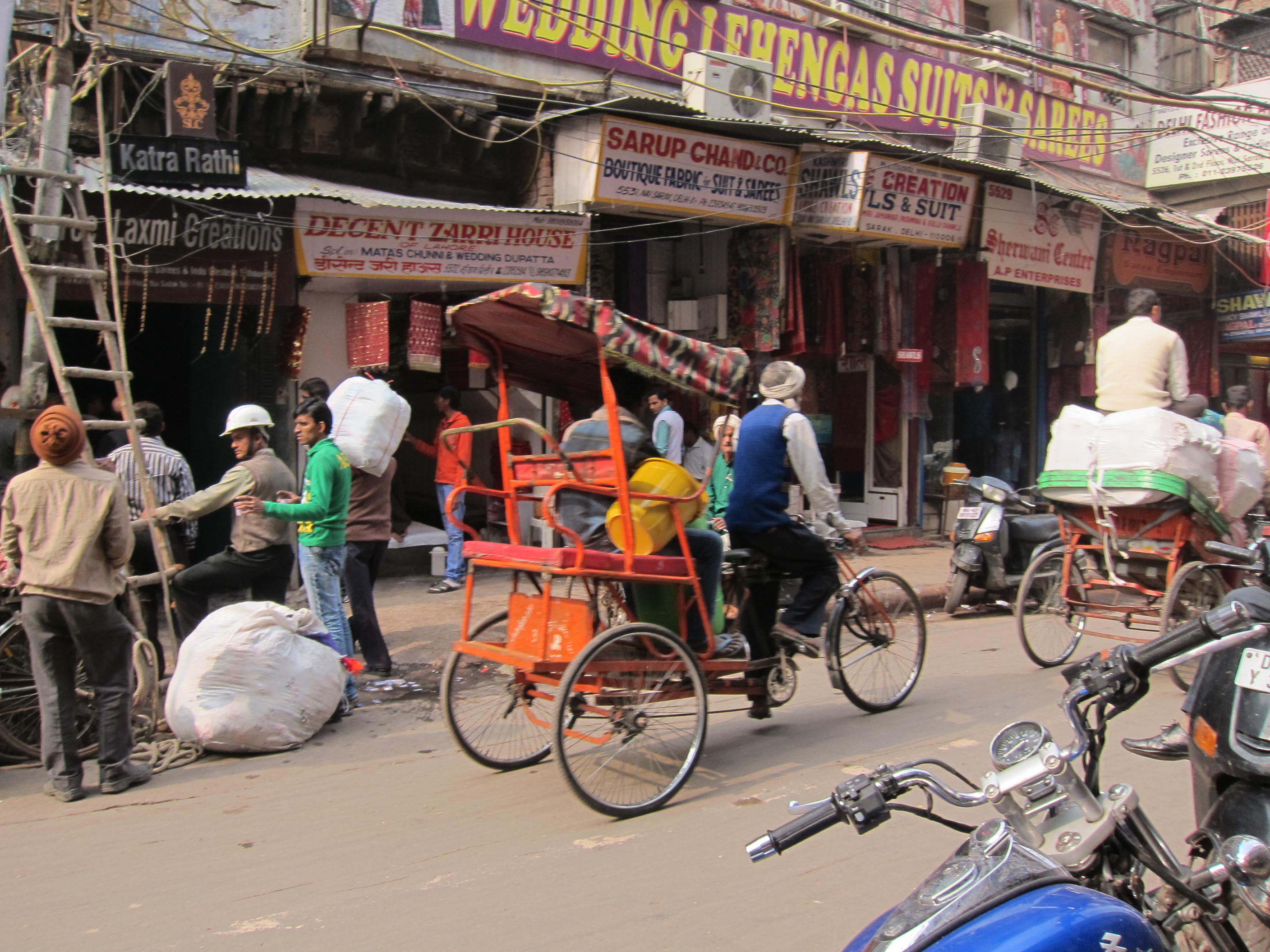 In a previous blog we visited a designer wedding show to take a glimpse at the luxury end of the wedding market. This week we have a very different perspective from our guest blogger Sucharita Beniwal.

It has to be done today, the whole family including mother, father, aunts, sister with her children, and of course the uncle, have all come together to finalize the deal. In the dark narrow lanes, where men call out from every corner and wares hang low in cramped stalls, the uncle, who knows this area better than anyone else, directs the family to a particular shop. The eyes of the women wander across the street, but they take off their shoes and step inside the narrow shop, and sit cross-legged on the white sheet-covered floor.

The salesman throws out a few pieces trying to gauge the family’s mood and what exactly they are looking for and the prices they might settle on. He shows them one that is doing the latest round, with some shimmer and stone, and asks the women to describe what they would like. The men seem to take interest; after all it is they who will pay. They try to direct the women to focus on traditional looks and colours – pinks and reds – while insisting that the salesperson keeps to their budget. The women have some notions of what they would like to see, guided by the latest popular television series and the most recent Bollywood movie with a wedding scene. The salesman insists on the uniqueness of the piece he is showing them, and claims that it is exactly the kind of piece featured in so-and-so movie. When the women nod in appreciation, the salesman elaborates on the exquisiteness of the handwork and the embellishments. The women and the men reach an agreement on two of the pieces. Finally, after much bargaining, a consensus on price is reached and the deal is stuck! The wedding lehnga for the bride-to-be has been chosen by the whole family.

In another part of the market, a middle-class bride is having her final fitting for her customized lehnga. She made her choice after hours of scanning the web and came armed with printed images and downloads on her phone. She took the advice of friends, mother, aunts and the wisdom of previous brides on which shops to visit, prices of particular styles and how to get the best bargains – but the choice is hers. She knows her Tarun Tahiliani from Sabyasachi, her peach from her orange. She knows her piece is a great look-alike of the designer outfit she dreamt of wearing, and better still, she can ask for customization, more sequins here or a different border there. After all, in the pretty wedding photographs, no one can tell the imitation from the actual.

These shops stock large quantities of outfits that mimic the aesthetic of popular designers such as Ritu Kumar or Sabyasachi Mukherjee. The shopkeepers look through bridal magazines or watch fashion shows and create their own versions. In the same way, big-name designers scope the streets and bazaars of Kinari Market (Delhi) as well as the collections of princely estates to find their inspiration. There is a constant flow of ideas and aesthetics and adaptation and copying that goes back and forth between the market and designer. In the end it is difficult to say who is copying who. The outfits are made in factories dotted around Kolkata in the East, Surat in the West and Bareilly in the North. It maybe zircon stone beads for the rich and plastic beads for the poor, but in the hundreds of shops in the narrow lanes of Old Delhi’s Chandini Chowk, amongst the smells and the noise, the hustle and bustle, there is a bridal lehnga to suit every taste and every pocket.

Sucharita is a student from the Ambedkar University, Delhi. This post is based on her thesis, ‘The Wedding Lehnga: Aesthetics of Form and Experience’, which offers a survey of the popularization of the wedding aesthetic