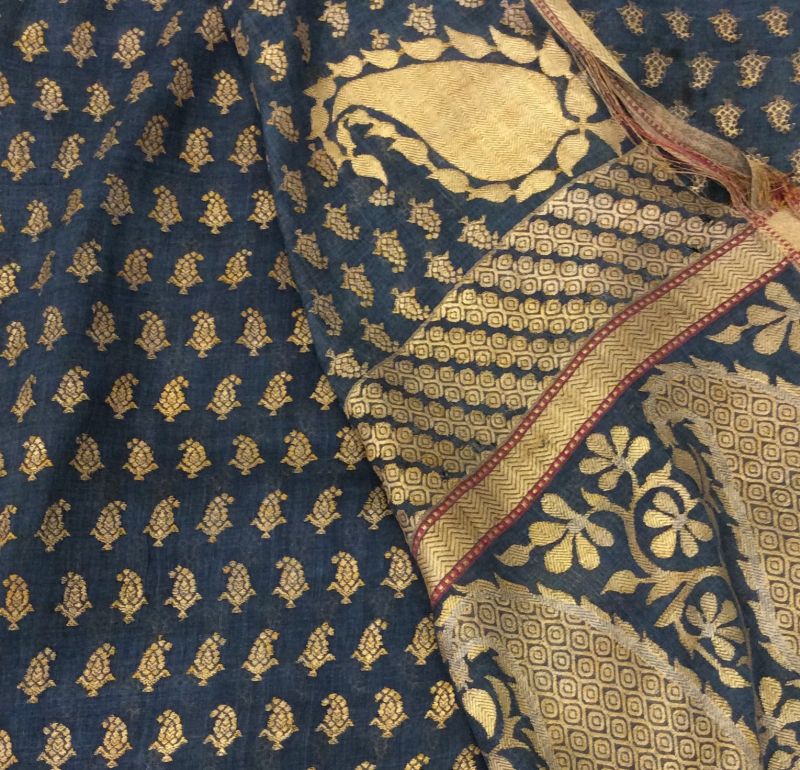 Welcome to our blog on the V&A’s forthcoming exhibition The Fabric of India. It’s now a year away, but preparations are well underway for what promises to be not only a beautiful and dramatic show but also a major landmark in the study and display of the subject. Focussing on hand-made textiles, the exhibition will include over 200 objects, with over two-thirds coming from the V&A’s own collection, and the rest made up of loans of key objects from public and private collections in India, America, Europe and the UK. It is curated by Rosemary Crill and Divia Patel, both of the V&A’s Asian Department.

While many people are familiar with some aspects of South Asian textiles – Mughal velvets, western-market chintzes or rural embroideries, for example – we are aiming to surprise, inspire, delight and inform visitors with an extraordinary range of material, much of which we hope will be new to all our different audiences. As well as displaying some great historical masterpieces, we are also emphasising the importance and variety of the basic fibres – silk, cotton, wool – from which Indian textiles are traditionally made, and illustrating the remarkable techniques of weaving, printing, dyeing and embroidery that have made them prized across the world right up to the present day.

Indian textiles are not just visually beautiful – they have been a major force in both economics and politics, whether through trade under the domination of the British East India Company or when acting as the catalyst for the Independence movement. The story of khadi (hand-spun and hand-woven cotton) and the revival of textile skills that emerged after India’s Independence form key parts of the exhibition, with the continuity of these skills very much on display in the cutting-edge contemporary pieces with which we close.

The dates of the pieces in the exhibition range from the third century AD to the present day. Many haven’t been on display for over 100 years, if ever, and they include some stunning large objects like a huge flag from a shrine in Bahreich, an entire applique room-hanging from Gujarat and an immense 17th-century chintz floor-spread. Major loans include the stunning tent of Tipu Sultan from Powis Castle, and a complete set of early chintz bed-hangings that belonged to Prince Eugene of Savoie, from the MAK in Vienna.

Exhibitions of this size and scope require team-work, from the logistics of loans to the conservation and mounting of fragile pieces, not to mention the selection of the objects themselves. All of these aspects of the exhibition will be the subject of our blogs over the coming months. In our next post, Divia will be giving more detail about the amazing contemporary pieces that will form the dramatic finale of the show.

9 comments so far, view or add yours

Mam, I have great interest in Indian Heritage Textiles. It is wonderful of you to showcase such rich heritage to the world. I would love to see the pieces you are going to display. How can i get to see it. Will be very obliged if i can see a few of them at least. Thank you.

This sounds like such an intriguing and well conceived exhibition. I look forward to hearing more and to experiencing it next year. It will hopefully challenge some traditional and narrow minded views of Indian material culture.

Hello Jyothi, thank you for your comment! If you can’t come to see the exhibition in person, you can still see plenty of images of the pieces we will be showing, either on the blog, on the exhibition page on our website, or in the accompanying book, which will be out next September.

Russell, thank you for your positive comment – we will certainly try to give a new slant to the subject which we hope you will enjoy.

I live in Bangalore and have enjoyed my visits to VAM and have been delighted by VAM’s images of its collections over times. The textile exhibition is a beautiful concept and I wish you all the success. Good work!!

Hi Rosemary–
Will there be a symposium???

Wonderful! nice it would be to publish texts with discussion.