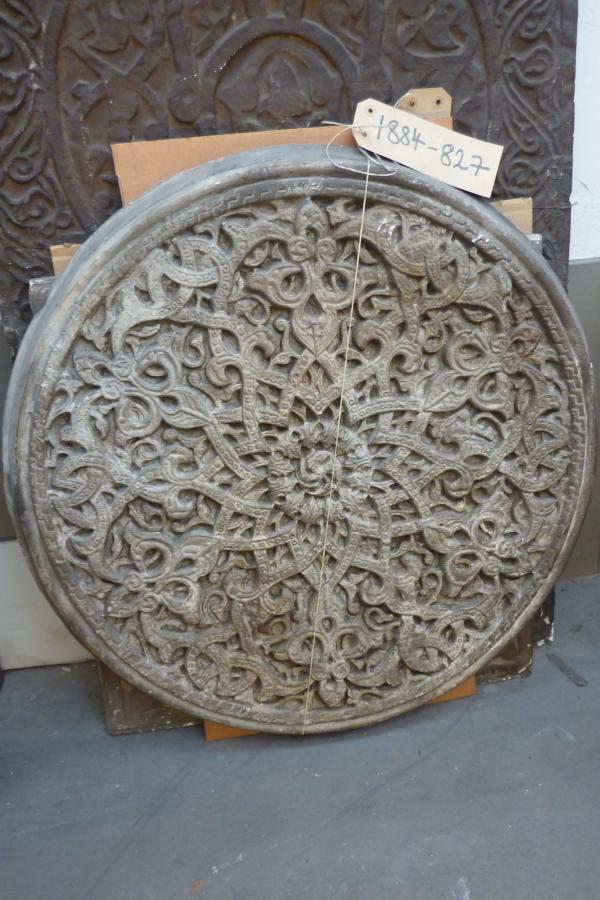 Among the two-dimensional casts that will eventually be displayed in Gallery 46 – the corridor that runs between the two Cast Courts – is an interesting selection of architectural decoration from two major Islamic centres: the Alhambra in Granada, the palace built by the Nasrid rulers of Islamic Spain in the 14th century; and Cairo in Egypt, capital of the Mamluk sultanate from 1250 to 1517.

These casts were bought in bulk within a year of each other: the Alhambra panels came to South Kensingtonin 1883 through the Academia de la Historia in Madrid, and were originally displayed under the arches of the Portico de la Gloria. The Cairo casts came in two batches in 1884: one set was commissioned from Stanley Lane-Poole (1854-1931), a renowned Arabist employed by the South Kensington Museum as expert advisor on Egyptian art; the other was bought from Gaston de Saint Maurice (1831-1905), a French aristocrat who lived in Cairo for about 20 years, working as equerry to the Khedive (Ottoman governor) of Egypt.

It is not certain whether these Cairo panels have ever been on display in the Museum, but according to an article on ‘Saracenic art’ (as Arab art was often called in the 19th century), published in The Times on 23 October 1883, these casts were acquired “with a view to the introduction of Saracenic designs into the training of art students”. Islamic ornament was actively promoted by the South Kensington Museum’s founders as an excellent source of inspiration for students of contemporary design, so it is highly relevant to the Museum’s history and the history of the Cast Courts themselves to put these Islamic panels back on display. 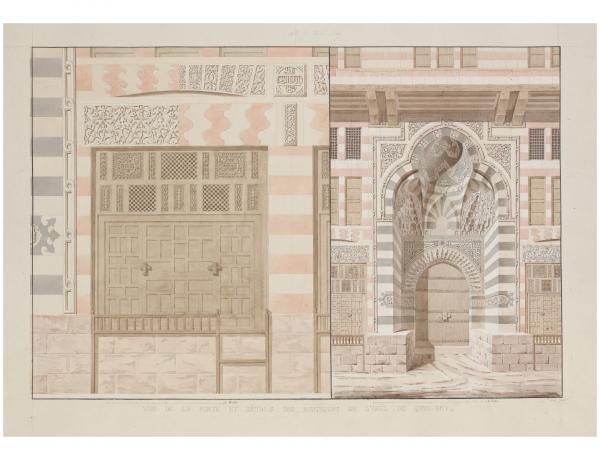 The Cairo panels mostly come from two main buildings: the Madrasa of Sultan Hasan (built 1356-63), and the Wikala (or caravanserai) of Sultan Qa’itbay (1477). In the 19th century, these monuments were viewed as the masterpieces of Mamluk architecture in Cairo: Stanley Lane-Poole described the Wikala as a “text-book of Saracenic decoration”. The above page from Pascal Coste’s album of study drawings for his Architecture Arabe ou Monuments du Caire, 1818-22, shows the façade of the Wikala of Sultan Qa’itbay – our cast collection includes a number of individual elements seen in this detailed drawing. Casts of these architectural treasures were also made by French architects working in Cairo at this period, and incorporated as elements of interior design into the houses they built. The casts from the Saint Maurice collection, for example, once decorated several rooms of his grand villa.

In the last week we have been looking closely at one of the panels from the Saint Maurice collection – a panel of geometric interlace, said to have come from the Mosque which Sultan Qa’itbay built between 1481 and 1490.

This panel is the first of the Islamic group to undergo conservation treatment. A colleague at the Louvre has been in touch, since they have just completed the restoration and reconstruction of an enormous Mamluk porch, contemporary in date with the buildings our casts come from, and also brought to Parisin the 1880s. This amazing object – from the collections of the Musée des Arts Décoratifs, but never displayed – will be unveiled in May this year when the Louvre opens its newly refurbished Islamic galleries. They want to include a photograph of our Cairo cast in their publication of this project – the first time one of our Cairo casts has been published! So we want it to look its best.

Conservator Sergio Merida spent a day cleaning the panel – after more than a century exposed to the pollution of central London, it was very dirty (as are most of the plaster casts). A detail showing the panel part-way through the cleaning process clearly shows the differences in condition before and after:

The cleaning process has revealed an interesting patina on the surface of the cast, presumably painted to make it look more like the stone original. A pinker tone of paint highlights the hollows in the original carving. A note in the St Maurice file in the V&A Archives confirms that his casts “artistically reproduced” the coloured decoration of the originals.

But this treatment has also shown how fragile the plaster material is, and we will have to think carefully about this when we discuss how to mount these panels on the wall. Because these casts were made in Cairo, the plaster material they are made from is different from the plaster of Paris used to make casts in Europe. It is very pink in colour, rather than the bright refined white of plaster of Paris, and very crumbly. It makes the panel worryingly flexible. The craftsmen in Cairo were obviously using the materials they had available locally, and if this was made as an element of interior decoration, it perhaps was not meant to last as long as it has.

We will be thinking next about doing some analyses of this plaster body, to try to understand more about the differences between the material we are used to working with, and that available in 19th-century Cairo. Hopefully, this will also help us understand how to stabilise the hairline cracks that have developed all over the panel.

But as with any new gallery project, putting these panels out on display in the refurbished Cast Courts has given us the chance to look afresh at a neglected part of the V&A’s collections, and in doing so, to learn more about the past.