If there’s one thing that working at the V&A has taught me, it’s that established systems can prove to be robust and to have great constancy. Having conceded that fact, my pattern and formula for this week’s festive post might in part seem a little familiar. 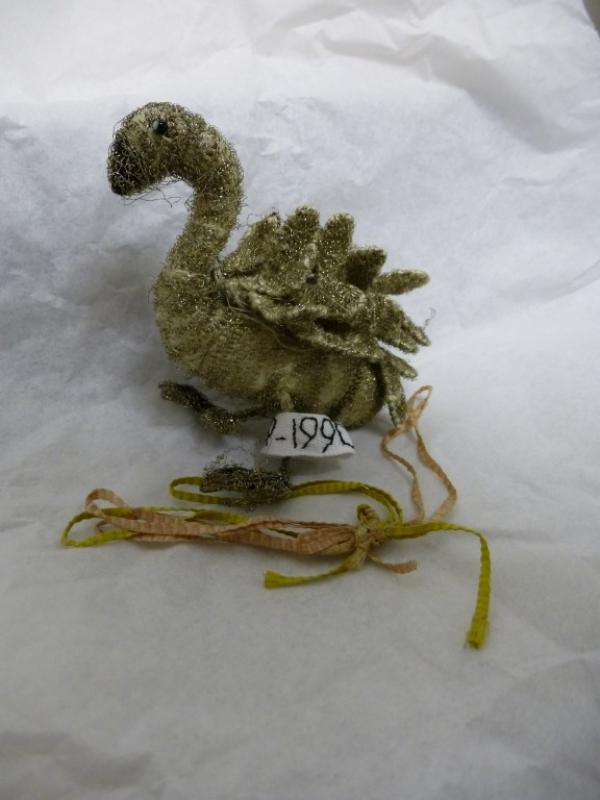 How many swans have you seen swimming this winter? If you can force yourselves outside, just walk up to Hyde Park and go and have a look on the Serpentine, and you might see one or two sad, chilly individuals floating about. I shall be staying warm, however, and looking solely at this little fellow, who is both a swan and a toy. What could be more festive? Seven of them, you say? I can go one better: the industrious Martha Edlin, of the 17th century, filled an embroidered casket with a variety of lovely things, such as tiny gloves, tiny pots and tiny pin cushions; a plethora of diddy parts which far out-Christmases seven big white floaty birds. 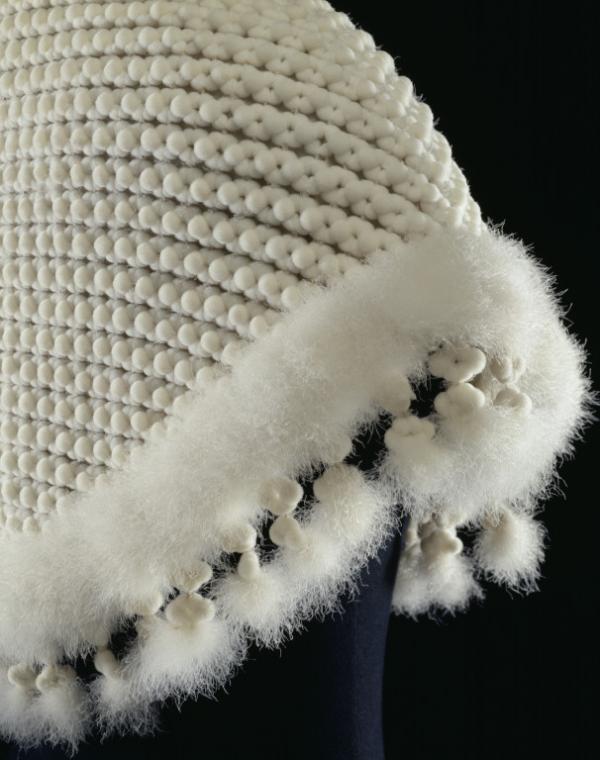 Sticking stubbornly to my established theme (and, afterall, are not swans the most festive of birds (as well as being roughly the same size as a turkey (or goose))) we have in the collection this rather beautiful, very fine, 19th Century Russian mantle made of swansdown (i.e. baby swan coating) and cream silk. It has the advantage of being almost weightless, and a good deal more fetching than those bags they used to carry injured swans in on Animal Hospital (loose association). Unlike real swans, who as far as I can remember go around breaking children’s arms with a batsof their wings, the mantle is almost weightless, contributing to its somewhat ethereal loveliness. 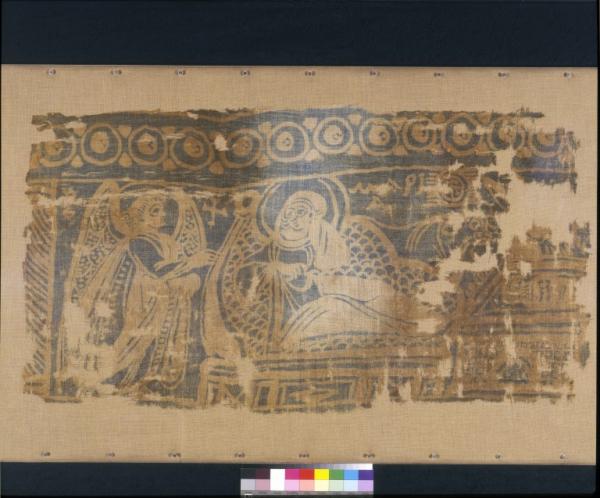 As it’s more than a week into December, now seems a good time to mention the begetter of Christmas. No, of course I don’t mean John Lewis or The Pogues. The person, or deity, of whom I speak, is of course Jesus Christ. Here the Baby Jesus is barely visible in the damaged right-hand side of the panel, though that can be forgiven when one considers that this Egyptian printed linen could be up to 1700 years old. 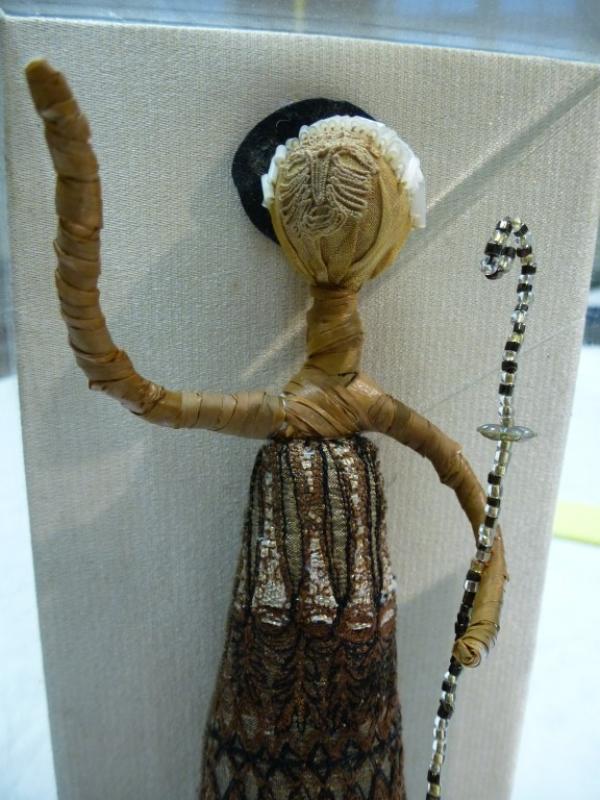 About 1700 years after Egyptian craftsmen printed the Virgin Mary onto a piece of linen, Susan Riley of Maidstone took some canvas, kapok, sequins and created a charming Nativity group for the Needlework Development Scheme, a kind of collaborative enterprise between institutions for art and design and industry. What could be more festive than joining hands in the name of creating something nice? (Especially if that thing is shaped like a shepherd). I promise he isn’t dancing, by the way, but regarding a travelling star with wonder. 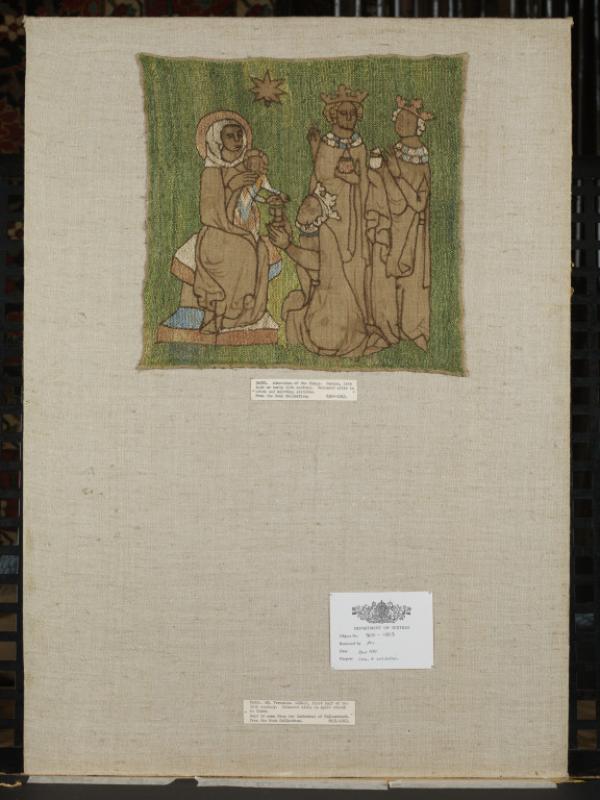 We’ve covered Holy Virgins, Baby Jesuses and shepherds, so next in the Nativity roll-call must be the three kings/wise men/magi who so famously invented Christmas presents. The creator of this piece obviously called them kings, as each is depicted as a medieval monarch complete with a golden crown. 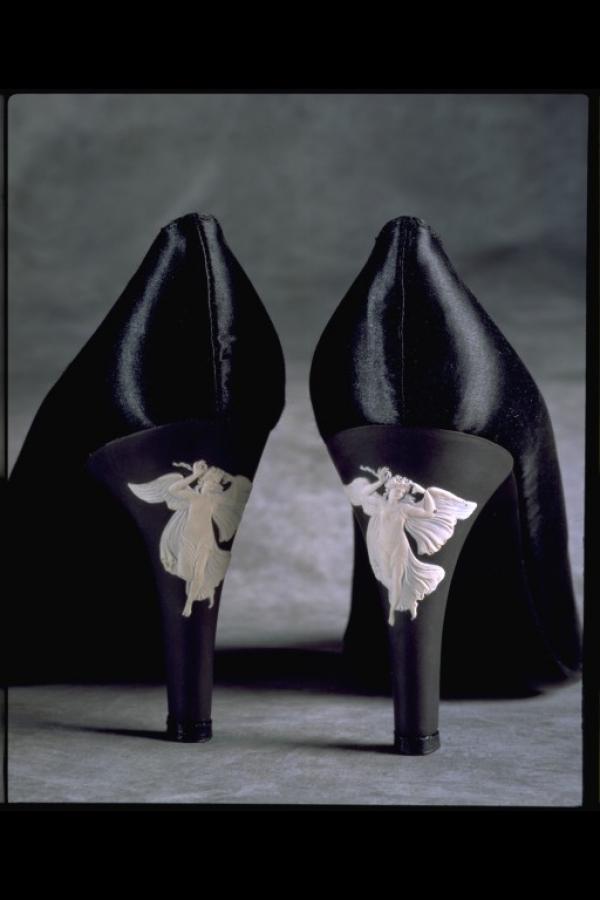 Finally, I can think of no better or more pious manner in which to celebrate the saviour of mankind than by sporting porcelain versions of his heralds on a pair of silk satin evening shoes. Obviously Rayne and Wedgwood thought the same in the 1960s when they produced these. BONUS FACT: Archangels are actually considered one of the most junior kinds of angels, which suggests that even heavenly matters are subject to bureaucratic processes.

Note: there are only fifteen shopping days left until Christmas.

Note on the note: none of the above are for sale.

Note on the note on the note: BUT they can all be seen by appointment, which is a bit like owning them. Plus they’re held by a public body, so everyone owns them a little bit.