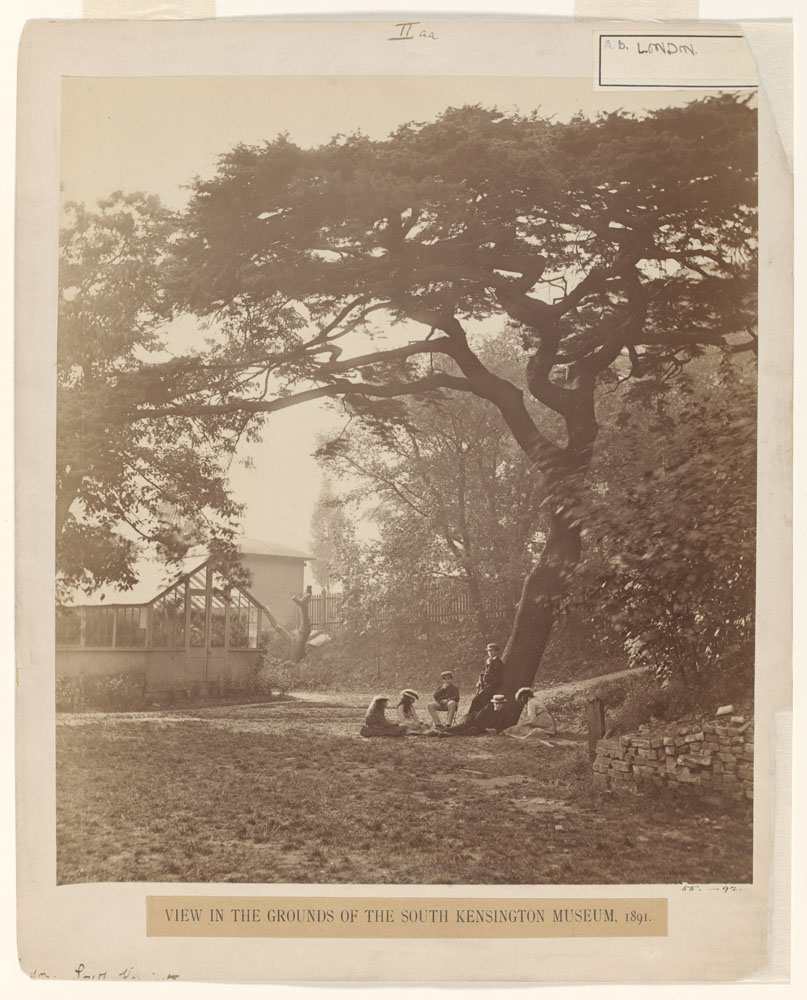 The year is 1899 – The rise of Albertopolis is in full, dramatic swing, and South Kensington is quickly becoming a stronghold for the decorative arts, science and culture in Victorian England. The Natural History Museum sits proudly over Cromwell road, South Kensington tube station is bustling with travellers, and the majestic Brompton Oratory presides over Brompton Road. 1899, the turn of the century! This is the year of the Victoria and Albert Museum. The year when the South Kensington Museum (as it was previously known) cultivates its collection with beautiful objects and one of the grandest additions ever to the Museum is approved for construction – the Aston Webb Building. It is May. Dressed in black, still mourning Prince Albert’s death nearly thirty years before, Queen Victoria lays the foundation stone of the new V&A and proclaims ‘I trust it will remain for ages a Monument of discerning Liberty and a source of Refinement and Progress’. It was to be her last formal public appearance.

The construction did not come without its hurdles, and was finally completed in 1909. The enormous new façade was incredibly ornate and filled with sculpture and decoration, but it had a simple purpose. It unified the Museum and connected many of its piecemeal iron framed exhibition halls into a much more cohesive scheme. In the first written guide to the Museum, the principle architect, Aston Webb explained that the key benefit of his plan was that it enabled the visitor to orientate themselves inside the building and get a quick feel for the displays. This has to this day remained a key goal in all V&A building projects and gallery renovations.

A beacon of knowledge, a ‘schoolroom for all’ as Henry Cole – the first Director put it – the Victoria and Albert Museum would continue to develop and grow in the years to come. For some areas of the Museum however, these transformations would arrive quite a bit later, some in 20 years, others over a century. Others, though, were more pressing. The amazing growth of the V&A, and developments in industrial technology, brought the necessity for boilers to power its many buildings and galleries. But where to house these monstrous coal-crunching machines? The Boilerhouse Yard, once a small, slightly over-grown little park nestled between Exhibition Road and the Residencies block of the museum was just the spot. In 1909 the Aston Webb Screen was built. This was a clever architectural intervention and an elegant solution to hide the boilers, featuring a solid stone wall across Exhibition Road with a crested central arch, topped by a graceful colonnade allowing passersby a few discrete views of the surrounding buildings.

As the 20th century progressed, although the V&A continued to amass its collections and inspire new generations, the need for the once indispensable V&A boilers slowly disappeared. Electrical power was woven into the fabric of the Museum to light and heat the many galleries, leaving the Boilerhouse yard free from boilers, but unused and hidden from public view by the distinctive Aston Webb Screen. In the 1970s a series of buildings was constructed, with access granted through the central arch in the screen.  In the 1980s these areas hosted a series of exhibitions devoted to industrial design. Some examined Art and Industry and products – others looked at individual firms and personalities such as Sony and Kenneth Grange. There were a few outlier exhibitions dedicated to robots and handtools. Though short-lived, this white cube within the Museum eventually evolved separately into the Design Museum on Butler’s Wharf near the Thames.

It is now 2010. Design exhibitions have long fled this area of the Museum, the central gate in the Aston Webb Screen has become a useful, but slightly underwhelming school’s entrance, and the screen still serves to hide the mossy buildings behind. A few proposals have been put forward to develop the Boilerhouse yard and dropped – most notably the Spiral by Daniel Libeskind. But the stirrings of a grand transformation lie ahead. A design competition to redevelop the site is being drafted. Ideas spark and connect in architect’s offices. And not long from now, though future countless meetings, revisions, and hours spent over plans, a completely new space and experience of the V&A will evolve. Grade 1 listed buildings and the Aston Webb Screen will connect with contemporary space. A completely new entrance into the Museum will be made, enabling visitors to orientate themselves and understand the building. And the world’s first ceramic courtyard will provide new outdoor space for South Kensington. More than a century after the Aston Webb Screen was created to unify the Museum, the Exhibition Road Building Project will take up the mantle as the largest physical transformation of the V&A, and continue its mission in educating and inspiring all who enter its doors.

We love a little bit of boiler history. Thanks for this great post.