The Exhibition Road Project has reached an exciting moment as concrete works are finishing  on site and the massive steel trusses which form the roof over the new exhibitions gallery (and support the weight of the courtyard) are being installed.

Carolina Bartram, Associate Director of Structures at Arup and a key member on the  project team tells us more about this key element of the project build:

The idea behind the steel structure was one of the key concepts at the competition stage in 2010.  The structure fills a space whose top surface is defined by the courtyard levels and whose lower surface is defined by the origami-like ceiling (whilst also squeezing in a new mezzanine cloakroom area…).  At the design stage the Arup and AL_A   teams explored many different geometries and structural options for spanning right across the courtyard space to find one that still had the beauty and intricacy of the competition scheme, but was also build-able and efficient.  The final shape for the trusses are optimised to maximise structural performance, and floor to ceiling height in the gallery which varies from 7 to 9 metres high.

Over the last year we have been collaborating with the Wates and Bourne Steel teams to finalise details and develop the sequence of construction processes, and earlier this year fabrication on the trusses started down in Poole. On our first trip down to see Bourne Steel in March we knew for sure that this structure was going to be something special. 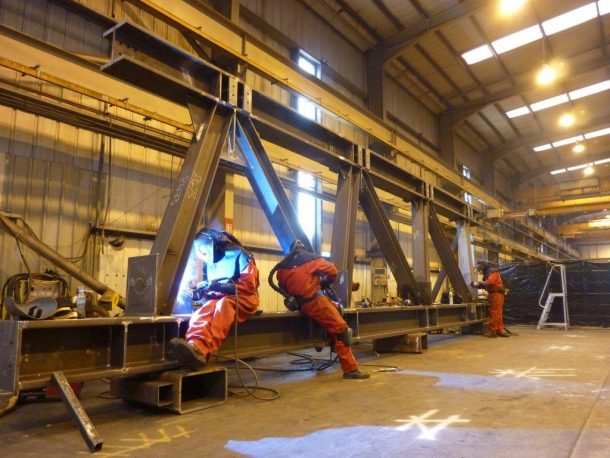 The first piece of steelwork arrived on site a few weeks ago – starting with the large primary truss that cuts across site and forms the edge to the mezzanine cloakrooms. Then the “toblerone “trusses (a name coined by the Bourne team which we now all use) are being delivered nearly every morning. At up to 20m long and maximum 9 tonnes in weight each they are lifted into place from the road by the large crane and then bolted together. (If you are on Exhibition Road early one morning you may get the chance to see it hovering over the site…) 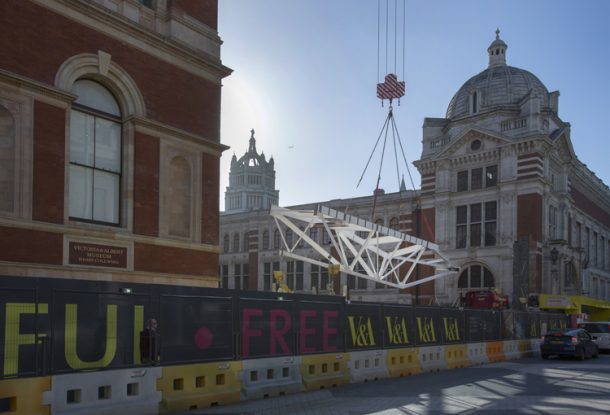 The strange thing is that the arrival of the trusses and the completion of the B2 slab (the exhibition space floor) makes the site seem quite large compared to how it appeared only a few weeks ago and you really begin feel the scale of the spaces that are being created and developed further every day. 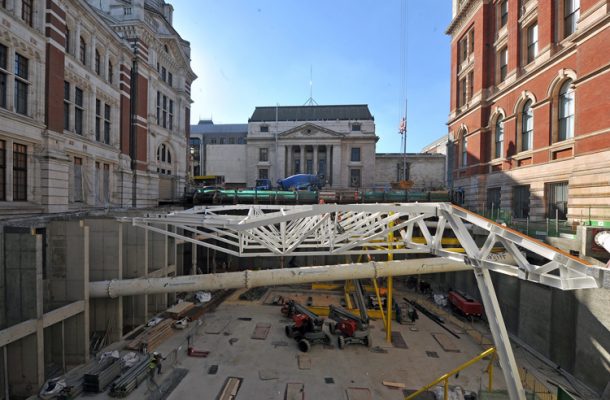 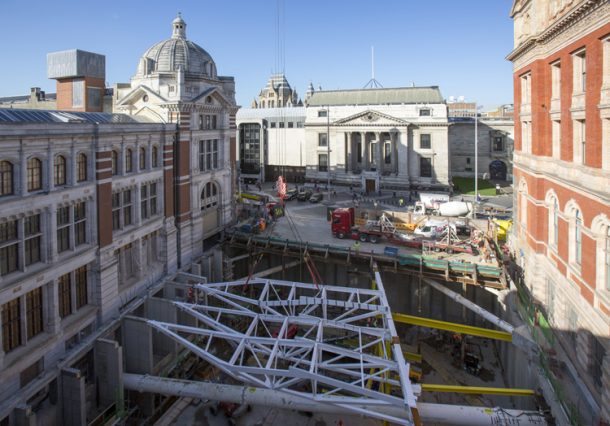 Once the steelwork is all fixed and bolted in, a metal deck will be fixed to the tops of the beams and concrete poured onto this to form the courtyard surface. At this point the concrete and steel together will act not only just to span across the courtyard but also to prop  the walls of the box against the pressure of the earth and of the foundations of the adjacent buildings  and we will be able to remove the large temporary props that  were installed during excavation. This will be another exciting milestone this year, before the areas under the courtyard slab are waterproofed and prepared for the installation of building services.

Hi there, thanks for your feedback! Answers to your questions below:

1: The completion date for the project is Autumn 2016, with the first exhibition opening in the gallery in Spring 2017

2: Thank you for letting me know about the tags – they may seem inconsistent as they relate to various topics and elements within the project design (such as specific engineering topics, or phases like excavation), but in future we will try to list all past, relevant tags within new posts. All our blog updates will be posted here, and you can read our newsletters and other project information on the FuturePlan page of the V&A website. Here is a link:http://www.vam.ac.uk/page/e/exhibition-road-building-project/.

Hope that helps you, and thank you again for your feedback!

Please can you say when the Aston Webb Screen is to be reinserted?

Please can you say when the Aston Webb Screen will be reinserted (am re-posting this, as am not sure the last one went through…)

The Aston Webb Screen will return this year. The stones have been in secure storage since construction commenced in 2013, and they will be transported back and reinstated in their original location on Exhibition Road from late spring. Please feel free to email me (h.kukura@vam.ac.uk) if you have any further questions on the screen, or any other aspects of the project. Kind regards, Hailee