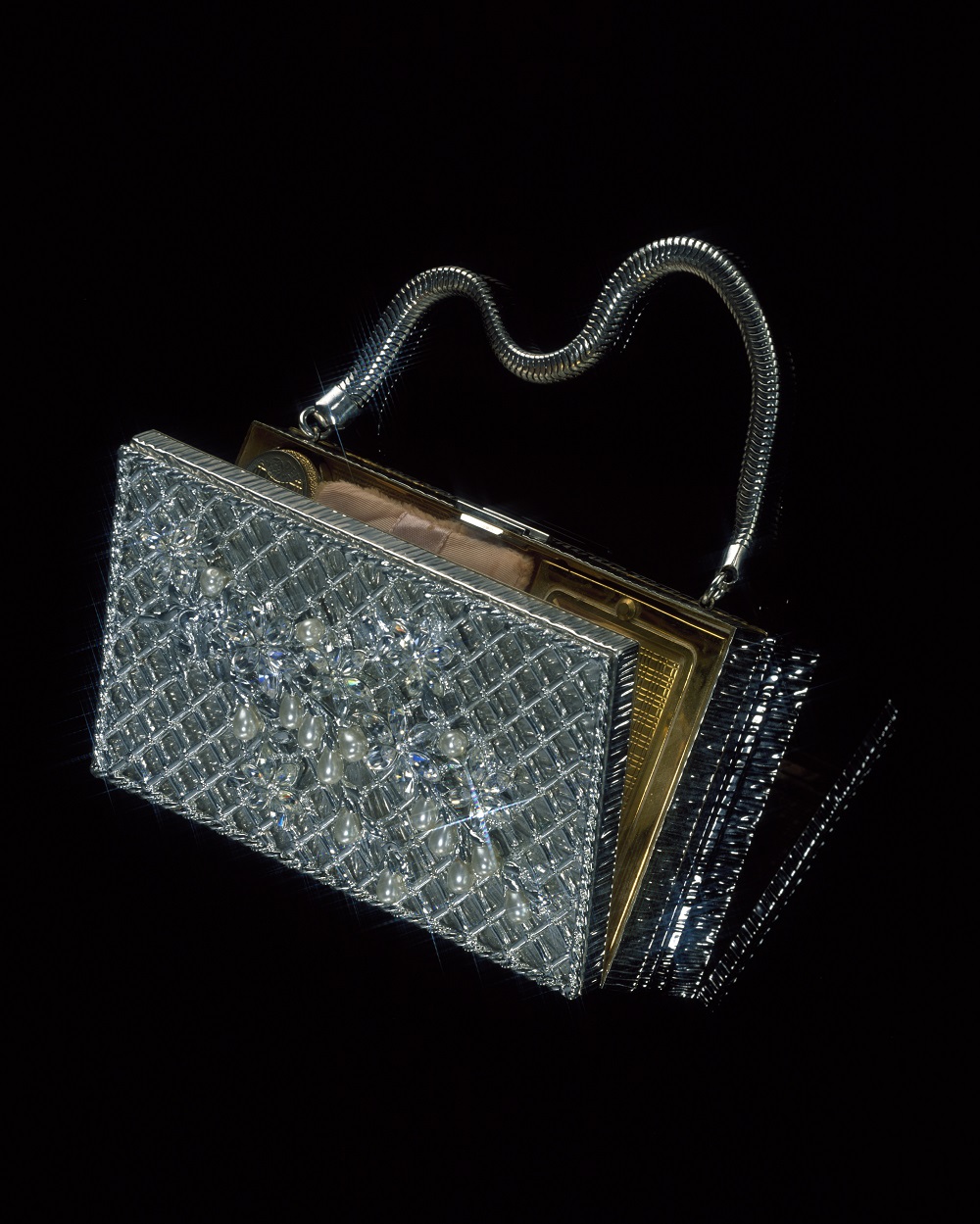 We all need a little glitter come the festive season, and brides are no exception to this rule. As previously explored, winter weddings – preferably made white with snow – offer the opportunity for velvet dresses and fur stoles. The dark days also mean such ceremonies are lit by further candles and lights than their counterparts later in the year. Under such lighting, a bride may sparkle all the more.

In the words of fashion historian Claire Wilcox, ‘accessories are the exclamation point of fashion’. Such a punchy purpose makes them well suited for this winter sparkling. When Carol Mitzman married Jeffrey Howard at the Dollis Hill Synagogue, London, on 26 September 1956, she carried a bag fit for just such a purpose. This style of small decorative vanity bag,known as a minaudière, was introduced in the 1920s. Carol’s minaudière, which is by the American Evans Case Company, is made of metal decorated in circular designs with faux pearls and is held by a snake link strap.

While minaudières first came into fashion in the 1920s, they became all the more popular in the 1950s. There were three dominant styles of bags in that decade. The first was the traditional, structured handbag held on a metal frame, generally closed in the middle by a clasp. The second was the clutch bag, key to an evening out. The third was the open bucket bag, a convenient but still smart choice for shopping. Each of these styles indicates a change in the lives of women. The handbag is suited to a woman on the go – securely holding and stylishly shutting away the essentials of a working or social day. The clutch bag is a convenient and slight accessory for complimenting but not encumbering an evening outfit – and so aiding a woman’s night out. In 1947, there were apparently only ten self-service shops in the UK, but the idea of independent shopping was growing – and so the need for a roomy bucket bag to accommodate your purchases.

The minaudière represents two changes for women in itself. First of all, it implies the growth in both use and acceptance of cosmetics for women in the period. Minaudières are neatly designed with interior fittings to hold a woman’s essentials – in this case, to hold a lipstick, powder and puff, with room left perhaps for cigarettes and small change. These products were at the ready for a particular use – the glamour of parties and nights on the town. Therefore, by meeting the needs of a night on the town, the second change these designs imply is the growing excitements of nightlife and gradual liberation of the social lives of women.

I would say that is a notion which is worth more than a little festive glamour and glitter – and I hope you get to enjoy some of your own this season!