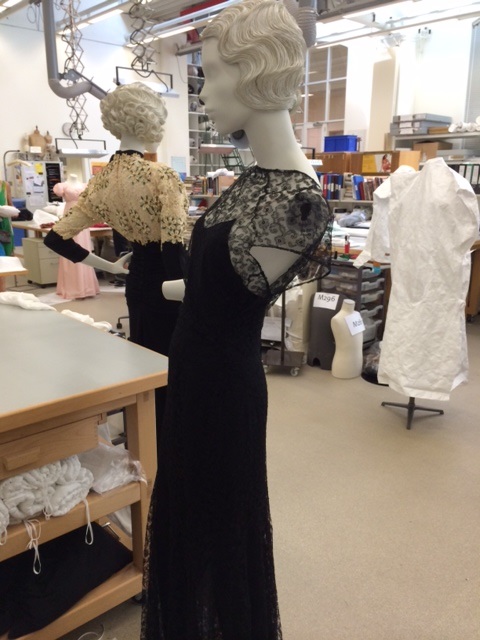 Given we have nine days to hang a two gallery show, object installation is planned down to the hour.

A team of six skilled V&A technicians will hang over 300 framed works by Horst and his contemporaries, including a series of 25 large scale colour prints, reproduced from original transparencies.

As a photography novice I have come to appreciate the difference between the gelatin silver and platinum-palladium prints.

A dozen showcases will display Horst’s detailed sketchbooks, Rolleiflex camera and personal items to reveal the close knit nature of the fashion world in 1930’s.

Who did Horst list as his next of kin on his US army tags?

Exhibition Curator, Susanna Brown worked with V&A Fashion Curators to select nine V&A Haute Couture ensembles, star pieces from our Textiles and Fashion collection. In a predominately 2D exhibition these dresses by couturiers such as Vionnet, Chanel, Mainbocher, Molyneux, Schiarperelli and Lanvin represent some of the most spectacular dresses Horst photographed throughout his illustrious career.

How do you display 93 Vogue Covers?  In one very long (9.5m) glass showcase of course!

Between 1935 and 1963, Horst’s photographs graced the covers of over 90 editions of American and British Vogue. When displayed alongside one another the audience will clearly see the stylistic changes which epitomised this period, from wartime resourcefulness to the origins of the September issue!

It was surreal unpacking the magazines alongside V&A Conservators, a bit like watching an episode of Mad Men. Each back cover had advertisements for Lucky Strike and Camel cigarettes, women’s hosiery and famous New York hotels etc.!

The role of beauty in Horst’s photographs

Fascinated with the power of lipstick, Poppy King (Founder of Lipstick Queen) visits the exhibition and discusses the subject of beauty captured in many of Horst’s...

Carmen Dell’Orefice’s speech at the opening of Horst: Photographer of Style

Reputable image and style makers from across London displayed their admiration for master photographer Horst P.Horst last night by attending the definitive retrospective...