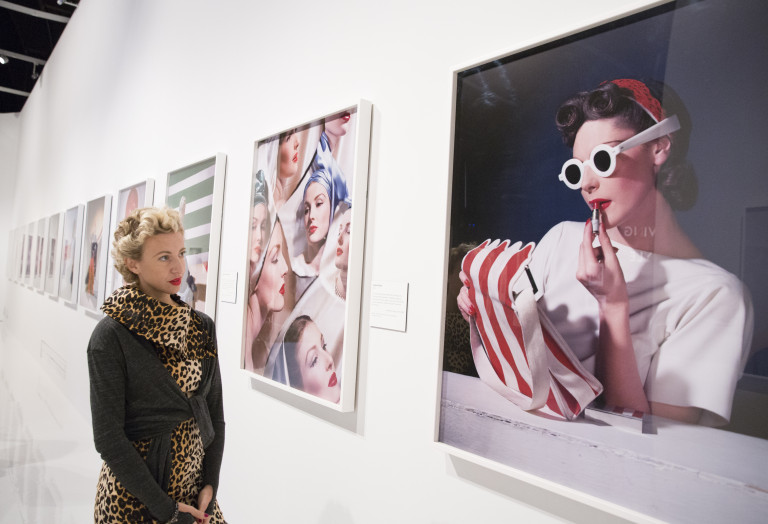 Fascinated with the power of lipstick, Poppy King (Founder of Lipstick Queen) visits the exhibition and discusses the subject of beauty captured in many of Horst’s photographs.

The unfolding narrative of female beauty is one written by forces within and forces without. A good photographer can capture one or other, only great photographers capture both. Horst is just such a photographer.

Walking around the Horst exhibition it was very clear to me that this was a man who sought not simply to capture beauty but to explore it. My exploration began like so many little girls when I snuck off with one of my mother’s lipsticks and surreptitiously applied it to my lips to see what happened. The transformation that took place on my inside not simply outside mesmerized me, I suddenly felt like a superhero version of myself, capable of anything.

I have been so fascinated with the power of lipstick ever since that I started my first lipstick brand as soon as I finished high school and over 20 years later I am still as transfixed with this icon of the female experience. It has been my lens through which I have looked at the role I think beauty should play of empowering versus enslaving, a tension so stunningly captured in many of Horst photographs.

Though he is most famous for his fashion work it is clear that beauty itself was a subject that fascinated him. When he did turn his attention to beauty, it was not about the portrayal of perfection, but rather the pursuit of it. It is in his pictures about beauty that I could really see his empathy for women with the expectations of beauty. One of the many wonderful surprises of this exhibition for me was here was a man who both sought to construct and deconstruct beauty at the same time.

Most obviously in his 1939 Electric Beauty photos where you see a woman willing to risk being electrocuted and other tortures to be more beautiful. These photos point not to the absurdity of the woman but the absurdity of the pressure. Never did I get the feeling that he was attacking women for wanting to be beautiful, quite the contrary you can see that he relished making them beautiful, but rather he was questioning the industry that surrounds it.

There is something challenging in Horst’s beauty work, it is never saccharine, never reduced merely to the surface.  His 1946 portrait of a young Carmen Dell’Orefice called Carmen Face Massage has such a haunting elegance to the sadness of her eyes in the midst of this ritual that it stood out to me as one of the most stunning beauty pictures I have ever seen. As the viewer you are made less aware of her beauty by the mysteries of her mind, you want so much to know what she is feeling in this photo.

His ability to intrigue you by more than his models looks is one of the greatest contributions to beauty that a photographer can make. To make it clear that beauty has an interior dialogue not simply an exterior one. He can’t seem to help himself but bring forth the desire to know what a woman is thinking.

His beauty cover for American Vogue in 1943 is a perfect example of this. In this we see a collage of 7 faces in varying profiles, never straight on, but instead the beautiful model Susan Shaw is pictured in moments of deep thought and reflection.

She wears red lipstick, which of course is what drew me to this photo, but the lipstick is there as the gateway to her mind. In one shot she has her lips slightly parted, not in a pornographic way but as though she is about to speak and it is what she has to say that is so visually arresting about this image.

Seeing it reproduced as an image in its own right is so much more powerful than the cover it eventually became where the title covers the woman poised to talk and the incongruity of the note that says “Beauty Issue. How to Look Your Best, Feel Your Best, Do Your Best” when Horst’s photograph says so much more. It belies these answers by asking so many questions.

This is what I love so much about Horst and his approach to beauty: never once does he pretend it is the solution. He leaves it up to us to decide that for ourselves by bringing story into every photo, he brings the story of being female to the forefront without ever suggesting it is easy yet never reducing it to a single factor.  He always obscures something from our gaze so that we have to think about it as if to say “I think therefore I am beautiful” and for that he has truly captured what beauty is. A mind body connection.

Thank you! It’s a great article for people intersted in fashion photography.

Carmen Dell’Orefice’s speech at the opening of Horst: Photographer of Style

Reputable image and style makers from across London displayed their admiration for master photographer Horst P.Horst last night by attending the definitive retrospective...

Conservation of a Vionnet Dress

This beautiful dress was designed by Madeline Vionnet in 1937 and was given to the V&A in 1968 by Cecil Beaton. It will be on display in the Horst: Photographer of Style...