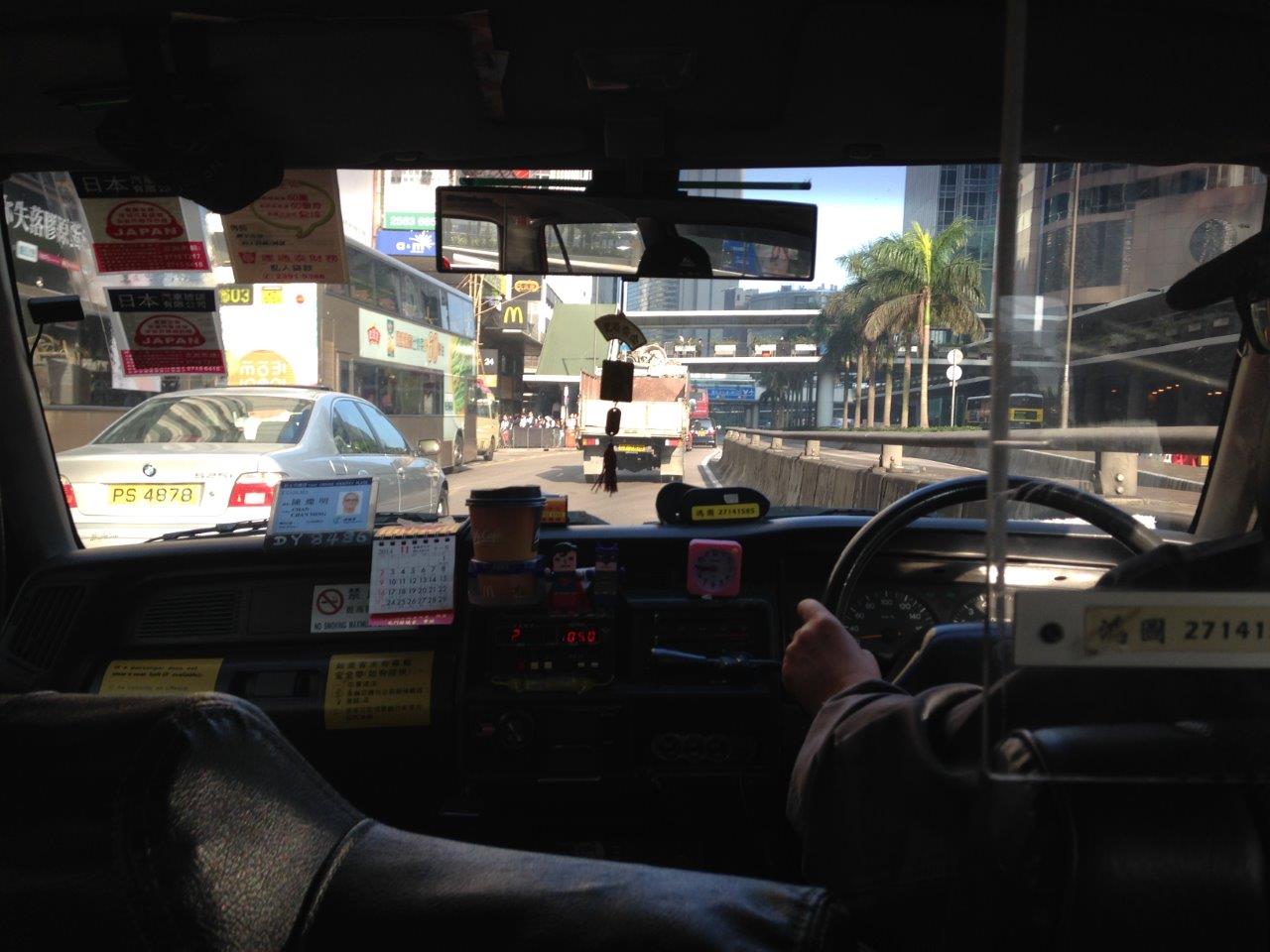 For the Shekou project, Luisa Mengoni, Brendan Cormier, Sunny Cheung, and Rong Zhao travelled to five cities in two weeks, to research the current state of design in China – to see how design is produced, perceived, consumed, and discussed across the country. All of this, to figure out how the V&A, through its work with the Shekou Design Museum, can contribute in a meaningful way to the broader ambition of China to become a significant design presence in the 21st century. Over the next few weeks we’ll be publishing reports from each of those cities – Hong Kong, Shenzhen, Shanghai, Hangzhou, and Beijing – and the thoughts and observations gained.

Hong Kong is an outlier. Just an hour away from Shekou, it seems the most exceptional to our research. Reunited with China in 1997, and still separated by a border, a language, and myriad cultural and administrative differences, the city seems less a part of China’s recent dramatic rise, than a close witness.  Hong Kong, of course, experienced its own economic boom from the 1960s to the 1990s as one of the four so-called Asian Tigers (including South Korea, Taiwan and Singapore) where it became a manufacturing powerhouse as well as developing a robust finance sector and creative industry (most notably in cinema). Today, with a population of 8 million, it is significantly smaller than its younger brother to the north, Shenzhen, and absolutely dwarfed by Shanghai and Beijing. Its manufacturing industry has also diminished, leaving the financial industry as its main calling card. And with rising rents, a high cost of living, and lack of studio spaces, artists and designers struggle to make ends meet. Still, Hong Kong is anything but stagnant, with several cultural initiatives on the books to combat the threat of creative decline, many of which we’ve scheduled to see.

But first a brief trip to Chungking Mansions. Maybe like most North American teenagers in the 90s, my first introduction to Hong Kong was through the movies – the blazing guns of John Woo and the romantic nostalgia of Wong Kar-Wai. So quite selfishly, Sunny and I make our first trip to the titular setting of Wong Kar-Wai’s masterful Chungking Express.  Built in the 60s, Chunking Mansions is one of the densest areas of Hong Kong – a city that is already exceptionally dense – with 4,000 residents, and an impossible combination of budget hotels, currency exchanges, curry shops, and tailors, packed into one city block. 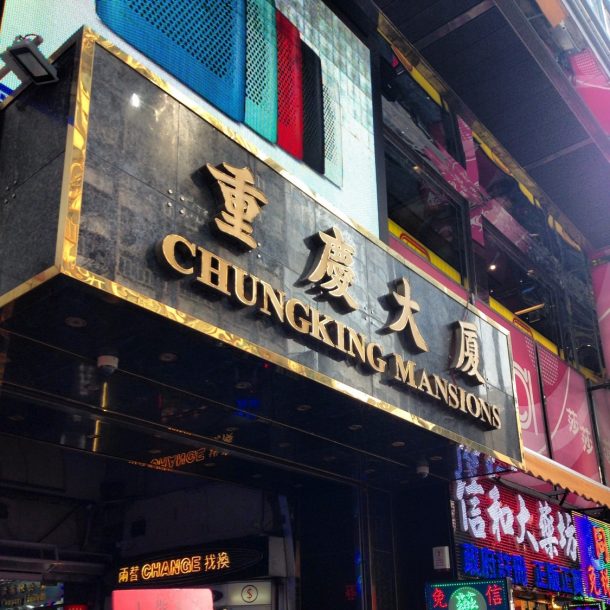 The blond-wigged, sunglass-wearing Brigitte Lin, who in the movie can be seen exchanging with South Asians in dimly lit corridors and stalls, is alas nowhere to be found. However there are plenty of South Asians ready to sell us watches and bags, or whisk us off to a tailor for a fitting. We let ourselves be whisked, following our man – one of a dozen who approached us on the street – through a series of corridors to arrive at a small interior shop lined from floor to ceiling with fabric rolls. Beyond the thrill of navigating the tight corridors, there is nothing terribly exciting here. The suits are standard, the bags cliché. I ask a man for a Braun watch; he says I won’t find one anywhere in Hong Kong (two hours later I did). Instead he shows me the standard luxury brands. The density of Chungking promises endless variety and surprise, but in our short visit delivered only a repetition of clichéd brand-name taste.

Next up, we meet with graphic designer Freeman Lau at a café in PMQ just off Hollywood Road. PMQ (Police Married Quarters) is a recent conversion of two 6-storey residential slabs into studios and shops. With Freeman, we first discuss the rise of design museums in China. In Shenzhen alone, three new design-related museums are opening in the near future. We also talk about the strategic relationship between Hong Kong and Shenzhen. It easier to develop and finance a brand in Hong Kong and then manufacture in Shenzhen and distribute throughout mainland China. This is a tactic many companies are taking, and many designers are choosing to move to Shenzhen because of its close relationship with production. 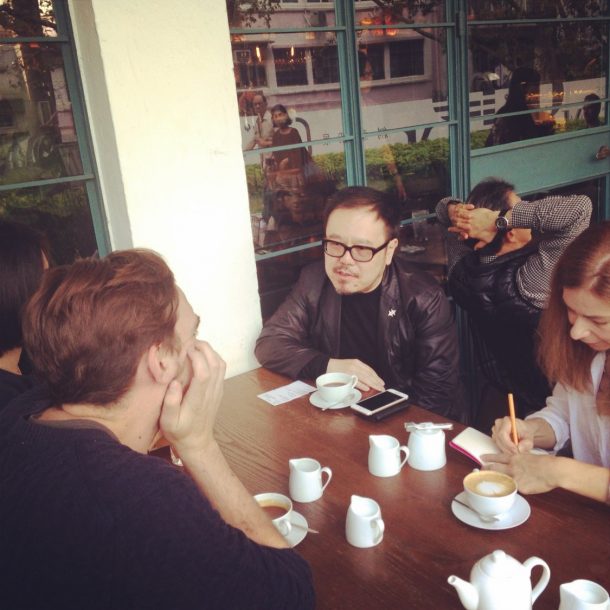 Looking around at PMQ, everything he says seems to make sense. The clientele at the café is conspicuously wealthy and white-collar . The menu decidedly upscale. Despite best intentions, this is not the site for local design creation, but signing contracts. Later we walk around the site, window shopping. Design here means consumer goods with a design look. Certainly design objects, but a very narrow definition of design. While designers purportedly also produce goods here that is less apparent. Later we meet with Edmund Lee, Director of the Hong Kong Design Centre, the organization that spearheaded the development. He tells us there are 100 studios on site, with a long waiting list of designers hoping to get a spot. An indication that demand is high, and available studio space in the city low.

On a walk through town later in the evening, we get a glimpse at a different kind of design. Crossing Connaught Road, we overlook the barricades and tent-city of Occupy Central. We are just days before the whole site will be cleared by police, with the original momentum of the movement having died down considerably. The empty thoroughfare gives the impression of a zombie apocalypse. As was made clear in the V&A’s Disobedient Objects exhibition, protests have a certain amount of design embedded within them. From the posters, to barricades, to protocols, an effective protest movement takes thoughtful design, and the Hong Kong protesters have been lauded for their ability to sustain their movement, and deliver their message, all with little violence. But good design can only go so far, and with negotiations seemingly hitting an impasse, it’s not clear what the final outcome will be. 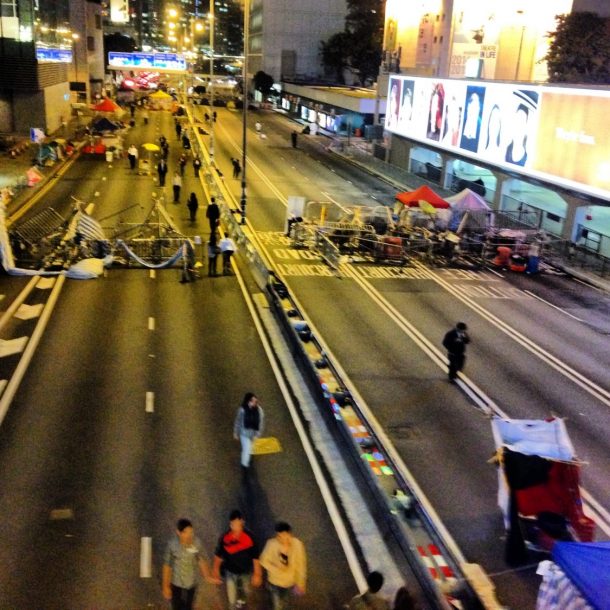 From the liminal space of Occupy Central, we move on to an almost purely commercial one, Adrien Cheng’s K11 shopping mall. Claimed to be the world’s first art mall, the space intends to exploit the one thing Hong Kong does really well – shopping – to get people thinking about art and design. Throughout the mall are several art installations – although I confess to not having noticed any of them – and in the atrium café we immediately spot and inspect several pieces of designer furniture laying about, including Thomas Heatherwick’s dizzying Spun Chair and the standard Eames and Starck chairs that act as universal signifiers of design taste.

But like PMQ, K11 promotes a very consumer-driven sense of design. Design as value-added status symbols. Even this is not handled very well, with mostly generic brands filling up the real estate. There is one exception however: The K11 Art Gallery. Here the intention was to bring art to the masses, by having the gallery windows open up onto the underground subway station. Millions of people streaming by can view the gallery contents. And the gallery is indeed quite good. But in a cruel twist of bureaucratic fate, access from the subway, which was initially hoped for, is sealed off, due to concerns from the Hong Kong Metro, meaning one must pass through a store in the mall to arrive at the gallery.

Perhaps the biggest cultural project under development in Hong Kong at the moment is M+, a part of the West Kowloon Culture District. Although the building, designed by Herzog & De Meuron is far from being finished, the institution is busy building their collection and holding a series of off-site exhibitions and events. As a museum for visual culture, it aims to create a global collection from an Asian perspective. In doing so, they are looking to the streets and everyday life of Hong Kong and other Asian cities, to find significant objects and works of art to acquire. Notably, they created an online exhibition of neon signs, a nod to Hong Kong’s unique legacy of street signage. On our second day we met with Aric Chen, Jennifer Wang and Shirley Surya who are running the Architecture and Product Design section of the museum. Their museum will open about a year after ours, so it was interesting to exchange notes about audiences. A distinction was tentatively made that Hong Kong audiences are much more about fashion and luxury brands while Shenzhen audiences are more tech-aware and into digital innovation. Regardless, we both agreed that to really engage audiences in broader discussions on design, certain entry points need to be established that fall back on references that audiences would easily understand.

Later we drove out to the Hong Kong Polytechnic University to join a full-house audience for a session of M+ Talks. Because there is no building yet, it’s especially important that M+ build momentum for their institution through events such as these. That evening, curators from the MoMA and the Tate Modern discussed collection and exhibition strategies.

On our final day, just before taking a ferry to Shenzhen we squeeze in a meeting with the Hong Kong branch of Office for Metropolitan Architecture. Rem Koolhaas moved his Beijing office here to work more closely on a competition for the West Kowloon Cultural District, which they eventually lost. Jedidiah Lau and Paolo Caracini show us plans they are working on called Taiyuan Industrial Heritage Transformation in Taiyuan, Shanxi province. It’s a heritage revitalization project that aims to transform a former fertiliser plant built after 1951 on a Soviet model into a 200 hectare cultural district. One of the key observations they make is that many cultural districts in China invest a lot in the display and consumption of culture but very little in providing space for the production of culture. In their plan, they’ve provided space for a special branch of the Chinese Academy of Fine Arts where sculpture students would fashion work out of the scrap metal retrieved from the surrounding abandoned factories.

Pedro Gadanho once told me that Hong Kong, for him, was like London in the tropics. And while the left-side driving and the booming financial sector are clearly similar, there’s a third link that occurs to me now, and that’s the problem of space. In both cities, designers struggle to afford space to be able to create, and with high costs of living, there’s also a pressure on time, as designers need to secure second jobs. Hong Kong is a shopping city par excellence, but a thriving consumer market doesn’t insure thriving cultural production. Another problem is the framing of design value here as something that is purely commercial – design as a way of elevating a brand and a price tag. Our brief 72-hour ramble through the city doesn’t allow for definitive claims, and for sure, these observations are rather broad-stroked, so I look forward to returning here and pealing back some more layers.

I really enjoy the tour of china the fastest growing country in the world. It’s a place where we can grow our business. I think the future is good