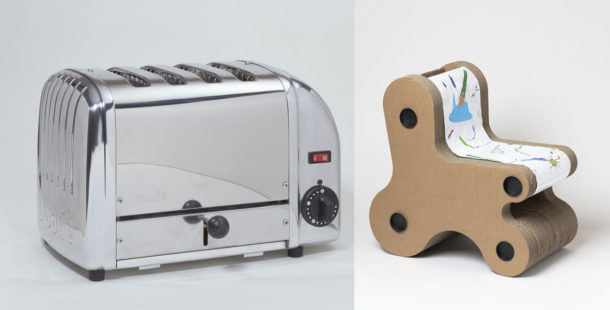 This post is part of a series called ‘Design Value Debates’, which highlight objects from the V&A Collection which will appear in ‘Values of Design’, the inaugural exhibition for the V&A Gallery at Design Society. In each post, we will look at objects which propose a different way of addressing a certain value, and what that says about design. This week we look at the value of durability in the form of a toaster and a children’s chair.

The Centennial Light is a light bulb that has been burning continuously in a fire station in Livermore, California, since 1901. Well, almost continuously. It was briefly turned off in 1976, to allow for a move to a new fire station, and in 2013 went off due to a fault in the power supply. Regardless, the intended message of the bulb – and the reason that a special committee is dedicated to keeping it running – remains unfazed: things can last much longer than we expect them too.

Following the Second World War, the term ‘planned obsolescence’ became a much derided term in the design world. The idea behind it was that companies would purposefully design objects with a shortened life span, so that consumers would be encouraged to buy more. This is indeed what transpired with light bulbs. In 1924, a coalition was formed between major light bulb manufacturers, who all collectively agreed to make light bulbs that would last a maximum of 1,000 hours.

In 1960, design critic Vance Packard wrote The Waste Makers, a book that railed against planned obsolescence, decrying the waste, cost, and inefficiency of making objects that broke too soon, and could not be repaired. His book was a bestseller, suggesting that a general public still valued consumer goods designed to last. And indeed, while planned obsolescence has helped drive profits for many large companies, there still exists a subset of products that thrive on the consumer’s desire for durability.

One such example is this Dualit toaster. Dualit was first established by engineer Max Gort-Barten in 1946 in a small workshop in London; today it has become a household name in the UK for kitchen appliances. Its first product was a stainless steel toaster, specifically designed to be durable and long-lasting, which is still in production. It has visible screws, making it easy to disassemble and repair, and the heating elements are armour-plated to protect from damage. Cased in polished stainless steel, it also conveys the idea of durability through its very look and feel. The marketing of its longevity was also explicit, as this extract from a 2002 brochure attests: “In an age in which so much becomes obsolete overnight, the Dualit toaster is built without compromise. It remains one of the few objects to survive the passing of the years with grace and style.”

A similar critique against obsolescence has been revived today, this time concerning digital devices. Dutch designer Bas van Abel uses the slogan ‘if you can’t fix it, you don’t own it’, criticizing the fact that manufacturers of computers and smartphones have strategically made their devices virtually impossible for consumers to modify and repair, following a similar tract of planned obsolescence that played out in the 20th century. In response, Abel has been working on Fairphone, a smartphone that can be easily disassembled, modified and repaired, which is also ethically produced and made of sustainably-sourced parts.

What advocates of durability miss out on, however, is the idea that it’s not just the wear and tear of an object itself that can make it obsolete, but also broader changes in a household and society. In that regard, the SPLAT Chair offers a useful counterpoint to the Dualit toaster. SPLAT is a simple children’s chair, which makes a few smart assumptions from the outset: first, that all children eventually grow up, and second that children generally don’t treat their possessions well. So instead of being some immaculately crafted design object meant to be cherished and kept forever, SPLAT is purposefully temporary. It is made from recycled and biodegradable cardboard so that when the child grows up, it can be disposed of with minimum impact on the environment. It also stores art materials, and its cheap design encourages children to draw and paint all over it.

Dualit and SPLAT are diagrammatic of an internal conflict most of us have when consuming objects. We want things to last, but we also want to be fashionable and flexible. We are given to alternate bouts of closet purging and keeping up with the Jones’, even if we claim to prefer ‘timeless’ design. What SPLAT does is acknowledge that possessions are temporary, and instead focuses much of its design priority on how it can be best disposed of. While we are told to consume less in the name of sustainability, our current market economy makes that an unlikely projection. SPLAT suggests an alternative sustainable future where, counterintuitively, things are made to be cheap and disposable rather than durable and long-lasting.