With Cars: Accelerating the Modern World still running ‘full gas/electric charge ahead’ in the new year at the Museum, it might be a good time to reveal some of the striking early brochures found in the NAL’s trade literature collection. It’s interesting to muse upon the advertising techniques used in each of the examples.

‘Practicality’ has been a theme prevalent from the early 20th century onward: concentration on the specs of a car, blindsiding people perhaps with the technicalities.

You can see above that the specifications are the main point of focus. The brochure contains appealing diagrams of the car and its construction.

This concentration on the practical goes hand-in-hand with showing the audience a vision of the progress achieved in that particular model. Each decade played with ideas of how a car could propel you into the future, highlighting how you would be at the cutting edge of technology.

Below is a 1932 brochure for the V8 car. The V-8 was the first low-priced, mass-marketed car to have a V8 engine, an important milestone in the history of the car industry. The look of the brochure is very much entrenched in the Art Deco period, with its bold gilt stylised cover. The emphasis here is also on the practical – it includes articles by critics, reinforcing the technological breakthrough and prestige of British manufacturing, and illustrations of the engine. 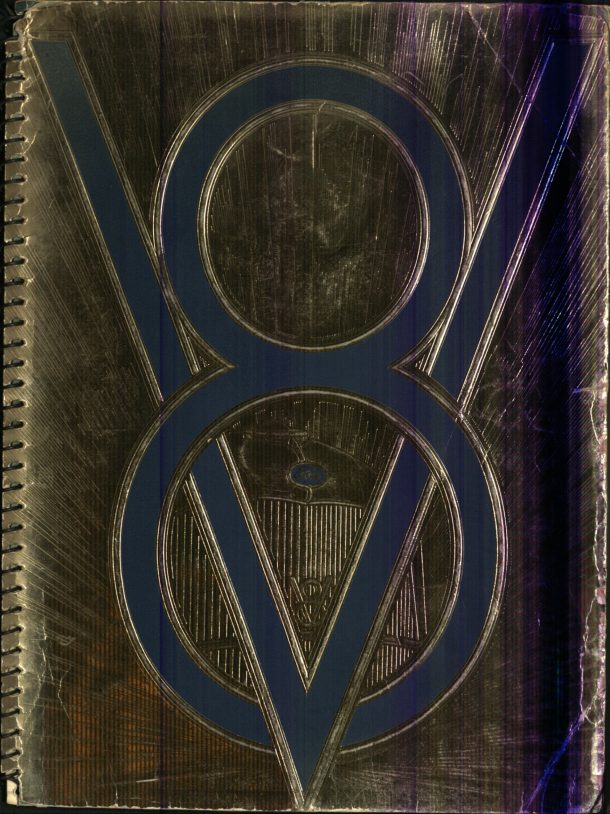 The 1936 brochure below shows the MG two-litre. Emphasised is how it ‘belongs not at all in the helmet and goggles era’, ‘concerned… not so much with the past, as with the future’ with the slogan: ‘Safety fast, comfort fast’. It contains a dynamic reproduction of an early watercolour by Frederick Gordon Crosby (who worked prolifically as an illustrator for Autocar magazine for most of his career). The watercolour conveys the speed of the vehicle and an idealised lifestyle around it. The brochure itself is made out of paper fashioned to look like leather. Further watercolours of the vehicle and a diagram of the chassis are placed inside, making the brochure reminiscent of a leather pocket on a car door. 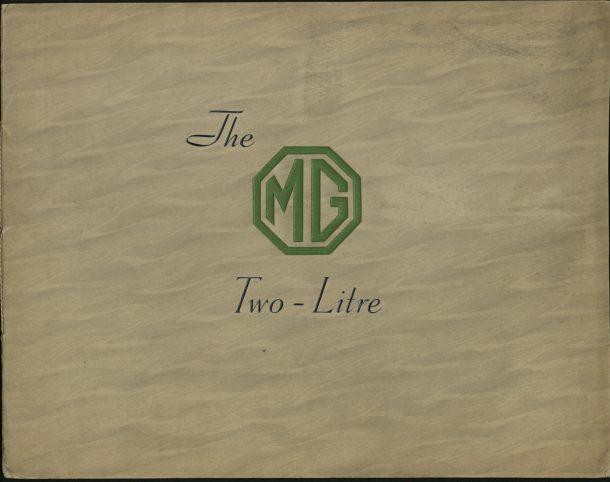 A sense of luxury was prevalent within much of the early car literature. Escaping the humdrum, achieving the dream of a luxurious lifestyle, became powerful themes. General Motors created an Art & Colour section in 1927, established to provide a variety of colour and styles for their various marques. This initiative aimed to make customers feel that the car could be an extension of their own choices and preferences. See below a brochure produced for the upmarket brand Buick for the Belgian market.

Car brochures can also take the dream one stage further and provide an almost alternative reality for the user, ‘a dream behind four doors’. This brochure from the Fisher Body Corporation (part of General Motors) presents beautiful double page spreads taking a theme from nature as a starting point for each of the vehicles. Interiors were as much part of the vision as the exterior design. 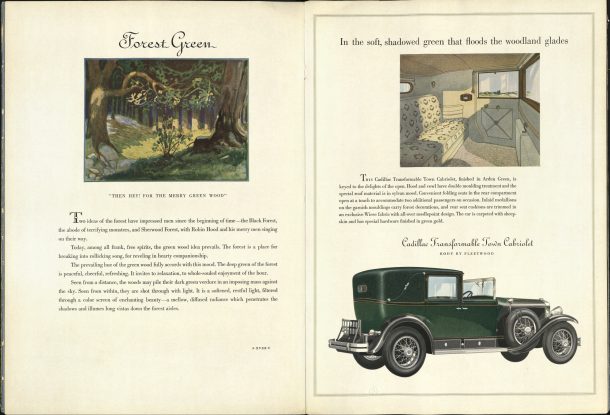 Lea & Francis’s brochure from around 1930 provides the vision of a new entity linked with positive attributes found in other domains of life, e.g. ‘Power’ linked with a vision of a waterfall, ‘Safety’ with the Bank of England and ‘Reliability’ associated with the British navy. 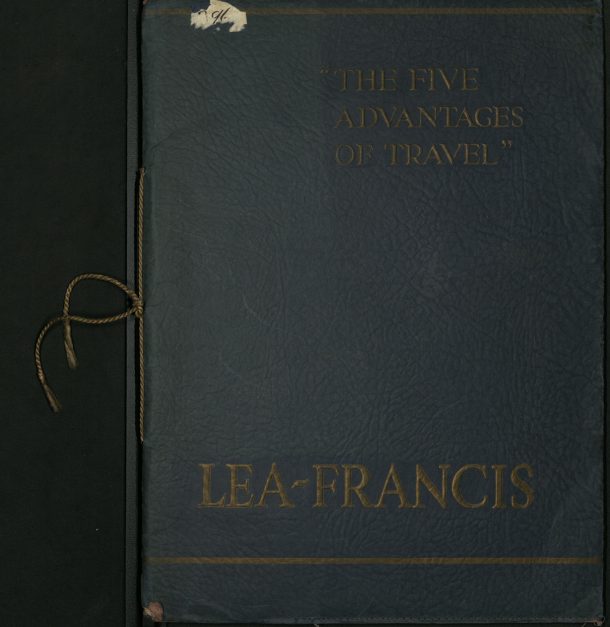 Another mock leather wallet, this time with a gold tassel fastening, plays with a 3000 year-old saying proclaiming five advantages of travel: e.g. the acquisition of knowledge, delights in companionship. The brochure names six advantages, implying how this model looks to the future and surpasses in fact the original advantages.

The material featured above formed part of a display and talks given at a recent Friday late: ‘Fantastic Automatic’. A list of all the material that featured can be found here and is open for request from the National Art Library, once registered as a reader.