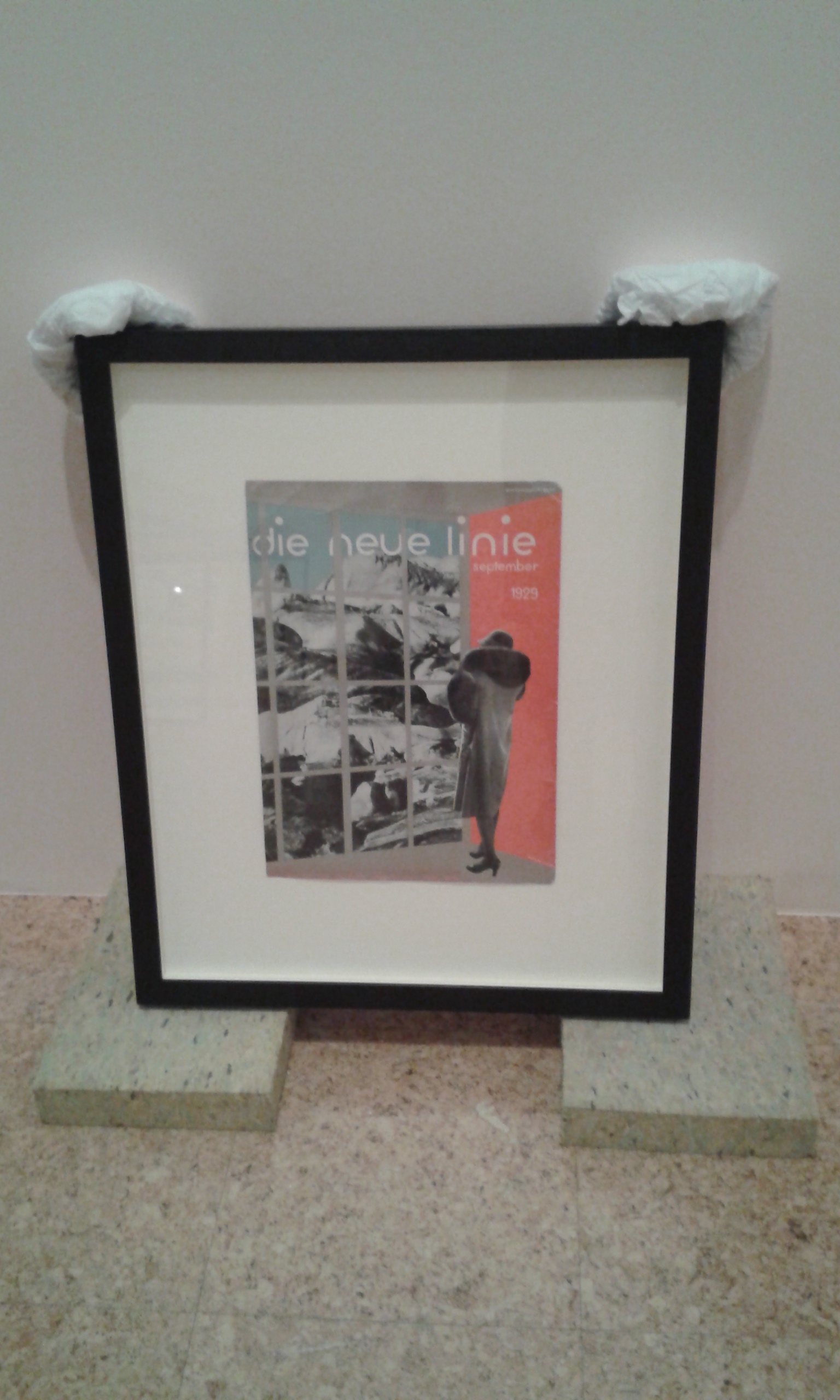 Some exhibitions really do stem from a casual chat between curators over drinks. About a year ago, a curator from the De La Warr Pavilion at Bexhill on the south coast was talking about their plans to celebrate their iconic 1930s Modernist building to an NAL curator. Our curator mentioned a collection of material in the NAL from the same period, and a year later I’m at the Pavilion installing works from this collection in their new show: ‘The New Line: Works from the Jobbing Printing Collection’.

The De La Warr Pavilion was commissioned by the Earl De La Warr who wanted a building for Bexhill in the new ‘International’ style, now known as Modernism. It was designed was by architects Erich Mendelsohn, a refugee from  Germany, and Serge Chermayeff, a Russian working in England. The Pavilion opened on the 12th December 1935.

Earl De La Warr was not alone in his interest in modern design. Philip James, a curator in the NAL in the 1930s, was impressed by printed design seen in Europe which showed the influence of Constructivism and Surrealism and used new techniques like photomontage. In 1936 James founded the NAL’s Jobbing Printing Collection which includes examples of commercial non-book printing such as advertisement proofs, typography specimens and promotional cards. He was interested in work that would ‘catch the eye and stimulate the senses’. Here are a few works from this collection awaiting installation at the De La Warr Pavilion:

Curators from the De La Warr Pavilion had their eyes caught by this proof for a magazine cover for ‘die neue linie’ (the new line) so much that they named their exhibition after it.

‘die neue linie’ was a German lifestyle magazine for women. This is the proof for the cover of the first issue in 1929 which was designed by Moholy-Nagy. It encapsulates some of what was modern in design such as surreal, photomontaged images, lower case lettering (following the Bauhaus rejection of capital letters) and metallic printing ink.

Madam, you sense as we do, that the ‘good old times’ have irretrievably passed, and that a lady does not acquire her ideal from Hollywood. You know that there is a third way, that of the true lady.

The exhibition covers other social and political areas that underwent change in the 1930s. A leaflet from the Bamberger & Hertz clothing shop boycotted by the Nazis shares a case with a Czech booklet promoting trousers as a necessity for women’s emancipation. The case in the image below highlights the expansion in travel, as foreign holidays became more popular and brochures for Egypt and cruises were produced. Day-trips from London (more feasible after the 1938 Holiday Pay Act) were also promoted with a London Underground ‘Party Outings’ leaflet by the designer Theyre Lee-Elliot.

This collaboration between the V&A and De La Warr has provided a great opportunity for NAL objects that were produced to appeal to aspirations to modernity during the 1930s to be displayed in an iconic building born of the same movement.

‘The New Line: Works from the Jobbing Printing Collection’ is open now at the De La Warr Pavilion in Bexhill on Sea until 12 March 2017.

Dear Ms Hibbard, I would like to share a short film I have made about the Bishop Edward King Chapel at Ripon College, Cuddesdon by Niall McLaughlin Architects. They have also designed a lightweight bandstand for the De La Warr Pavilion.