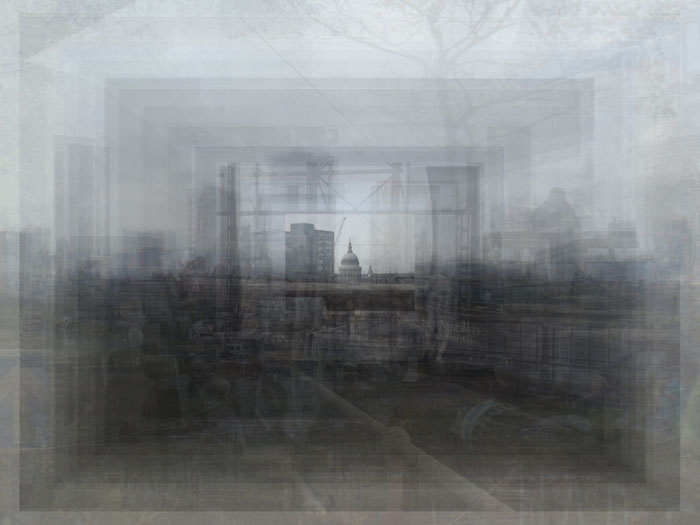 I have been experimenting with using magnifying glasses to project moving images of views onto surfaces, like walls and sheets of paper. These projections are similar in nature to the camera obscura, I like these simple forms of photography, these methods transform the ordinary into compelling cinematic events. With the camera obsura its fascinating to see the outside world projected into a room, to watch the movement of a bus along the floor and see it change speed and shape as it transfers to the wall is captivating.

I have made a view finder box made from wood that houses a magnifying glass, it is a really simple device to make, open at one end, the light from the scene you point it at enters, passes through the magnifying glass, which inverts and projects the scene onto a plastic translucent sheet covering the other end of the box. The focal point of the image can be adjusted by moving the magnifying glass back and forth inside the box.

The scale is really fascinating, I see the results as tiny pieces of cinema, the entire building site and it’s huge machinery is shrunk into an image roughly 12cm square.

I also work with photograms using sun light and do not chemically fix them so the image is always under threat of disappearing altogether. I like creating these images that are reproductions but ones that are not fixed, there is a failure in capturing the scene or object that is being presented to you, you are left with an image which is always on the move.

This is an idea that has been central to many pieces of work I have made, 171 St Paul’s, currently on display in the V&A Architectures galleries, is a moving image piece where a sequence of 171 photographs of St Paul’s Cathedral overlap creating an evolving landscape with the Cathedral’s dome constant at the centre.

View from the Model Room Window 2010-13, is a drawing I made during my British Museum residency, responding to the construction of the World Conservation and Exhibitions Centre. This drawing took three and a half years to complete, it changed with each change that took place on site, each week I would rework the image to collect all the new forms that had emerged.

I have been looking at a few magnifying glasses from the V&A collection, including A.30-1941 used by
Peter Rouw, a highly successful wax modeller who was appointed ‘Sculptor & Modeller of Gems and Cameos to His Majesty’ (George III) in 1807

But the one that interests me the most is not an official V&A object but has been used in the prints and drawings study room for over 30 years. At the moment the windows of the study room are boarded up due to the building works, it would be great to use this magnifying glass to project the image of the outside world into the study room