Inspired by our Alice: Curiouser and Curiouser exhibition, which celebrates the enduring power of Lewis Carroll’s books to inspire creativity, we teamed up with the Creative Team at Reform The Funk, to commission six new animated interpretations of Alice’s Adventures in Wonderland and Through the Looking Glass. Each features original illustration, textures and motion design, and a unique take on the universally recognisable characters, first created by Carroll and illustrator John Tenniel over 160 years ago.

One of the best-loved animated versions of Alice is Walt Disney’s 1951 cartoon classic, with illustrations by Mary Blair, a pioneering woman animator working in Disney’s studio. Disney said, “No story in English literature has intrigued me more than Lewis Carroll’s Alice in Wonderland. [Carroll] was a pace-setter for the motion picture cartoon and the comic strip of today”. Blair’s original artwork for Disney’s film features in the exhibition, alongside Carroll’s original manuscripts, John Tenniel’s illustrations and countless other interpretations of Alice, including works by Salvador Dali and Peter Blake to Vivienne Westwood and Tim Walker.

Each of our animators was paired with one of over 300 different English Language audio recordings of the books, narrated by top actors, from Jodie Comer and Katie Leung to Sheridan Smith and Gemma Arterton, to create a two-minute trip into Wonderland. A huge thank you to all our illustrators, animators, the teams at Reform The Funk and the audio providers, Bolinda Audio, Penguin and Audible. The videos will be posted across our social media channels and added to this blog post, every two weeks, so stay tuned!

First up, it’s A Mad Tea Party by Paolo Russo:

Paolo Russo is a freelance 2D Animator and Storyboard Artist based in Bristol.

“I can’t think of many children’s stories that can trigger our imagination in unique ways such as Lewis Carroll’s novel. For this project, I was definitely partly inspired by the bright colour palette and playful visual style of Maria Bubleva’s illustrations. I wanted to give a twist to the Mad Hatter, and after seeing the version illustrated by Blanche McManus, where the Hatter was wearing multiple hats, the notion that the Mad Hatter would wear a single hat seemed ludicrous. Surely he would wear all of them!”

“I have chosen this style of animation because I wanted it to have a youthful feel. While designing Alice, my goal was to create a character that is a bit more modern, but at the same time, resembles our collective idea of Alice. That’s why I kept some traditional elements such as the colour palette, accessories (the black headband, white socks), and the overall shape of the character. For her facial features, I emphasised the size of her eyes – they represent Alice’s curiosity for the new world across the mirror. To give a more personal spin to her environment, I added some elements typical of the city I was born in. The semicircle windows and the wooden beams on the ceiling are features taken from traditional Venetian architecture.”

Carbon Literacy at the V&A 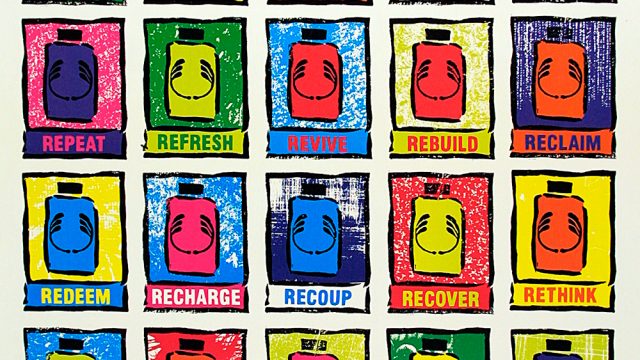