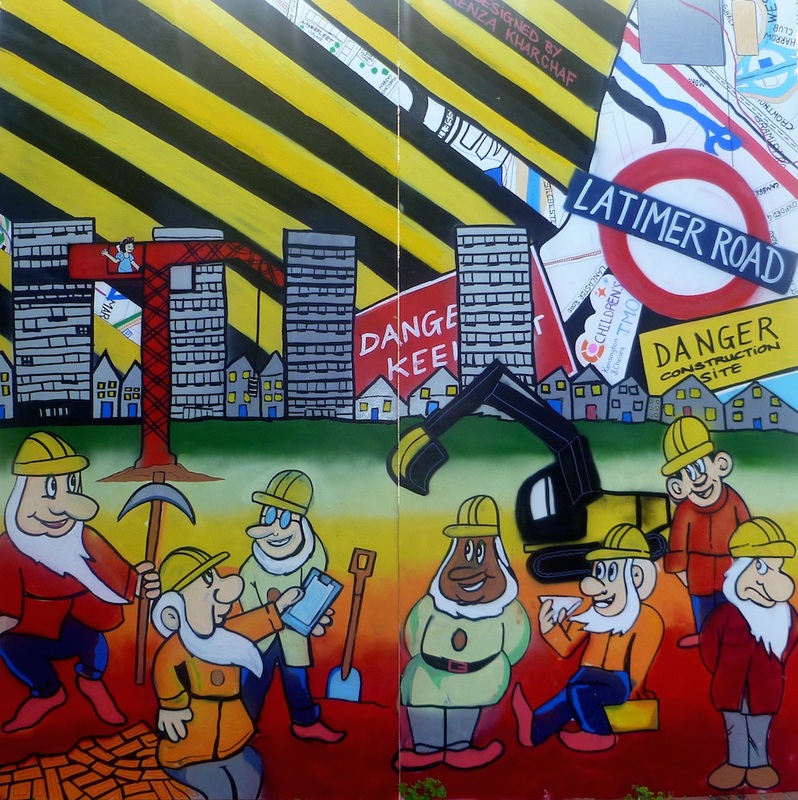 Definitely settled in as Community Artist: collaborating with local art projects, connecting with the V&A collections and mapping out my own artistic concerns.

First off, spray painting at the Henry Dickens Court Community Centre. Local children working with TMO, Steph Perkins and lead artist, Claire Rye, have produced a great picture that will be attached to the hoarding of the building site at More West. It was good to see the design on paper turned into the completed image. Local artist, James Mercer had the amusing idea of incorporating Snow White and the Seven Dwarfs; the building site has a female crane driver who works with an all male crew.

There is never a dull or quiet moment at the studio.
Although I’ve recently been diagnosed with otosclerosis, which is beginning to affect my powers of hearing, I’m constantly alerted to activity at the front of house and back garden. There are daily deliveries to the building site with large trucks stopping outside the flat. Last week, I was chatting to my Tunisian neighbour, Kacim, when a concrete staircase was being delivered. This looked very photogenic and I had to dash off for my camera; hope he didn’t think me rude!

Speaking of photography, I’m grateful to Liz Grant at RIBA for supplying books for my studio. Anyone interested in architectural photography, should check out RIBApix. Looking forward to viewing hard copies in their library.
Natalie Marr from group-work also dropped off a recent publication – Staying Put: An Anti- Gentrification Handbook for Council Estates in London.

The studio I’m based at on 7 Shalfleet Drive is a former council house connected to Silchester Estate. This side of the road will be demolished in January 2015 after the residents have moved into new property at More West. RBKC council and Peabody are providing approximately 120 new homes for rent, shared ownership and sale on the open market.
Two recent discussions I’ve had at my studio, have brought into focus the complex issues around estate regeneration and the affordability of housing. As an artist I’m located at the core of these changes to the built environment, reflecting on the impacts they might have on local residents and the potential they offer for the future development of the area and its communities.

Never a dull moment.
I opened my front door one morning and saw two women in the street. They asked about the new development as they were thinking of buying a flat. Mother and daughter, Sacha and Cecily, were duly invited in and later got to meet, Joanna Sutherland, who is the architect behind More West. They have a historic family connection with nearby Hammersmith. Cecily, the daughter, has rented in North Kensington over the past few years and is looking for a home near the Electric Cinema where she works. They expressed concern about “affordability” as the cheapest housing units to buy are £400,000. How will this also impact on the local area (primarily council estates) and the community being formed around the new housing?
Another discussion: much more heated, not dull.
I had a visit from Edward who lives at nearby Grenfell Tower. He has been involved in a campaign regarding the future of the Tower and the redevelopment of land around the Lancaster West Estate. The latter is providing a new academy and sports centre. His first words to me, roughly paraphrased were: “If you are not for us, then you have no right being here!” Pity the conversation was primarily one way. However I was troubled by the pain and isolation of Edward’s feelings. This is a challenge for a community artist whose funding remit is positive community engagement.
The fab film, Leo The Last, was shot on Testerton Road, before this was demolished for the building of the Lancaster West Estate in the early 1970s. I’m trying to get the BFI to make a copy available for screening as part of my residency. A screening at the estate, followed by a project around housing issues, might be one possible form of engagement.
Maybe I was due a quiet moment.

At the V&A Museum we also find building works for a new gallery space. Kids are splashing about at the courtyard pool. Did I really hear one of my favourite Lee Scratch Perry / Max Romeo songs, Chase The Devil, emanating from the John Madejski Garden? Anyway, I met up with Martin Bastone who took me on a guided tour of the building. Fascinating to learn about its association with WW2 spies. I definitely want to visit the dome and see those panoramic views. Martin had previously assisted me in ensuring my studio was a safe place to work and hold workshops.
I’ve been sketching in the Sacred Silver and Stained Glass Gallery. This is connecting me to Nathaniel Westlake (see previous blog), one of the leading stain glass artists of the 19th century. He had a house built for him a short stroll from where I am based in North Kensington.
Also just around the corner is the historic Harrow Club. This was a former church, built in 1887 by Richard Norman Shaw, who is the subject of an exhibition at the Royal Academy. I’m planning on running a summer workshop at the Club evoking the history of the building and its current use as a vibrant community centre. This will involve local residents and children making “stain glass” images on OHP transparency film and for these to be placed on the windows of the building. The design might collate together stain glass and urban graphic art. There seems to be an interesting visual co-relation between these otherwise sacred and “profane” genres.

I have also been working on some paper models for an architectural themed workshop. I’ve not worked in this format before, so it’s doubly exciting to be able to share new skills and discoveries. There is a RIBA and V&A educational resource that I can dip into. I now need to think about building a panoramic installation for the display of these models. The garden space at the studio will suffice for the moment.
On Saturday 2nd August, I have an Open Studio day. This is from 10-5pm at 7 Shalfleet Drive, W10 6UF. The studio is directly opposite Latimer Road tube station. I will have art on display and info about workshops to be held at the studio and V&A Museum. It would be great to meet more local residents and find out about their experiences. If you would like to visit, please R.S.V.P : cgras@me.com.

I was really interested in the decorated hoarding – we are just looking at having some decoration on a local development hoarding and I just wondered what medium the final images were – it would be great to have some idea of what you did here – if you don’t mind? Great images – thanks