At the April Friday Late, Baroque to the Future, the V&A put on a talk entitled: Sippets and Syllabubs: Eating in Style in Georgian Europe. Held at the National Art Library, any of the lucky 40 members of the public who bagged a seat would have heard of the cook and author Elizabeth Raffald. You would also have been able to view an 1803 edition of Mrs Raffald’s widely successful book ‘The experienced English housekeeper’ as part of the NAL display for the evening.

If you would like to come and take a look for yourself, it is ready upon request from the National Art Library’s special collections.

Obtained by the Library in 1979 this is an 8th edition of the book. Originally printed in 1769, The Experienced English Housekeeper went on to have 13 editions. It also made the author an undeniable success and she remains one of the most celebrated cookery writers of the 18th Century. Hailing from the kitchens of Lady Warburton she went on to open her own confectionary shop, write the first trade directory of Manchester, establish a registry office for domestic servants, and run a coaching inn.

‘The Experienced English Housekeeper’ features many ‘reciepts’ typical of the era. Personal highlights include the ‘Mock Turtle’ made from a calf’s head and the recipe for ‘Transmogrified Pigeons’. It also features a ‘Bride’s Pie’ a savoury pie served at weddings which was a tradition dying out by the 19th century.  Elizabeth Raffald is the first cookery writer to offer the combination of Bride Cake (the precursor of the modern day wedding cake), almond paste and royal icing; a recipe that premiered in the very first edition of this book. 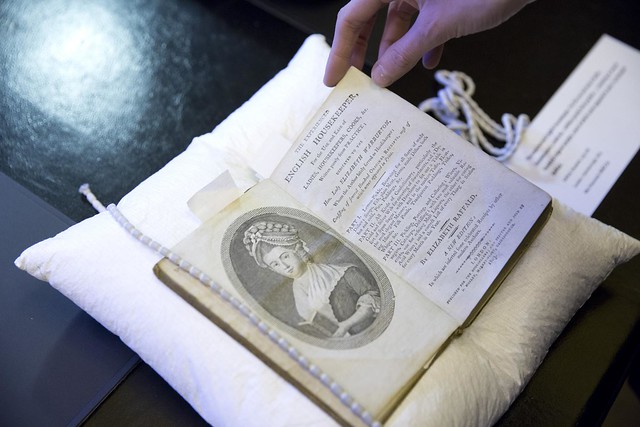 The book itself was praised for being written in plain language, not ‘glossed over with hard names or words of high stile’. It was completely original and Elizabeth sold many of the items of confectionary in her own shop. In her own words, ‘I hope these receipts (written purely from practice) may be of use to young persons who are willing to improve themselves.’ Most of the recipes, if not immediately appealing, are still practical today. Perhaps the braver 21st century cook would like to try and recreate this original Raffald recipe for Lemon Syllabubs:

To a pint of cream put a pint of double refined sugar, the juice of seven lemons, grate the rind of two lemons into a pint of white wine, and half a pint of sack. Then put them into a deep pot, and whisk them for half an hour, put it into glasses the night before you want it: it is better for standing two or three days, but will keep a week if required.

Hi, Very nice, this is very amazing article post. so many peoples like it. thank you so much for publish with us.

Hi, Very nice, this is very amazing article post. so many peoples like it. thank you so much for publish with us.