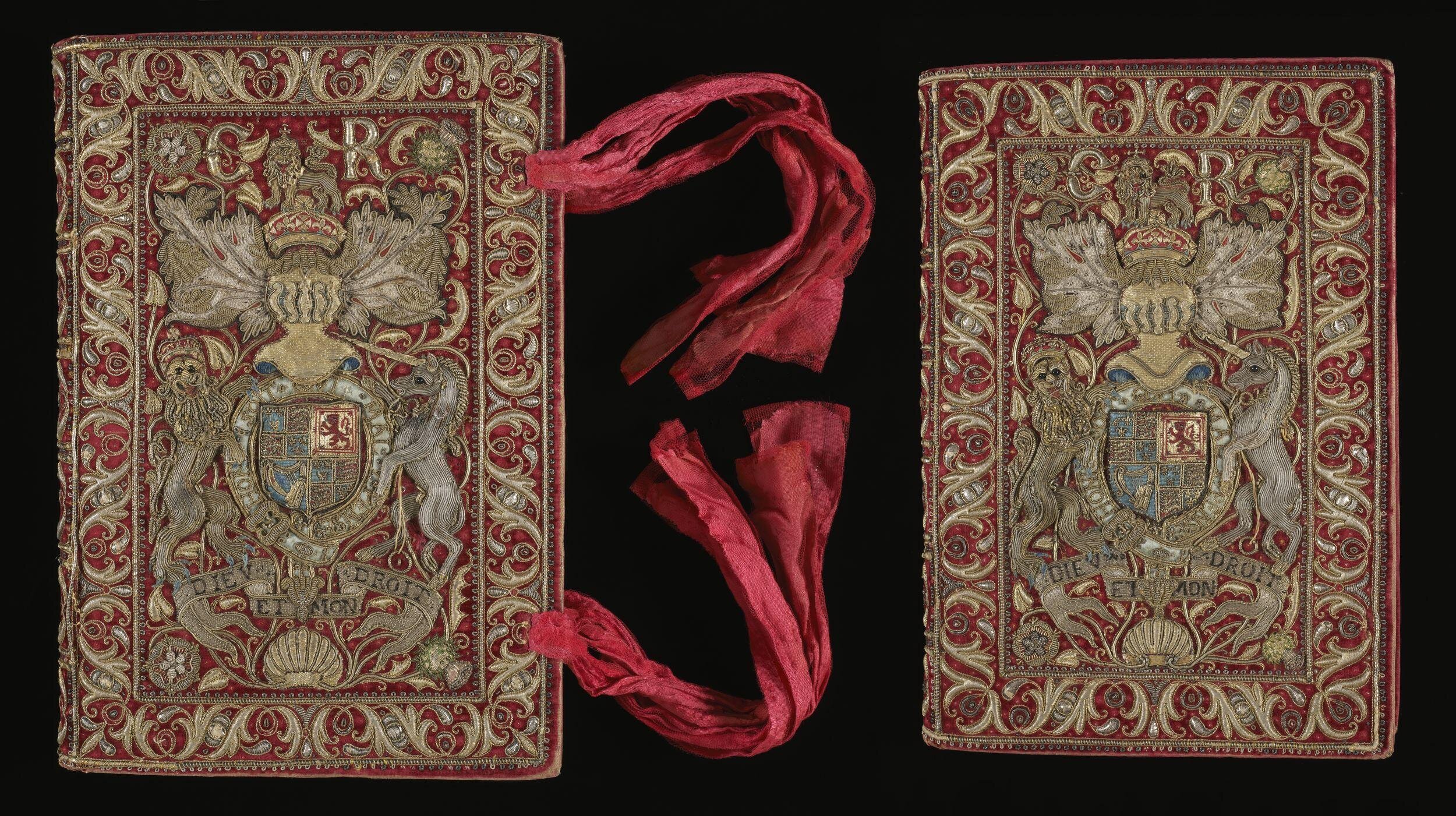 This year, two books covered in magnificent embroidered bindings have been added to the National Art Library collections. This set of two volumes, consisting of a Holy Bible (dated 1632, though actually 1633) and a Book of Common Prayer (1634) was  probably commissioned for the Chapel Royal at Whitehall, which was for the use of the King and his family; they are said to have been gifted by Charles I to Sir Robert Berkeley of Spetchley (1548 – 1656). They remained with the Berkeley family of Spetchley Park (Worcestershire) until 2022 when they were allocated to the V&A, as part of  the Acceptance in Lieu Scheme.

Family bibles were often used to record births and other such important events. Here inscriptions were added to a blank leaf at the end of the Bible recording the marriage of Jane Compton to John Berkeley on 2 October 1773 and the births of their two daughters Catherine and Jane in 1776 and 1777 (see below).

The bindings are of red velvet embroidered with the arms of Charles I: the shield is surrounded by the garter, which refers to the chivalric Order of the Garter, founded by king Edward III in 1348. The garter bears the Order’s motto ‘Honi soit qui mal y pense’, usually translated as ‘shame on anyone who thinks this evil’. The supporters are a lion on one side and a unicorn on the other. The rose of England and the thistle of Scotland feature in the corners and the C and R refer to ‘Carolus Rex’ (Charles King). ‘Dieu et mon droit’ (‘God and my right’), another royal motto appears on a banner below the shield.

The embroidery is attributed to the workshop of the King’s Embroiderer, Edmund Harrison (1590 – 1667) and employs an array of materials and techniques. The virtuosic metal thread work plays with shades of gold and silver, various sizes and shapes of metal threads, different binding arrangements and heights of raised work to create a rich surface. The elaborate embroidery extends to the decorative headbands and footbands, made with crimson silk and metal-wrapped threads. The Bible’s ties are not original, but both volumes did originally have crimson silk ties, most likely decorated with metal threads and gold bobbin lace.

Such sets were not unique and a slightly earlier Book of Common Prayer now at Ham House (Surrey) is similarly embroidered, though on a blue velvet ground (see below). The Spetchley pair, however, stands out because of its unbroken provenance since the time of Charles I, but also for its exceptional condition, so rare especially in bindings of this  size. Its crimson velvet is still vibrant, its pile warp unworn, and the embroidery largely intact.

Politics played through gifts was common currency under Charles I, and such bindings have a symbolism and meaning that goes beyond their decorative craft. They offer a glimpse into the mechanisms of royal patronage and the Caroline court, while enhancing our understanding and appreciation of the seminal texts they were conceived to glorify.

To share the beauty of these books with as wide an audience as possible, the Spetchley Book of Common Prayer was put on display in our British Galleries last week (Gallery 56). It was placed on a lectern lined with a cushion custom-made by our colleagues in Textile Conservation to gently cradle the richly embroidered surface of the book’s cover. It was a very exciting morning for Kate Fielder (pictured below), currently an apprentice in the library, as she helped with the installation of the book in the case. Do make sure to pay a visit to this very special book in Gallery 56 when you next come to the Museum!

The ‘Spetchley Bindings’ are now part of the National Art Library collections, which celebrate all aspects of the art of the book. The Library is open to all and free to join. For further details, see our website.

For more images of these books, see our collections pages.