The V&A, University of the Arts, London and David Bowie’s former school, Ravens Wood School, South Bromley, have been working together on a film since January 2013. This interdisciplinary project engaged students in David Bowie’s music, performance and art and imagined his influence on present day students at the school. You can find previous blog posts on the project and workshops which detail it each step of the way: from setting up the project and visiting the exhibition to a short article by Robert Worby, producer of the music the students have composed, where he shares his experiences of listening to Bowie and using some of Brian Eno’s creative recording techniques to develop the sound.

Saturday 18 May 2013: It’s the Ravens Wood students’ exam year and so the decision to film at the weekend became inevitable when everyone’s diaries were compared. Ironically, the empty corridors of the school add a real sense of eeriness to the scenes that will be filmed today. I don’t want to give too many things away about the story but, the opening wide shots that are filmed of Dominic Grimshaw leaning against the tennis court’s fence are partially the result of the playing fields being too full of happy cricket-playing youngsters. That’s far too jolly and positive a scene for our opening so the crew have to quickly find an alternative…it’s a good early lesson in improvisation. 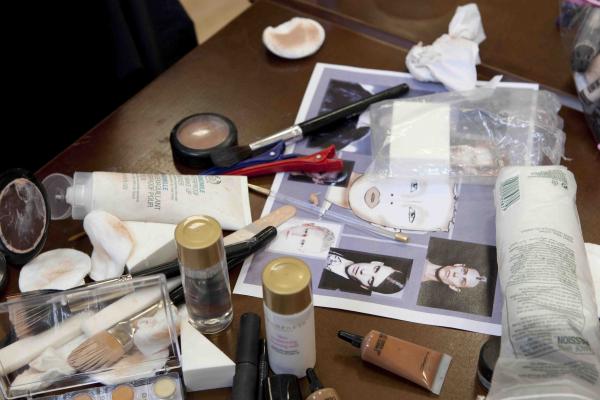 The team from University of the Arts, London: Caroline Stevenson (Producer of the film), Luke Craggs (Creative Director and story-boarder), Nayl Majid (Costumes), Laura Yandell (Head of Dance and Drama at the school), Mel Ward (Dance Teacher) and I arrive at the school at 8.30. A small group of the dancers are also here and by 10.00, the drama studio has been re-fitted with black drapes over the white backdrop and lanterns are re-hung and patched by James Hughesdon, a lighting designer who has come in specially to support the group. Jackie McManus from UAL has provided copious quantities of much-needed sandwiches, drinks and chocolate and the amazing costumes, all sourced and hand-sewn by Nayl, have been laid out in the changing/make-up rooms in order of size as each student has at least two costume changes throughout filming. Make-up stations have been set up as Luke briefs the make-up artists Amelia Quinn, Claire De Graft, Domenica Simpson (designer of the ‘look’ of the make-up) and Gina Fitt . By 11.00, Mel is warming up the dancers. A rough sound-mix of the song will be played in the drama studio during filming so that their movements fit the rhythm, but the actual track is yet to be mixed by Robert Worby and will be added to the film later.  The film company, ‘3 Angry Men’ have also arrived: James Dunlop, Adam Hobbs, Aaron Young, Siena Bevan and Sabrina Capes and proceed to set up their equipment…

On the cusp of their twenty-fifth year together as a band, Charlie Watts, drummer with the Rolling Stones, was asked to muse on his experience:

‘Five years’ work; twenty years’ ‘anging about…’ was his summary.

I was reminded of this quote throughout the day.

Actually, that’s not quite true. Caroline, Luke and the film company have spent a lot of time carefully storyboarding the film and talking through ideas so that no time is wasted. There is the inevitable set-up time though between each shot and the students, gathered next to the drama studio in hair and make-up, have to get used to being silent when filming takes place. This happens in short bursts and I’m really impressed with how well the group cope with this change of energy throughout the day. 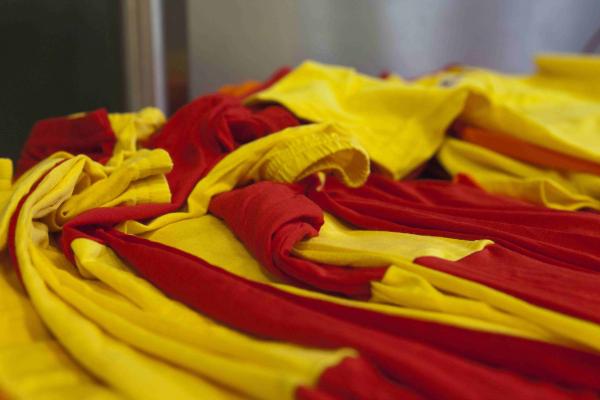 James directs the students very professionally. He’s calm, supportive and talks them carefully through what is about to be filmed, the final effect it is to have, how it fits in with the story and how it may be altered in post-production. Dominic Grimshaw has a key role in the film and takes direction excellently. He has to spend a lot of time standing very still, staring down the camera whilst the crew focus, change lenses, lights, sets up tape marks on the floor for him to line up with and put down dolly tracks for the shots that need to glide smoothly. There are few, if any, re-takes because of mistakes. There are multiple versions of scenes filmed though, where time allows, so that there are options and alternatives to use back at the studio when the film is edited.

One of the most difficult sequences is left until the afternoon. Again, I don’t want to pre-empt the final effect. Suffice it to say that the dancers have worked extremely hard and have probably heard enough of the song to haunt them for a very long time to come…

The next stage is to edit the film, add in extra footage, ambient sound, music and any special effects. I think there are a few visual effects that will be very special indeed.

To some extent, until the final film is put together, this is the end of our practical work. I look forward to welcoming the group and our guests to the screening of the film at the V&A on 17 July.