Recently I caught up with artist Leila Johnston, who’s the first Digital Art Curator at Sheffield’s Site Gallery and has been digital artist-in-residence at a number of organisations, including leading dance company Rambert, the Helsinki Museums, the Derby Quad, and many more. She’s also one of the Tomorrow’s World presenters, and has been a podcaster and writer for over a decade. 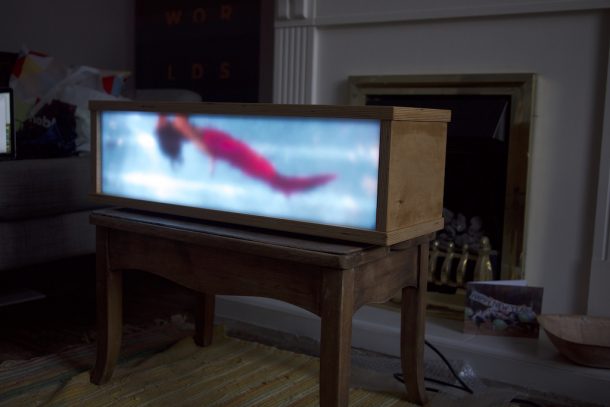 Hello Leila! We’ve known each other for a long time, in various guises, and I’m really interested to learn about your time as the Digital Curator at the Site Gallery, especially now that the building has re-opened. Could you tell us about your recent experiences?

The Digital Curator position was pitched as part of a City of Ideas funding bid, with the intention of stimulating interdisciplinary cultural discussion within Sheffield. The then-Artistic Director, Laura Sillars, named me on the bid from the start, as she had followed my work since I was a ‘Technologist in Residence’ on the Happenstance Project at Site in 2012. She had been a great supporter of my magnum opus, Hack Circus , and wanted to bring a bit of that vibe to Site. From my perspective, it’s great to have a close working relationship with a special arts organisation like Site at such a critical point in its development.

The gallery building was closing for redevelopment just as my curator job took hold, so a big part of my remit as Digital Curator was to keep the programme alive while we didn’t have a building. At the time of writing, the building is reopening imminently, three times the size with a huge new exhibition space.

Since early 2017, my job has involved creating regular events at different locations around Sheffield. We’ve called these ‘Site Sessions’, and they’ve given me the opportunity to invite a range of talent to come together, including digital, visual, audio and dance artists, technologists and scientists, editors, curators and producers, and this autumn – magicians, hypnotists, improvisors and anthropologists for our ‘Magic and Technology’ season. As with most curators, I suspect, I’ve used these events as an opportunity to indulge my personal fascinations. But I find that if I’m interested, other people usually are, too.

Last year you kindly invited me to speak at a Site Gallery session on the subject of AI and creativity, during a period when the museum was being refurbished. What did you learn from running those offsite sessions? Was it hard to keep people aware of the rebuilding of the gallery?

In general, I think most people coming to a Site-branded event were aware that we were closed, and the building had signage indicating we would be reopening in September. I often included a slide of the architects’ drawings in my intro to the events, and told people to head over to see what was going on. The Site team made a concerted effort to share what was going on via social media, too.

We had a slightly different crowd come to the event you spoke at, as we partnered up with the Workstation’s regular ‘Platform’ mingle for that one – so there were business and AI-related people there, and perhaps a slightly fewer of the gallery events regulars. Actually, that was the big advantage of the events: we were able to reach new audiences who might not have heard of Site, let alone consider going to a talk in a gallery space. But having left the hallowed space and gone out to create work in different spaces, we’re on their radar. Every event was held at a different venue, so the new contacts we’ve made with venues have been great, too, even if at the time it was a bit stressful to find new places for events every month! 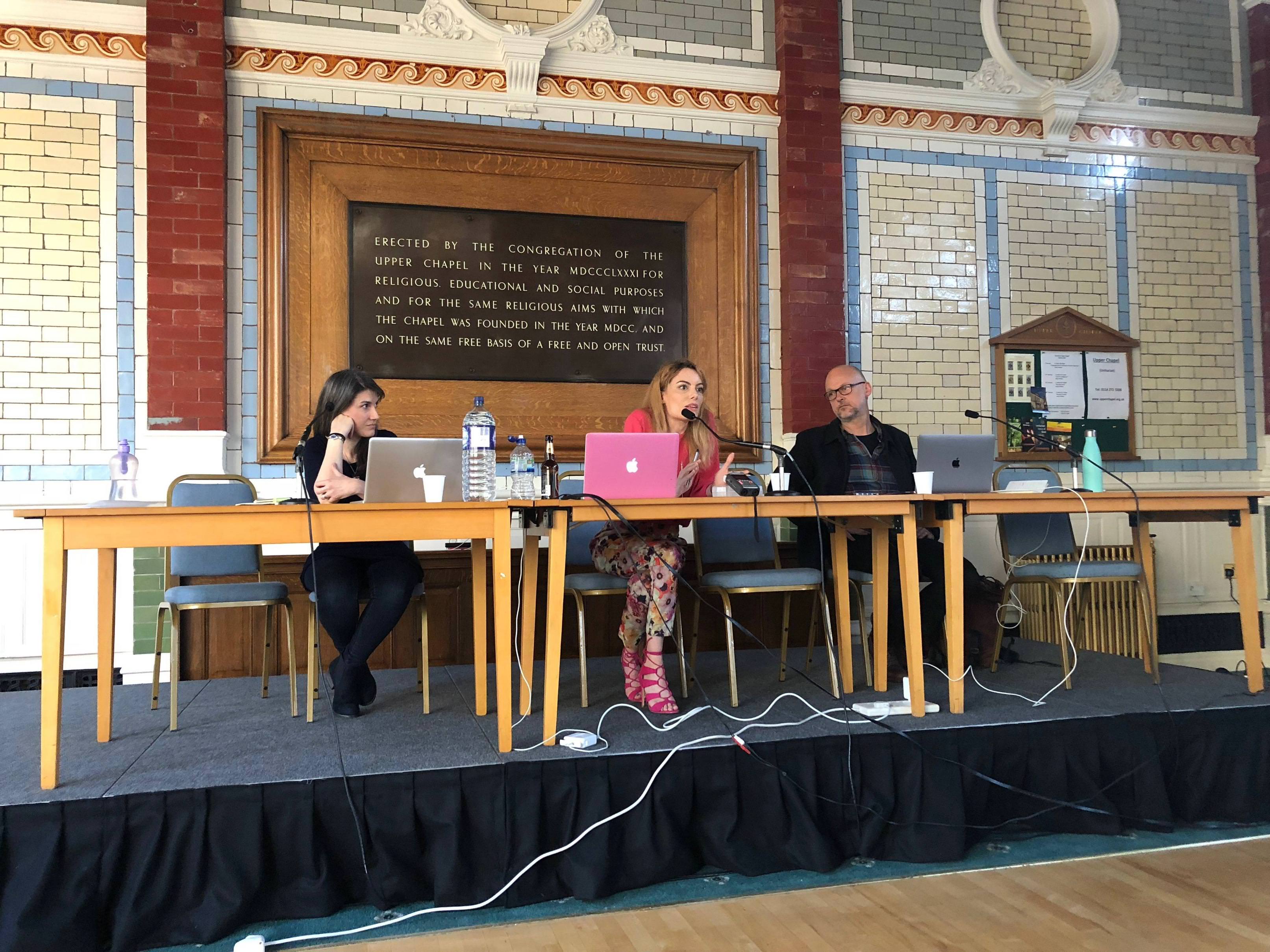 How was it, to prepare for the re-opening?

It’s been extremely busy! We’re a very small team, but I have been working for Site on and off for six years and I have noticed that despite all the changes it still, somehow, really feels like Site.

Just on a practical level, we have so much more space now. The new building has offices on top, and where there used to be a wall to the outside, the corridor now just magically continues, this infinite white tunnel. I feel like I’m Jeff Bridges at the end of Tron every time I go to a staff meeting. It’s been even more dramatic for the staff who are in all the time, with noisy, messy work going on non-stop for almost two years.

It seems completely unreal though, there has been such a big run-up. And now we need to change gear, mentally, from run-up to running smoothly, without pausing take stock. I think we’re all secretly amazed that it’s actually happened, and terrified that if we think about it too much the spell will break and the building will just evaporate.

Changing the subject a little, at the Site Gallery session event last year I suggested that AI needs Art as a means to express what it’s going through, and to contextualise itself. How do you think AI has met with digital art?

Yes, I love your idea that AI will need to understand and create its own art, if it’s to safeguard its mental health after realising its own consciousness. The serious point is, I think, that the people who most enjoy pontificating about future sentient minds seem to place hardly any serious focus on the emotional motivations that actually govern existence. The whole discipline is being conducted within the psychopathy of privilege. I don’t believe ‘real’ AI is a danger at all. In fact, I consider lengthy discussion of it to be nothing more than a silly parlour game for older, educated white guys. With so many real dangers to so many people in the world right now, I find it most of the chat about AI outright offensive. As Kate Crawford said in the NY Times recently, if you don’t have any other threats in your life, I’m sure an imaginary apex predator is worth discussing. But for the vast majority of people it is, at best, bafflingly irrelevant.

‘The AI conversation’ is a useful analogy for human relationships, though. We are terrible at understanding one another, and historically find the idea of understanding a machine less threatening. Thinking about interacting with AI might be a gateway to thinking about people who are different. This Aeon piece is a good primer on these ideas. I couldn’t care less about AI as a science fantasy thing, but I think it’s a tool we can embrace to train us, somehow, about inter-human empathy. That’s where we’ll find it most immediately useful, and that’s where artists come in. The AI conversations need to include, and be started by, artists. Artists are not there to translate someone else’s truth, nor as handy illustrators or disseminators of computer science theories.

Of course, there are some really interesting projects involving AI technologies and themes, but my favourites are the ones that have something to say about what it is to be a person, and what it is to be alive. I mean, these are the issues we are nowhere near understanding. It’s an obvious and rather childish distraction to jump straight to distant impossibilities when we haven’t even worked ourselves out, first. I think it’s our responsibility as artists to push back, constantly and forcefully, on the idea we are in the service of the sciences, and put our energy into owning our part of this conversation.

Absolute pleasure to be back at Rambert tonight getting creative with dancers again. Lots of brilliant positive people, and I was *totally* inspired by the way Artemis brought so much life and joy to the challenge of 360 filming while dancing! Delighted with the results. Thank you @lil_ballerina18 @ms_stackhouse @nancynerantzi @rambertdance & everyone! I will email soon with the files 💛💪

You’ve worked on a number of interesting residencies, from Rambert, Hack Circus to Finnish museums, could you tell us some more about your experiences outside of the Site Gallery?

I moved to Sheffield to do a residency here, back in 2012. The following year I launched Hack Circus, bringing together people and ideas from the arts and sciences in a kind of lawless collective that produced a quarterly magazine and regular immersive live shows for three years. The last proper Hack Circus event was a musical journey into the underworld, with talks from experts performing within the story world.

In 2015, I started making and pitching more of my own things, including a weird multimedia ‘Life Extension Booth’ with the technical help of my friends Saul Cozens and James Jefferies. Saul and I took it to the Brighton Digital Festival, where it was commissioned as the New Work Award, and the Brighton Digital Festival. The experience was funny and quite bleak: the participant was a volunteer in a medical trial for the mysterious organisation M.O.R.T.Y: ‘A Cure For Life’. Needless to say, it didn’t end well for the participant. I made a documentary, too, which people watched in the ‘waiting room’ area.

I’ve worked with dancers since my residency at Rambert culminated with an LED/Pi installation at the Lowry (2016 – 17), which was really exciting. Dancers are so smart and great to work with, and I always feel like I want to give something back when I’m around them. So a lot of my work with them has been about empowering them to use new tech and make their own amazing stuff with it. The notion of parachuting a tech in to solve problems is horrible, and unfortunately does extend to these art-tech collabs, but it’s always seemed to me that dance, as an ancient and successful expression, has already solved most of its problems. It needs tech a lot less than tech needs it.

I’ve recently finished a residency with an arts org called Access Space in Sheffield, which culminated in a new kind of Hack Circus event on October 4th. Thanks to advanced holographic technology, I’m concurrently in residence at the Derby Quad, with an exhibition opening in November. There will be LEDs, dance and ritual, and some new ideas about virtual reality.

The last time we met up you were headed off to a hack day at Rambert, armed with a 360 camera, how did that go?

It was magical! Rambert runs monthly, after-hours ‘Playground’ events, where their creative friends, including loads of dancers, choreographers and photographers turn up and experiment together. It’s always a joy to watch expert creatives at work. I gave one of the dancers my 360 camera on the end of an extending pole, and the footage that came off it was glorious. You can have a look at some of the results on my instagram.

The Site Gallery re-opened on the 28th September 2018, take a look.