On the outskirts of Bandung, up on the hills, there is Lawangwangi Creative Space, a gallery and restaurant surrounded by beautiful gardens, mountains and spectacular views of the city of Bandung.

Lawangwangi is the host for this year’s Digital Design Weekend, the Indonesian edition, which was first presented in Jakarta last year thanks to the support of the British Council. A prestigious university town, as well as the home of Institute of Technology and a design hub, makes Bandung a great location for the Digital Design Weekend. This year’s event had a focus on sound and environment, with participating artists presenting installations, collaborative projects, performances, workshops and tours.

Soon after arriving in Bandung, I join artists Robbie Thomson from Glasgow and Abshar Platisza from Bandung at the Institut Teknologi Bandung to discuss their collaboration and open lab. This is the first time Robbie and Abshar develop work in collaboration with another artist and also the first time they work with an open studio format, sharing their work in progress with students, faculty members at ITB as well as the public. Both artists are interested in science and technology and they have been working with different media, from robotics and animatronics to bacteria, animation and sound, exploring links between bacterial behaviour and algorithms, dystopian worlds inspired by the work of JG Ballard, environmental issues and the use of microorganisms as biological weapons. In relation to the latter, they mention the story of WWII artificial contamination on Gruinard Island, off the west coast of Scotland, as a result of tests of a biological warfare bomb containing live anthrax spores; to quote Robbie “an example that hinted at a possible deeper narrative of human manipulation of biology and it’s wider social implications. It’s a powerful and sublime image that feels like it has grown from the pages of science fiction: a remote island commandeered by military-industrial powers and contaminated by a dark, living, invisible threat that made it uninhabitable for half a century.”

Tomy Herseta, a young artist from Bandung who I had met in a previous visit to Indonesia, will join Robbie and Abshar in a collective performance on the last day of the Digital Design Weekend bringing together animatronics, bacteria, sound and animation. Tomy works with sound with a speculative design approach, and Extinct Frequencies, the work presented at Lawangwangi, brings us into a soundscape from a dystopian future where nature has deteriorated to a stage that all we are left with is artificial things. Sounds we find in nature today, are no longer part of Tomy’s future soundscape, 20-30 years from now.

In last year’s Digital Design Weekend Jakarta, Invisible Flock from Leeds and Miebi Sikoki (Digital Nativ) presented their first collaboration, Someone come find me; an installation involving a nautical buoy in the sea receiving messages and private thoughts by people for someone far away. The messages were translated by the buoy and flashed out to sea in morse code visible for miles away.

Less than 2 weeks before the Bandung event, the artists met again, this time to take a 48,000 kms journey from Java to Flores collecting water, sounds, plant biodata, soil, lava and other samples in order to capture and highlight the changing fragile landscapes at the forefront of climate change. Their installation at the Digital Design Weekend creates a mapping of these dramatic and extreme environments, allowing visitors to encounter and explore these eroding ecosystems; dead bleached corals, plants generating electrical signals, seismic patterns in lava are part of their new collaborative sensory environment Nada Bumi (Earth Tones) – an ecological reading of our world.  Nada Bumi and their journey is collected in a beautiful travel diary.

As these collaborations are already underway, Biome Collective from Dundee and Sembilan Matahari from Bandung will be meeting for the first time at the start of the weekend for their exchange and collaborative work that will continue over the next ten days. Both groups work with tech, video mapping and public interaction and during the event visitors will meet them while developing the first stage of their exchange.

Many more projects explore sound and present exciting work from across Bandung, such as BottleSmoker, who are using a range of household objects, including sewing machines, glasses, bells, cabinets and loads more, but also instruments and sounds from different areas of Indonesia creating intriguing sounds and music. There is also a pop up Hompila, an annual festival for kids by Manaswara, which was initiated by parents and kids, a great outdoor event where kids can learn to create, compose and play music together.

Other participants include Bandung’s established electronic group HMGNC (Homogenic); research and development company Labtek Indie, who are also the local partner for the DDW, run machine learning and coding workshops; as well as Notanlab, a local studio sharing a new prototype and inviting visitors to help them in the next part of their process. Finally, young artist and composer Etza Meisyara, a recipient of this year’s Bandung Contemporary Art Awards for her recent work How Does It Feel? (To be a refugee), developed after recordings and conversations with refugees during her journey through Europe. Many of the artists here have been creating music with Kuassa‘s guitar amp and mixing software, which has a big market and following in the UK. The Kuassa team is at the Digital Design Weekend to demonstrate their software and take part in conversations.

The Digital Design Weekend remix edition in Indonesia is a brilliant opportunity for showcasing new talent from both Indonesia and the UK, but also a valuable exchange and collaboration between the two countries, led and supported by the British Council, bringing together artists, designers, makers,  curators and technologists over the past two years.  Now, let’s hope we can share some of these great projects back in London next year! 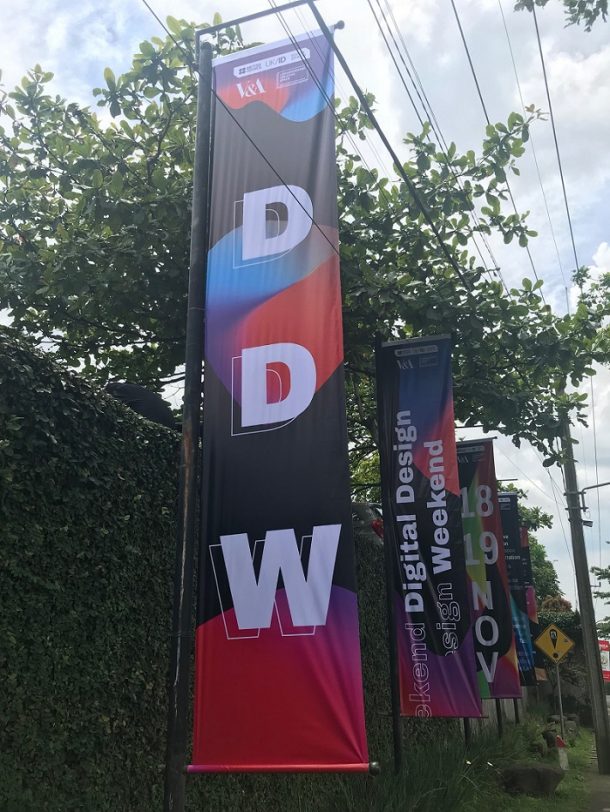