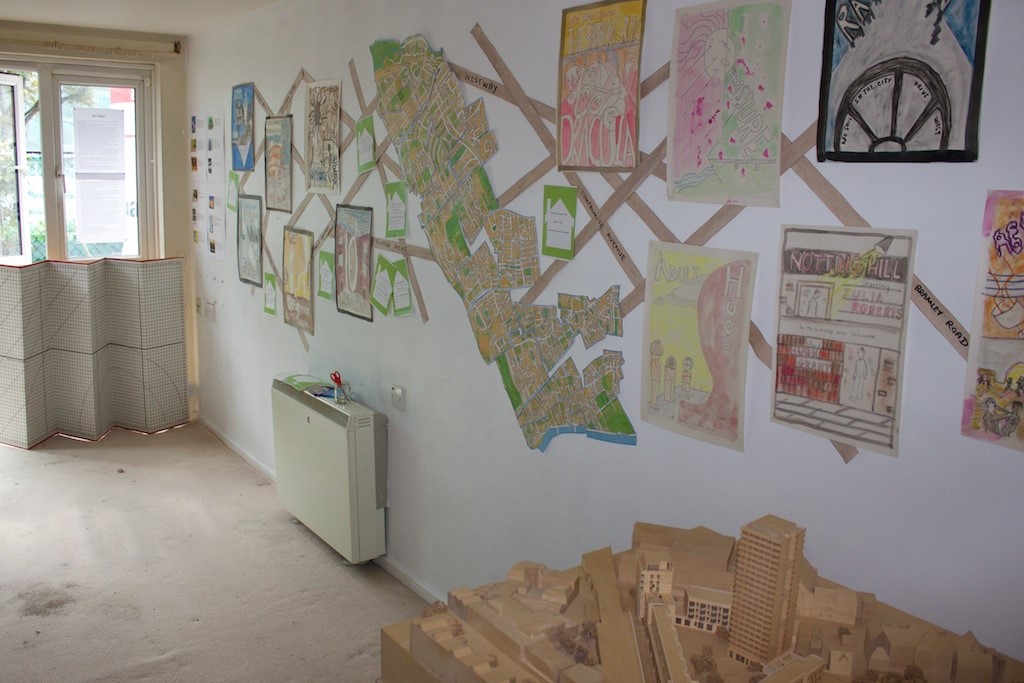 My studio is a 1966 council flat that has no domestic furnishings. I invited visitors to bring an object from home and to tell me a story.
Many thanks to visitors and participants in No Object. You brought my studio to life for a day with your stories about a milk and marmalade pot, harmonica, Big Ted, Aboriginal art and 8mm projector.
Together we made the film, No Object.

Nahid, Silchester estate resident: “Amazing insight to the area I’ve been living in for over 30 years.”
Neil Hobbs: “What a wonderful project. I hope this is happening all over London. If not, why not? This social history is so very important and should be recorded.”
Lucilla Nitto, photographer and W10 resident: “Very interesting mix of space and art. Well done!”

No Object was held as part of the Portobello Film Festival and consisted of:

The gritty streets and houses of North Kensington have attracted film makers since the 1950s.
In The Blue Lamp (1950) a classic cops and robbers car chase along Ladbroke Grove ends with a car crash near Latimer Road.
In the following year, Ealing Studios, provided a neat comic variation to the chase. In The Lavender Hill Mob, two police cars crash at the juncture of Bramley Road and Latimer Road outside the Bramley Arms. Their car radio antenna become entwined. The resulting incongruous broadcast of “Old Macdonald had a farm and on this farm he had a pig” resonates deeply with the history of the area, noted for its pig farming in the 19th century.
This part of the Hill is known locally as Notting Barns or Dale. It consolidated its seedy reputation as a “slum” with four days of race riots in 1958. Ethnic tension would feature in Sapphire (1959) with a scene directly culled from press accounts of the riots. A black suspect is chased by the law from a club in Shepherds Bush and is assaulted by Teddy Boys in Notting Dale. He is saved by the actions of a local grocer woman. Fact made fiction.
The race riots provided a poetic framework for the book Absolute Beginners (1959) written by Colin MacInnes. In this seminal novel about the youth culture of the day, the writer had this to say about the area:
“A long, lean road called Latimer road which I particularly want you to remember, because out of this road, like horrible tits dangling from a lean old sow, there hang a whole festoon of what I think must really be the sinisterest highways in our city, well, just listen to their names: Blechynden, Silchester, Walmer, Testerton and Bramley……….and there’s only one thing to do with them, absolutely one, which is to pull them down till not a one’s left standing up.”
This was a prophetic statement as the houses and streets were all torn down for the building of the Westway (A40) and council estates in the 1960s.
A musical adaption of Absolute Beginners was made in 1986 featuring David Bowie.
Kitchen sink dramas of the 1960s would also tap into the poverty and housing inequalities of the area.
When Bette Davis visits run down Walmer Road in the 1965 film Nanny, she discovers her estranged daughter is dead. A result of a back street abortion gone horribly wrong. This pushes her character over the gothic edge. Far more sinister happenings would take place at nearby 10 Rillington Place. John Christie, the serial killer, would offer deadly medical assistance to vulnerable women. The late Richard Attenborough powerfully conveyed Christie in the 1971 film version of the case.
With the building of the Westway and the estates, new possibilities for filming road sequences would appear.
When Hammer made The Satanic Rites of Dracula (1972), it seemed fitting that they should use the redeveloped Bard Road, just off Freston Road (formerly Latimer Road). This was and is a dead end road behind the Harrow Club. In the film, two biking Hells Angels trail a secret service woman and kidnap her at this point of no return.
Radio On (1979) came out of left field. A black and white film about alienation and featuring the modern existential drive. Not at street level, but above on the turbo charged Westway.
Adulthood made in 2008 by a new class of film maker, Noel Clarke, captures all the angst of life on an imaginary estate. The culture of young people who are trapped in the vicious cycle of gang crime. The police from The Blue Lamp are nowhere to be trusted or respected. The bad guys are the good guys you root for. The film uses locations in North Kensington that could be located in Silchester or Lancaster West Estate; these stand on either side of Bramley Road and Latimer Tube Station.
This council flat at 7 Shalfleet Drive is part of the 40 year old Silchester estate. It will be demolished in January 2015 to make way for mixed-tenure housing. As resident artist based here, I will be making a film project about the new housing development and the new community that is forming here.
Looking to the future, I wonder what films will be made in this area over the next 50 years.
Will they replay good cops, bad cops?
Will poverty and housing issues still feature?
Will more diverse multi-cultural voices be heard?
Will there be estates dominated by a new middle-class criminal?
Will the narrative film form, the staple of generations, become obsolete in the new social media age?

Leo The Last is the definitive local film that resonates with the themes of my residency: housing, architecture, film.
Leo The Last was directed by John Boorman in 1969, between his Hollywood films, Point Blank and Deliverance.
The story concerns a European aristocratic landlord who moves into a slum area of Notting Hill and becomes radicalised by his oppressed West Indian residents.
The film is an experimental adaption of a stage play and Boorman chose the location because of family links with the area. Uniquely, the design team were able to use a local road, Testerton Street, prior to its regeneration into the Lancaster West Estate. Nearly all of the residents had been moved out and Boorman was able to paint all the houses and road black. This created the unique monochrome colour palette in the film. A false house was built across Testerton Street. This was the stuccoed white house for the central character.
In the archive, I came across the touching story of one couple, still living on the road at No 27 and waiting to be rehoused. Arthur and Grace Clark refused the offer of £50 to have their terrace house sprayed black.
“We could do with the money really,” said Mrs Clark, who had lived all her life in the house. “But if we agreed to let them paint our house, the vandals would get busy, as they would think it’s empty.”

I am working with the V&A Museum to screen the film for residents at Silchester and Lancaster West Estate. They will then help me to make a ceramic installation based on images from the film.