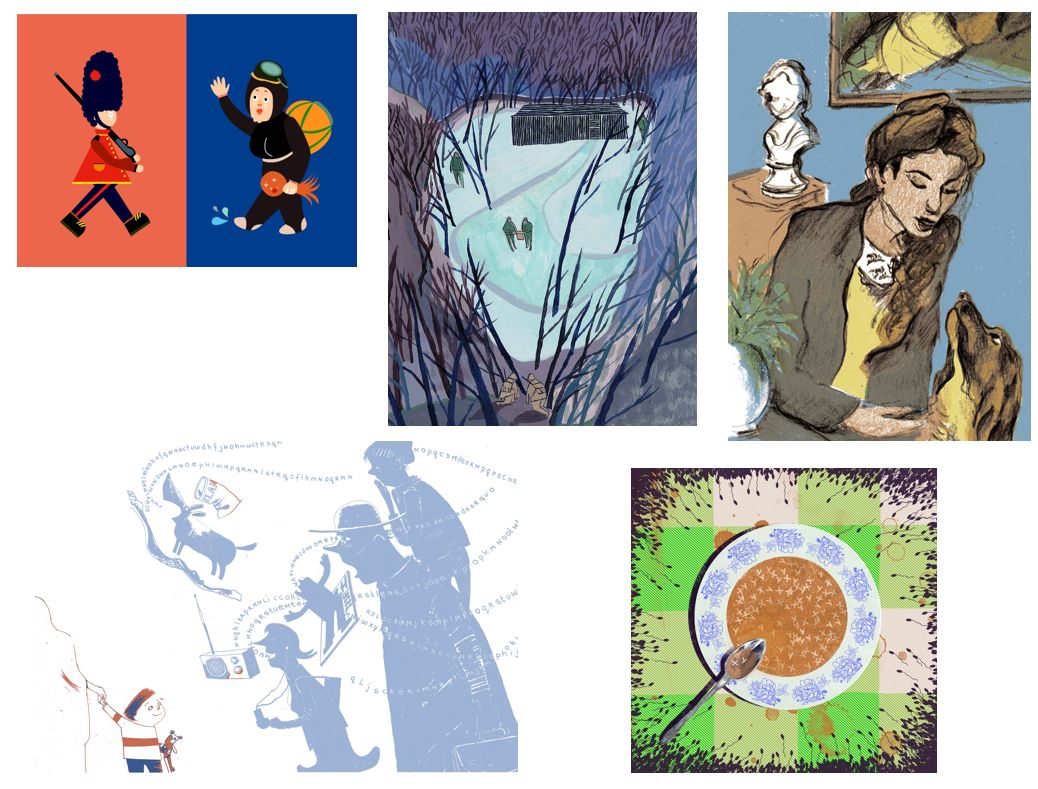 It’s an enduring mystery of art competitions: what exactly do the judges want? As the shortlist for the V&A Illustration Awards is announced, I caught up with the judges of the Student Prize, Rafi Romaya & Ruth Prickett, & quizzed them on their choices, trends in illustration & their views on why Student Competitions matter.

Rafi Romaya is an award-winning designer and Art Director at Canongate Books, where she has commissioned emerging and established illustrators to design some of the most iconic book covers of the last decade, including Michel Faber’s The Book of Strange New Things and Matt Haig’s A Boy Called Christmas.

Ruth Prickett is Editor of Illustration Magazine, a quarterly publication showcasing the very best of contemporary and historical illustration and graphic design. She has long championed student illustration in the “Graduate Roundup” section of her magazine and is herself a collector of antiquarian and finely illustrated books.

Q. Rafi and Ruth, in drawing up a shortlist, you’ve had to whittle down hundreds of entries to the best 5. But what makes a ‘good’ illustration and, in judging an illustration competition, what makes one illustration better than another?

Rafi Romaya For me a great illustrator takes ownership of their craft to create an individual style that draws the viewer in and leaves a lasting impression. In the way you can remember the first time you hear a great song, the viewer should remember the first time they saw that particular book jacket/poster so it becomes synonymous with the work, and creates an iconic image.

Ruth Prickett The best illustrations show some kind of individual identity of style, something that is so hard to define, but so obvious when you see it. Sometimes the appeal is technical excellence, however this only takes an illustration so far and cannot make up for lack of originality. The illustrations we selected are all technically skilful in different media. Some, such as Han Bit’s bold graphics, are superficially simple, yet, this sort of simplicity is often difficult to achieve

Q. To what extent have your backgrounds suited you to judging this competition?

Rafi Romaya I’ve been lucky enough to have worked with some hugely talented illustrators over the years, from Yehrin Tong to, most recently, Jeff Fisher, who also won the awards in 1989. When commissioning I’m looking for a collaborator and someone who can adapt their style to a brief if need be. Often it’s just a detail in someone’s work I notice, then try to explore or take further.

Ruth Prickett As Editor of Illustration, I see thousands of illustrations each year, some produced by established illustrators in glossy picture books, some in student exhibitions and some created over many years by our interviewees. I also have a personal collection of illustrated books covering more than 200 years of illustration. , however I have always made an effort not to choose subjects or illustrators to feature in the magazine purely on the grounds of whether I happen to “like” them.

Q. You’ve had to create a shortlist of 5 from over 300 entries. How did you go about this and what is it about these 5 entries that distinguishes them from the others?

Ruth Prickett We both went through all the work alone and selected 15 for our own personal shortlists. We then compared our choices and found that about 10 had been chosen by both of us. It was interesting that Rafi and I independently highlighted many of the same illustrations. This overlap gave us a good starting point for further discussion, since it showed us that we both believed these images had something arresting that made them jump out of the (very large) crowd.

Rafi Romaya We were aware that we were judging people right at the beginning of what we hope will be long and rewarding careers so in the first instance we were looking for potential and work that jumped out and spoke to us. Kate Milner’s expressive characters do this with the most delicate use of line, shape and colour palette. We were also looking for illustrators with a certain level of technical ability, their own voice and who could lend their styles to different genres, which can be vital to maintaining a long career.

Ruth Prickett Of course everyone is free to enjoy what they like. However, competitions highlight work that a few people at a particular moment in time have considered the best of a defined group of entries. The point is to highlight talent and promise regardless of the likelihood that that person will become and remain famous or even “popular”. If it brings them to the attention of potential employers and the general viewing public then so much the better.

Rafi Romaya Most illustrators are working brief-to-brief and it can be a very solitary way of working. Competitions are important as they can offer a chance to get your work shown to a wider audience and can give you the opportunity to shine amongst your peers. Being part of something like the V&A awards can transform your career and put you on the world stage. As well as the prestige, it helps in a very practical way with a substantial cash prize to give you financial space to create your own work and showcase it.

Q. Ploughing through hundreds of Student Illustrations from Britain’s art schools, what can you say about the quality of the entries and the state of Art Education today?

Ruth Prickett I know people always say this about competitions, but there really were some fantastic entries in the student category and the title “student” certainly shouldn’t be taken to mean “not as good as a published illustrator” but merely one who still happens to be studying and, I imagine, experimenting and improving. It’s great to see so many different styles and media and also to see that British art schools are attracting so many students from around the world, each with their own set of influences and cultural backgrounds.

Rafi Romaya There is some great work being produced all over the country and the standard of entries was incredibly high. Joan Alturo, for example showed an ability to capture a complex concept in a clever bit of execution. We didn’t look at which college or university the illustrator came from, but after we compiled our shortlist we realised that each of the illustrators on the shortlist had an MA, which perhaps shows that the time spent on an MA honing your skill is time well spent.

Ruth Prickett [agreeing] This does suggest to me that an MA (and more experience) does make a difference and helps artists to improve their work and hone their style.

Q. A month from now the 2016 Student Illustrator of the Year will be selected from your shortlist. In choosing one winner from the shortlist, what will you be looking for among the shortlisted titles?

Rafi Romaya I’ll be looking for the illustrator with the most promise – the most striking, original, distinctive voice. An awareness of current trends is important, whether you decide to be part of them or stand out from them.

Ruth Prickett I’ll be looking for the image that has stayed with me most clearly in the intervening months and the person who I feel shows a clear grasp of their brief and a confident, idiosyncratic way of executing it. Memory is surprisingly important – if you can’t remember an image a few weeks after looking at it the first time, then the chances are that no one else will either.

Q. Looking through hundreds of entries by artists all in (pretty much) the same stages of their careers, did you notice any trends or recurring themes?

Ruth Prickett I think we’re maybe moving on from some of the very flat wholly computer-generated work to something that is a bit more of a hybrid. There are always students who you can clearly see are “doing” a Quentin Blake or some other well-known star. But you tend to screen those out fairly quickly. The main thing is that I don’t think students should cynically chase work by jumping on the latest style. It’s harder to create your own market, but that’s what our greatest illustrators have done and that’s what I think will last longest.

Rafi Romaya It’s easier than ever to have access to great art, especially online, which was clear in the wide range of sources and artforms on display. Katyuli Lloyd’s work had hints of Matisse and was beautifully executed, for example. Jessamy Hawke showed a wonderful way with colour and an almost filmic use of perspective and angles. It was also interesting to see how fundamental traditional skills like drawing continue to be in this digital age.

Q. What role do competitions such as the VILLA play in a student illustrator’s development?

Rafi Romaya To have your work shown alongside so many great illustrators and to be exhibited at the V&A is a huge privilege. Awards like this also make available feedback from professionals and taking part can possibly lead on to further commissions. It can give people at the start of their career the best possible foothold in the industry.

Ruth Prickett I hope it will encourage them to persevere and keep plugging away. Making a career in this competitive area is never going to be easy, so a prestigious award must surely give them a leg up. Then it’s up to them!

Q. What makes the V&A Illustration Awards so special and what do you think sets it apart from other competitions?

Rafi Romaya  The V&A Illustration awards are special as they are all-inclusive with no age restriction or fee or set criteria – they are simply a chance to showcase your best work. The online archive has become an incomparable archive of some of the best illustration by emerging talent. (It’s a resource all Art Directors should check when looking for new contacts.)

Ruth Prickett The V&A is world-famous as the repository of decorative art from across the ages – and illustration is one of the main forms of decorative art that touches everyone’s lives. It’s one of the most democratic and accessible of art forms. Who wouldn’t want to be picked out of a crowd and given an award by such an illustrious institution? They will also attract far more attention for the winners than many smaller or more niche awards.

Q. Finally, with all your knowledge of the illustration/graphic design industry, what words of advice do you have for a budding illustrator currently in – or fresh out of – art school?

Ruth Prickett Keep on trying. Don’t give up. Learn from your failures – and from criticism. Stick your neck out and “sell” your work hard. It all sounds trite, but these really are true.

Rafi Romaya Think of what kind of illustrator you want to be and where your work will fit in. Get an agent or be your own agent. Remain open to the world – look at everything. Draw, draw, draw! And most importantly, if illustration’s your chosen career, make sure you’re enjoying it.

Congratulations to all the shortlisted students:

Also, huge thanks to our judges Ruth Prickett and Rafi Romaya for taking the time to share their views. The winner of the 2016 V&A Illustration Awards will be announced at a ceremony at the Victoria and Albert Museum on 23 May 2016 and the winning works will be on display at the V&A from 24 May until 21 August 2016.