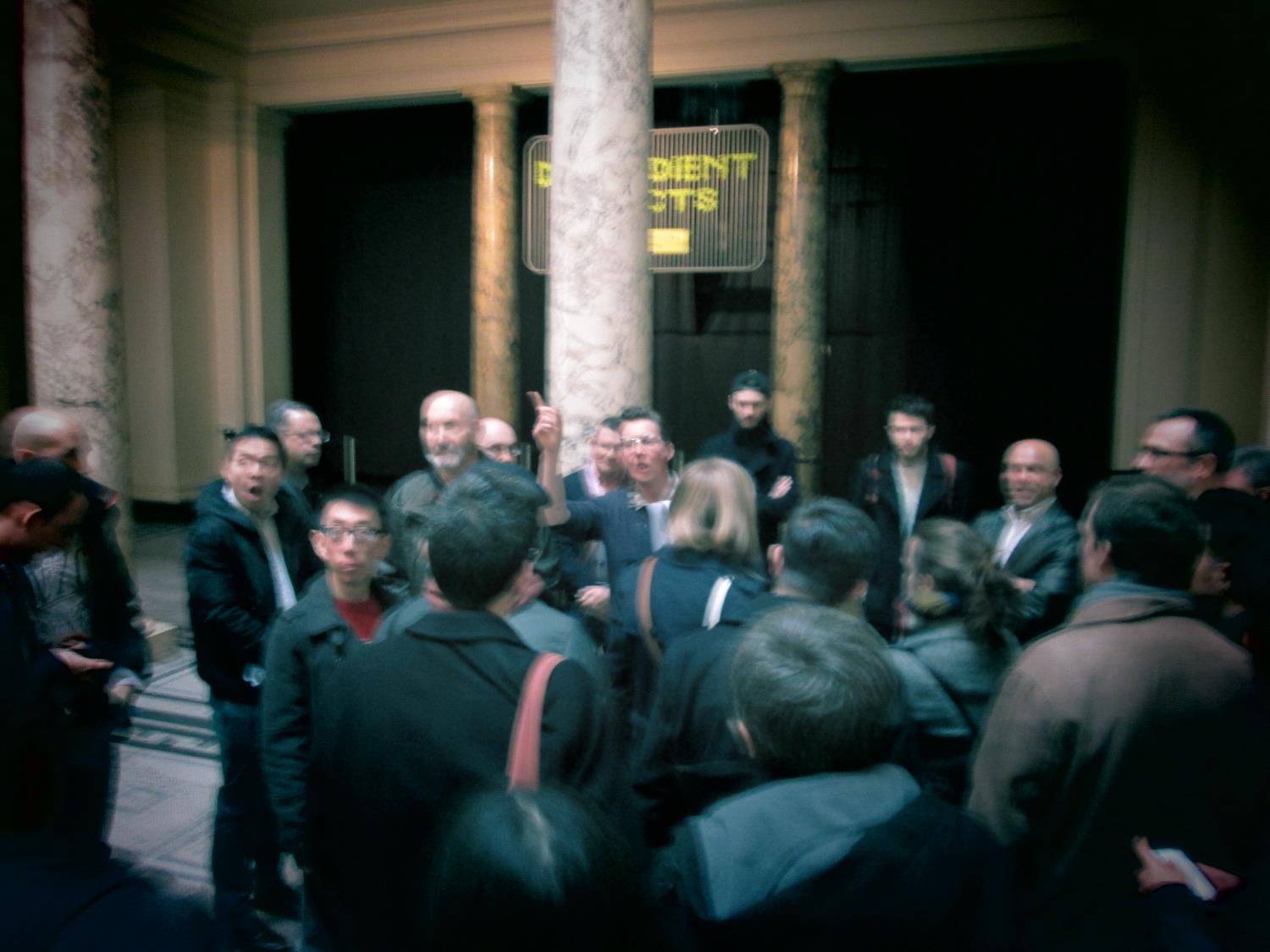 So the after the party, not only did we have to help clean up but we also had to be back in the Museum bright and cheery the next morning, ready for our annual afternoon of events to mark LGBT History Month. This wasn’t too difficult a task though, as we were excited for the day ahead; keen to keep a queer eye firmly on the Museum and also to meet both familiar faces and welcome newcomers.

Unfortunately Assistant Curator of Sculpture, Danielle Thom, had been beset by illness the past few days and so was unable to treat us to her tour exploring masculinity, nationalism and homoeroticism in 18th century Britain, ‘Man? Or Macaroni? Sexual Fluidity in the 18th Century’. However, frequent visitors to this blog will have already seen that Danielle has kindly written two detailed posts which provide an overview of how male homosexuality, effeminacy and so-called sexual deviancy were practiced and perceived during the 18th century – The Macaroni & His Ancestors and Connoisseurship & Classicism.

Thankfully, we had enough time to scarper along and retrieve a DVD we screened the previous night, so we could kick the day off by viewing a selection of treats from the Outfest UCLA Legacy Project archive.

Voice through a Cloud

Up next was Assistant Curator of Prints, Zorian Clayton, leading a whistle-stoptour of the ceramics, glass, and silver galleries exploring curios, trinkets, and oddities in the V&A collection through the novels and aesthetic sensibilities of the writer and artist, Denton Welch (1915-1948).

Zorian and I first discovered Denton’s work through a recommendation the great John Waters made in his book Role Models (2010), where he describes his love for Welch’s writing:

‘Maybe there is no better novel in the world than Denton Welch’s In Youth Is Pleasure. Just holding it in my hands, so precious, so beyond gay, so deliciously subversive, is enough to make illiteracy a worse social crime than hunger.’

Zorian peppered his tour of objects in the Museum with wonderfully descriptive excerpts from Welch’s journals and first two novels. Welch’s detailed, evocative (and often amusing) descriptions of his desire for various objects and the tactile experience of holding them encouraged us to creatively consider the different ways objects can be experienced.

Zorian will be writing some blog posts in the future, further explaining his interest in Denton Welch and exploring how his works can relate to the Museum and its collections.

Zorian and I first met Veronica Mckenzie at Unspeakable!, an LGBTQ symposium held at the London Metropolitan Archives back in December 2013. There, Veronica presented work-in-progress extracts from her film, ‘Under Your Nose,’ which then led into a focused discussion considering the involvement of black lesbians in late 70s and 80s single issue politics and their response to multiple discrimination.

We found the film extracts and the discussions it prompted very informative and also rather exciting – it felt like we were party to a significant moment of seeing these recent histories recorded, helping to ensure they are not lost in the mists of time. Knowing more about the different places where specific events happened and the buildings where support centres where located has also made my wanderings through various parts of London that bit more interesting.

We were very happy to be able to show a very recent edit of the film as part of the day and extremely pleased that Veronica was able to join us for a Q&A, where she talked about her memories of the time, the experience of making the film and also reflections on the similarities and differences between political situations then and now.

We had a full-house for the screening and so thanks to those who were able to withstand having to sit on the floor and a big apology to those we had to regretfully turn away. We will try to let you know of any future screenings of Under Your Nose coming up.

Ken. To be destroyed

Throughout the afternoon, in the rather comfortable surroundings of the British Galleries cinema we showed a short presentation about Sara Davidmann’s exhibition and ongoing project ‘Ken. To be destroyed’.

We first came across Sara’s work when she exhibited ‘Ken. To be destroyed’ as part of the Homotopia Festival in Liverpool, December 2013.

‘It was a family secret that Davidmann’s uncle Ken (K) was trans*. The family attempted to erase this from history and the family album depicts K as male.

The exhibition title was taken from the writing on an envelope that Davidmann found in her mother’s possessions. In the envelope were letters written by, to, and about K’s experiences as s/he tried to reconcile being trans* with his relationship with his wife and the social expectations of married life in the 1950s and 1960s.’

Using family photographs and letters, Davidmann combines photographic processes from K’s life time and the present to queer the family album and reinstate K as trans*. Her exploration of how family histories can be kept, adapted and erased through the personal selection and rejection of objects and stories acutely resonated with us as curatorial staff in a Museum (where we are in many ways custodians of both physical objects and their many possible accompanying histories). Needless to say, we were keen to include her in some of our programming.

As part of Queer and Now, Sara was able to discuss her work whilst in conversation with Jack Halberstam and so we were pleased to give people the opportunity to see more of the visual elements of her project in a more intimate setting.

As always, I’d like to end with a thank you to all those of you who joined us for the afternoon and took such a keen interest in the various histories and ideas that were explored and discussed. We look forward to seeing you all again for next year’s History Month!