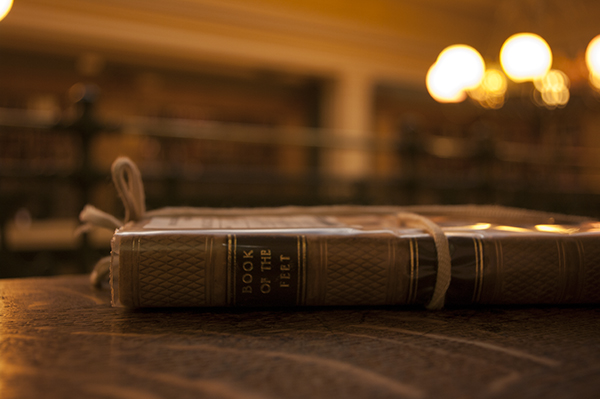 Anita Capewell, a V&A volunteer working with the Visitor Experience team and in the NAL, follows a trail that begins with a tiny leather bound copy of ‘The Book of the Feet’ in the National Art Library and ends up, via Queen Victoria’s boots, in a galaxy far, far away.

As you enter the Shoes: Pleasure and Pain exhibition there is a film of a model stalking through the galleries of the National Art Library (NAL) in fabulous footwear. Sadly for shoe lovers, it’s practical, comfortable shoes with decidedly low heels are appropriate for the small team of volunteers who are slowly working their way through those bookcases, known as ‘Stacks’, wiping away years of dust and adding protective covers to help conserve the most vulnerable books.

Books on fashion, textiles, cobbling and cordwaining can be found on the shelves of Press Mark 147. Book number 147.C.69 is a tiny, Victorian, leather bound book by Joseph Sparkes Hall entitled ‘Book of the Feet’. Intrigued by the books bemusing title, I started to find out more. This blog follows my trail from the NAL, via Queen Victoria herself, to a galaxy far, far away. 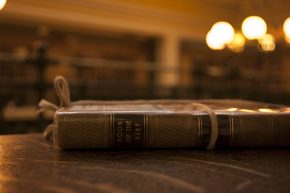 Joseph Sparkes Hall and the Book of the Feet

‘Book of the Feet’ is a tiny and rather verbose history of boots, shoes and Shoe making covering everything from tanning methods to corn treatments. The author, Joseph Sparkes Hall (1811-1891) came from Sidmouth in Devon and trained as a shoemaker, spending most of his working life in London where he achieved fame as a bootmaker and as the inventor of the patented elasticated boot. He went on to make shoes for the Royal Family and built up a company selling across America and Europe. Although Sparkes Hall didn’t make a fortune, he combined high-end design with technical innovation and a degree of marketing wizardry.

Sparkes Hall’s development of the elastic boot went hand in hand with 19th century industrial inventions and innovations in rubber and elastic. He had been making waterproof over shoes (galoshes) made with rubber since 1830 and was interested in developing and incorporating new materials into his footwear. Slipper-like shoes worn at the time were difficult to keep on and laced or button-fastening boots were time consuming for the wearer. Initial experiments were a failure because the early elastics were simply not elastic enough however using wire and India rubber he eventually succeeded. In 1837 he had patented his first design for a slip-on boot with the gusset made from tightly coiled wire and cotton and three years later he created the first patented boot that incorporating what we would today recognize as elastic.

Sparkes Hall was ingenious and also a canny marketing man who knew the power of product placement.

In 1837 he gave a pair of his new boots to the young Queen Victoria, one of the most influential leaders of fashion.Royal approval was incredibly valuable for designers and manufacturers, helping them to attract other wealthy clients for bespoke items and to appeal to the burgeoning mass markets that were starting to buy ready-made goods and clothing.

Queen Victoria enthusiastically adopted the new style of boot and she continued to wear them throughout her life. In the ‘Book of the Feet’ Sparkes Hall explains

‘Her Majesty has been pleased to honor the invention with the most marked and continued patronage; it has been my privilege for some years to make boots of this kind for Her Majesty, and no one who reads the court circular, or is acquainted with her majesty’s habits of walking and exercise in the open air, can doubt the superior claims of the elastic over every other kind of boot.’

The V&A Collection contains a pair of ankle boots by an unknown maker which were exhibited at the Great Exhibition of 1851. They are almost identical to an image of the elastic-sided boot illustrated in  the J. Sparkes Hall prospectus for the Great Exhibition.

Sparkes Hall’s patented elasticated ankle boot are recognised as the forebears of the elasticated Chelsea boot and its close relatives the Jodhpur boot and the Australian Bludstone workboot. The genesis of the name ‘Chelsea boot’ is unclear but it’s seems rather a good generic name as it conjures up both royal and fashion connections.

The Chelsea boot remains a classic style because of comfort and practicality but it continues to have moments in the fashion spotlight. It became particularly popular again in 1960s when shoemakers Annello and Davide produced a new design for the Beatles in 1961 featuring a low Cuban heel. Listening to The Kinks’ 1966 song Dedicated follower of Fashion it’s easy to envisage a  Beatle-booted dandy,  strolling down the King’s Road, the Chelsea street so intrinsically associated with 1960s mod fashion and  once King Charles I’s private road.

The current fashion for Chelseas boots may owe its popularity to influences such as Burberry’s 2015 Chelsea Collection however it’s much more fun to wonder if the 2015 Star Wars reboot ‘Star Wars: The Force Awakens’ may have been responsible for the trend. In an interview given in April 2005 to Starwarshelmets.com , John Mollo, Oscar winning costume designer, recalled that ‘the Stormtrooper boots were standard black UK Chelsea boots which were stained white’. Propstore Live Auctions sold a single such boots in 2014 for £900. If you look very closely at the original 1979 Star Wars: A New Hope film or Star Wars: The Empire Strikes Back you may be able to see the original.

May the patented elasticated boot be with you.

With thanks to Propstore Live Auctions (www.propstore.com) for permission to use one of the Stormtrooper boot photographs from their 2014 auction catalogue and to Raymonds Press Partnership (www.raymondspresspartnership.com) for use of the image of Queen Victoria’s mourning outfit.