V&A objects are not kept just within the hallowed halls of the Museum. Over six hundred objects from the Furniture and Woodwork collection are on long-term loan to other institutions, ranging from a fifteenth-century cupboard in Oakwell Hall, West Yorkshire; to an eighteenth-century box of cutlery to Judge’s Lodgings, Lancaster; to an automaton shaped like a bird cage to the Bath Preservation Trust.

Many staff at the V&A are allowed the opportunity to courier objects to new destinations, both for long-term loans and short-term exhibitions. I was recently sent to Shrewsbury to oversee the move of one such loan, and though the details of it may seem trifling to some, it took two full days and a strong heart to safely see it dismantled, carried down four flights of very narrow stairs, put into a lorry, carried out of the lorry, and reassembled in its new home. 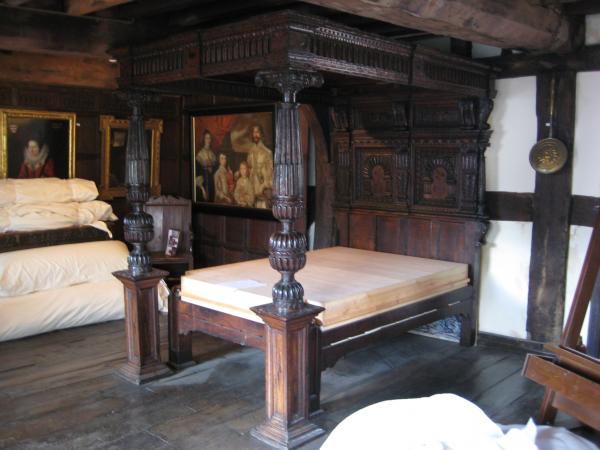 The most challenging of the two objects was a late-Elizabethan bed, formerly property of the Corbets, an ancient Shropshire family. It is made of walnut, inlaid with holly and bog oak, and is inscribed with the initials ‘R.C. and, usefully, 1593, the date it was made. In addition to its geographically-relevant history, it has been on loan in Shrewsbury for the past thirty years, and so is very much part of the town’s cultural makeup, with its hangings produced in the past decade by volunteer embroiderers. This meant I was constantly borne down by the pressure of ensuring the bed would arrive in the new museum in the same condition it left the old one, both the soothe the V&A’s collective  concern, but also so as not to incur the wrath of eighty-thousand disenfranchised Salopians. Luckily, as the new museum is just around the corner from the old, the chances of the bed incurring significant damage were somewhat lesser than they might be if it had been travelling a greater distance. Even so, the narrow, windy streets, combined with my personal brand of paranoia, caused one or two gasps to erupt from these lips, and still set my fingers a-quivering above the keyboard.

Since 1983 the Corbet Bed had been held in Rowley’s House, an early-seventeenth-century wonky hodge-podge of low-ceilinged, timber buildings. Unfortunately, a low-ceilinged, timber-framed and panelled room didn’t do many favours for the bed as an object, and the small windows ensured it was in perpetual shadow. The bed, which was effectively made of old, brown wood, was somewhat camouflaged by all the other old, brown wood which surrounded it. Details were cast in shadow and as good as hidden from visitors’ eyes.

After a first day of condition-checking, planning and some excellent (and cheap) local food, by the second day a team of five technicians and I were ready to make the attempt. The bed, we found, can be broken down into at least twenty-one separable parts, each of which was carefully wrapped to protect it during its short journey. It had evidently been repaired and strengthened at some point in its history, as revealed by the presence of metal brackets to support the joints. This was the first time the bed had come apart since its installation, an occasion from which there were no photographs (I made up for this three-decade old lapse and took almost two-hundred snaps), and no diagrams or instructions, so to a degree we were unsighted.  Luckily, the technicians had deinstalled William Morris’ bed from Kelmscott Manor for last year’s Pre-Raphaelites exhibition at Tate Britain, so there weren’t too many surprises regarding the bed’s construction. There was a lot of dust on the tester panel, though, which I vacuumed off with a degree of enthusiasm familiar to anyone who has witnessed my attitude to housework. 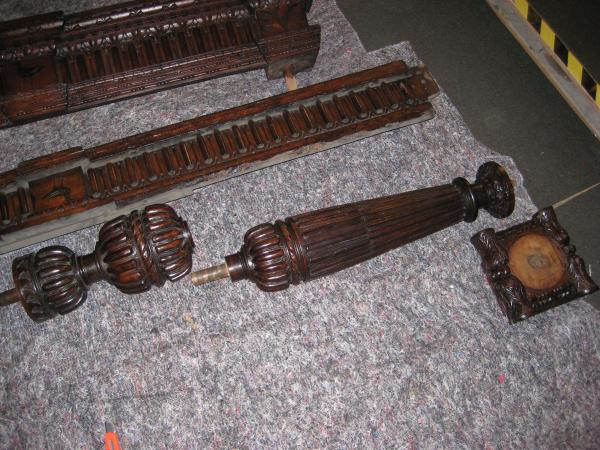 (top) Detail of the carved and inlaid headboard after the tester had been removed.

(Below) parts of a bed post laid-out before wrapping © Victoria & Albert Museum, London

The hairiest moments came when the largest parts of the bed, namely the tester panel and the headboard, had to be carried down four flights of very tight stairs, and outside to the waiting van. Days later, I still feel great admiration for the technicians’ strength, precision and level-headedness despite complaints such as “I felt like my arm was exploding” and “couldn’t we just make a hole in the wall?” However, there wasn’t much of a chance to recharge (or reassemble) limbs, as shortly afterwards they had to follow the tester with the chunky, elaborately-carved and inlaid headboard. 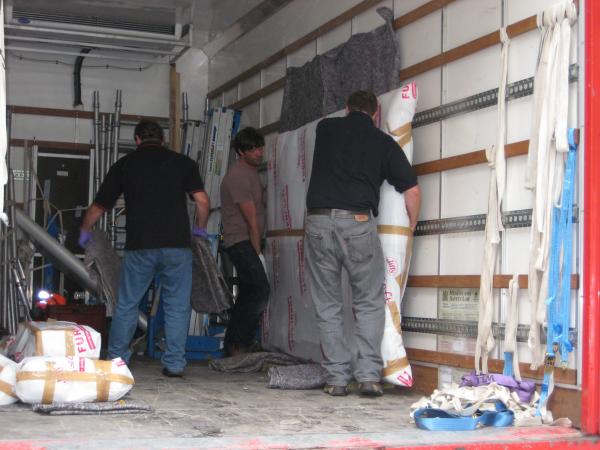 My fears about the new venue were allayed as soon as we alighted in the new space, almost completely blocking the road with our lorry in the process. To call it a new space is perhaps slightly misleading, as it is actually inside a late-medieval mansion. I was told by Emma-Kate Lanyon, the curator, that the building was found to be close to collapse, understandably causing the works to be delayed for two years while seven tons of steel were inserted into its structure. The wait, I think, will be more than worthwhile. The new Shrewsbury Museum and Art Gallery will be arranged broadly chronologically and, happily, the oldest objects will be inside the oldest parts of the building. The Corbet bed will be the centrepiece of a large, bright room, a space which really allows the bed to demonstrate its full potential as a piece of craftsmanship. No longer is it swamped by gloom, but made more visually accessible by the (theoretical) sunshine and freshly-plastered (very) white walls.

For now, since the museum is still being finished, it will sit under a hood made of stiff bubblewrap. Come Christmastime, however, they shall have something signifant to unwrap. 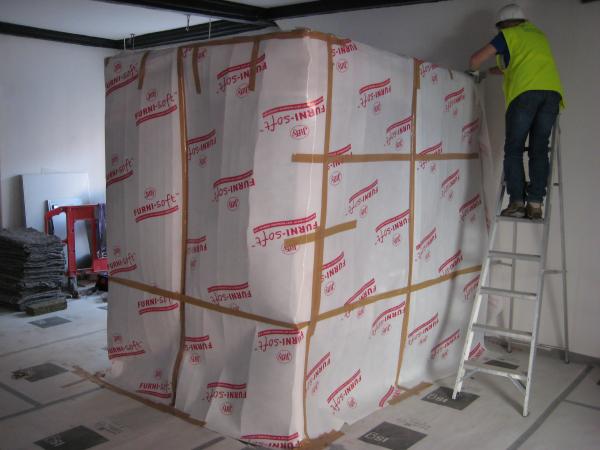 The Shrewsbury Museum and Art Gallery is due to open in late-2013.

What a great post, the pictures look great too.

I’m putting a piece together about the project and would love to use a couple of your photos? I can always provide a credit for each photo.

I look forward to hearing from you.

I’m pleased you liked the post, Crown performed excellently over the course of the two days. I need to ask before giving permission for you to use any images exactly where they will appear (i.e. which website, publication etc.)? It should be fine as long as they are properly credited to © Victoria and Albert Museum, London.

I’m pleased you liked the post, Crown performed excellently over the course of the two days. I need to ask before giving permission for you to use any images exactly where they will appear (i.e. which website, publication etc.)? It should be fine as long as they are properly credited to © Victoria and Albert Museum, London.