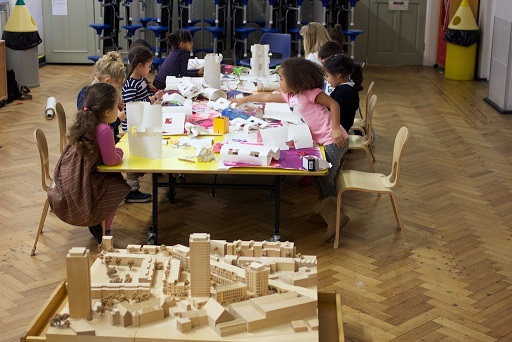 I had a busy run up to the festive period, making artists out of nursery children, a group from Open Age, and also the general public at the V&A.

On the 19th and 20th November 2014, I held a film screening and paper folding workshop at the Museum. The entrance to the Architecture Gallery at the V&A has a classic marble staircase. It echoes to the sound of history. Visitors approaching the space would have heard sounds and voices of a film programme – more details of which you can find on my own blog.

Later in November, I returned to Nursery for a week that I worked with over the summer. No ordinary nursery as St Anne’s is one of the oldest in London established in 1908. It is conveniently sited just at the end of the road where I have my community artist studio. Also chiming with the themes of my residency, the nursery is going to amalgamate next year with Avondale Park school and will move into a brand new building. The listed building they are vacating will probably be converted into flats in due course.
What an experience and many thanks to all the staff and children. The 3-5 year old’s were delightful and very engaging. They coped well with my ambitious programme of inter-related art: drawing, painting, playing with an architectural model, watching short films, making houses and tower blocks from paper. The emphasis was on being creative and having fun. 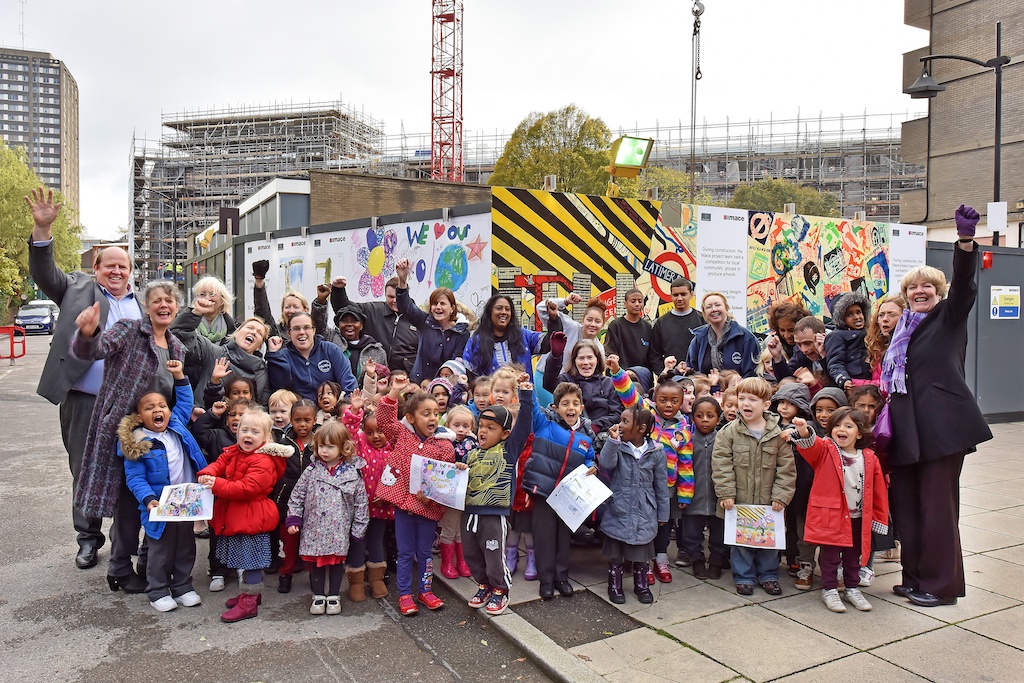 Here are four things I learnt from the children.
1. Little hands, big hearts.
In preparing material, I had not factored in the tiny hands of the children. Tearing a piece of paper was not as easy for some as I had imagined.  Art can be hard work and physical.
2. We need to learn how to draw a house.
I had naively assumed that the children would already be able to draw an outline of a house. As if this was somehow programmed in their DNA. No. They had to learn to connect lines that would form a wall, roof, door, windows and finally a house. This is where tracing or transparent sheets come in handy.
3. Practice makes perfect
We would often start each session by returning back to basics. How to fold a paper once, twice and then open up to discover a sheet with four folds. How these could be bent in a variety of ways to create structures. Where to cut a door? The slightly more tricky way of cutting a window. Practice, almost perfect.

I look forward to returning back to St Anne’s over the coming months. The completed cityscape will feature in my end of residency display at the V&A Museum from 6-8th February 2015.
Nearly forgot to mention that the nursery children also took part in a recent unveiling of art work at the building site of More West. Over the summer, I had worked with other artists and children in producing two of the display panels. Great to see these finally in situ. 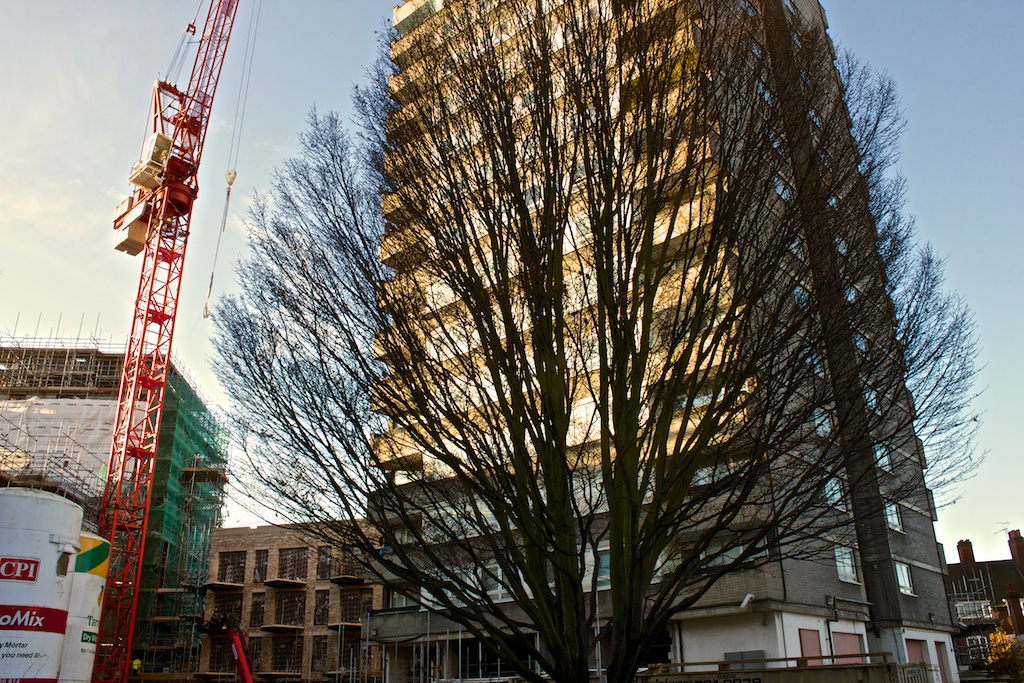 I recorded an interview with Joanna Sutherland, Associate Architect at Haworth Tompkins. We discussed a range of topics focused around More West: partnership working, design principles, gentrification and the status of women in the profession. Not all of these made it into the short film.

More West is the first housing development in this area of North Kensington since the social housing of the 1960s-70s. It is building onto the pre-existing Silchester Estate and is incorporating Frinstead House, a twenty-floor high rise. It is an indication of how development will take place in the future. This Peabody housing consists of 112 flats with mixed social and market tenure. As community artist, I am very interested in how this development will change the area and what type of community is forming here. These formed the basis of some of my questions to Joanna.

Constantine Gras: “What type of community is going to be forming as a result of this development? Obviously we’ve got the pre-existing community that exists as part of the wider estate. Probably the new incoming residents will be more of a professional or affluent class. Have you got a sense of how this is forming and what potential impact this may have on the wider area, either positive or negative?”Joanna Sutherland: “It’s difficult to understand exactly how this development will impact on a community. It’s unusual to work on a housing project where you know a number of the residents that are going to be remaining within the development. So having the decant residents remaining in the estate is an important continuity. Also I understand that the priority for the new social rent units will be to move people from the nearby estates. But this is a question for Peabody and RBKC. They are prioritising the immediate community for location in these units, if they need to go up in size or down. Then we’ll have shared ownership and market units that are smaller, one and two bedroom. And in the second phase of marketing I think there are a few larger units. Those are being sold on the open market. I understand also that Peabody’s policy is they are not necessarily being sold as buy-to-let. They are sold to people who are wanting to move into the area and can afford to buy obviously. The design of the estate and the design of the new block is integrated. So there is no distinction between social rent units or the affordable and the market units. And the private communal garden space is to be shared by the new residents and the residents of Frinstead House. So one hopes that the design and also the way in which the new social rent homes are allocated, as well as whose buying these homes, means that a mixed community is going to evolve.I think the potential area of conflict will be with the existing residents within the high rise. I understand they have been particularly frustrated with the time the development is taking, with the noise and the ongoing impact on them. They have been quite inconvenienced by the work and one hopes that once the development is complete and they have their new entrance and access to the garden, that the disruption will become a memory. And they will start to enjoy it. We can create some good community events, especially with the existing community space at the base of Frinstead House as this has access to the garden. So with careful organisation through the Silchester Resident’s Association, we want to find ways in which people can come together with the new residents. Add to that, there is the work that Nathan Coley is doing with his new sculpture on the roof. That is at least a sort of talking point. It creates something that enables the future community to be brought together. And obviously the work that you are doing as V&A Community Artist in Residence. I don’t know whether we can do much more.”

Lastly, I invited some members of the local Open Age group to see the the wonderful Constable exhibition. They then created a panoramic drawing and Myrna Shoa made this short film about the experience.

January is my last official month as the Community Artist in Residence, and the project will culminate in a weekend event at the V&A on the 7th and 8th Februrary, which all are welcome to attend.