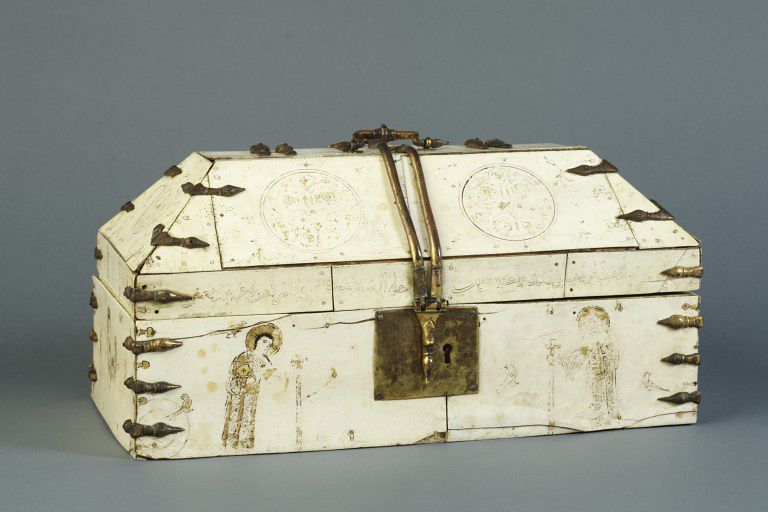 As a student at the Courtauld Institute of Art my perception of the V&A’s collections is often shaped by my art historical studies. Over the last couple of years I have experienced the museum both as a student and as a volunteer. I have been volunteering as a Welcoming Ambassador at the V&A for a year and a half and I am currently in my final year of study for a BA in History of Art.

During classes here I have actively engaged with specific objects, often making connections between works located in different galleries. It is as though an invisible piece of thread runs between galleries connecting works in my mind.

For instance, how might we connect an Oliphant c.1000-1100 from the Medieval gallery to a Siculo-Arabic ivory casket c.1100-1200 found in the Islamic gallery?

Currently I am exploring art of the East and West during the time of the Crusades. The Oliphant, despite originating in Southern Italy bears a distinctly Islamic decorative surface. Curators believe this pattern is perhaps derived from Fatimid textiles and ceramics of Cairo. The Casket, a so-called ‘Siculo-Arabic’ work, draws attention to the significance of Sicily as a melting pot for Eastern and Western artistic ideas in the 12th century. On this peculiar object, Christian saints are depicted alongside a poetic Arabic inscription addressing the owner of the casket.

Combining Eastern and Western features, these objects pose a curatorial challenge by denying fixed categorisation. In separate galleries these works are communicating a similar idea, in that they are vehicles for thinking about artistic interchange between the East and West in the 12th century.

As my volunteer shifts end I often stay behind to explore a collection, inevitably discovering a beautiful object I didn’t know existed. The V&A houses so many secret treasures and offers a myriad of these potential ‘connections’, it’s one of the reasons I love it here.