There is now just one month left to see ‘Perched’ in the V&A’s Islamic Middle East Gallery. This installation comprises a flock of 41 mould-blown glass swallows, made by Turkish artist and designer, Felekşan Onar. The swallows have trimmed wings and are unable to fly. The installation is Onar’s artistic response to the millions of displaced Syrians in Turkey. Having fled a war, many of these refugees have landed in Istanbul, where Onar lives. Like the birds in ‘Perched’, they are unable to move on – they are grounded, with nowhere else to go.

The swallows’ form was inspired by Birds Without Wings, a historical novel by Louis de Bernières (2004). The novel is set during the wars between Greece and Turkey in the early 20th century, as the Ottoman empire broke up. The fighting caused millions to abandon their homes: Christians fled to Greece, Muslims to Turkey. Finally, in 1923, an official exchange of populations was agreed, forcing migration on those who had not yet fled. Onar remembers stories of this time from her childhood. She talks movingly about her inspiration for the display in this interview for Hyperallergic.

Numbers are significant to Onar. Though she is not superstitious, her work is deeply embedded in Turkish cultural traditions. She explains that almost every day a Turkish person says “41 times masha’ Allah”, one more than 40, to invoke good fortune and keep away the evil eye. Traditionally, when you invited neighbours to a feast, the custom was to make 41 different dishes. 40 is an important, holy number in many religions, so one more than 40 makes extra good luck. Onar has been making her art pieces in repetitions of 41, so that when she had to decide how many birds to make, 41 was the first number that came to her mind.

Onar started working with glass in 2003 and uses various techniques to showcase the qualities of the material. She says, “Through glass, I speak, breathe and live”. The birds in ‘Perched’ were made at Berlin Art Glas where Onar had a residency. She started by sculpting a swallow from clay, which became the master model from which to make a two-piece plaster mould.

The glass birds were blown into the mould, using each mould 6-8 times before it fell apart. The two parts of the mould are opened to release the bird, which is still hot from the furnace, allowing the artist to sculpt the tail or make changes to the posture – tilting the head, raising the body, etc. This means that each bird is unique. The bird’s tail remains attached to the blowing rod until the bird is finished; that area is then cold-worked, using mechanical tools and machines to polish it and flatten a small area where the bird can sit. The artist also etched in her signature and the number of that bird within the wider group.

The birds are all different colours and some of them have a beautiful lustre to them; others have a surface effect that looks like feathers. To achieve this effect, Onar used coloured glass granules made of pulverized glass with metal added to make the colours. She sifted these on to the glass surface while it was still hot, sometimes in the form of larger granules, sometimes more of a powder, resulting in different surface textures.

The lustre effect happens when elements in the colour, such as iron or copper, are hit with a flame from the furnace or a torch; this causes a reduction in the elements and they become metallic. It’s a bit like the raku process in ceramics – they are burned after firing in order to give them a metallic surface effect.

We knew the birds were different colours before they arrived, but nothing prepared us for how colourful they actually were, when we started to unpack them and see them all massed together for the first time.

To start with we grouped them by colour and then began to work out what might be sub-groupings within the wider group of 41: which colours and poses would work well together.

Felekşan had seen photographs of the display case and the glass shelves reminded her of the telephone wires that real-life swallows perch on, and thought that at least half of the birds should sit on the shelves. That was the only steer she gave us in terms of how the birds should be displayed. I looked at pictures of swallows online to give me ideas for how they could be grouped, and this inspired me to show some side by side, others next to each other but facing in different directions.

We were reusing a tall narrow plinth from the previous display in that case, which invited the notion of birds drinking water at a fountain, so I selected two whose beaks pointed downwards.

One of the birds had a particularly downward tilting head, which invited the slightly cheeky notion of it peering down on you from above.

But I was also conscious that these birds represented refugees so there should be a sense of distance and isolation, even while loosely grouped together.

The display opened in time for Refugee Week in June 2018, and became the lead image on the leaflet and website. We also organised a really moving evening event, in which Felekşan Onar came together for the first time with Louis de Bernières, whose book had so inspired her.

They each talked individually about their own works, followed by a discussion and questions from the audience. Louis de Bernières shared the hope that Birds Without Wings would be the book he was remembered for.

A reception followed as well as a book signing – copies of the book literally flew off the shelves.

In October we organised for Felekşan to give an In Focus talk in front of the display, which was extremely well attended – more people turned out to hear her than often come for these talks, including students from Imperial College, over the road, who (I was amazed to hear) were writing about ‘Perched’ for their studies. Since then I have also met an art history MA student who had chosen to write about ‘Perched’ for his dissertation.

With a display like this, which is open to anyone visiting the Museum, it can be difficult to gauge the reaction of visitors, but it seems to have attracted a lot of attention. People are drawn towards the case by the delicate beauty of the birds, then they read about its meaning and are deeply moved. Even while we were installing the display, a group of school children wandered over and looked at the birds. I have seen people sitting and drawing in front of the case. I have been told that the Museum’s Guides often include the display on their introductory tours, and one of them passed on this message: “It’s an incredibly moving work; I always get a really positive and sympathetic response to it when I include it in my Intro tours”.

Other visitors have shared their comments on social media: this visitor commented on Instagram that Perched was “probably the most beautiful and touching work currently at @vamuseum… You cannot see this and remain unmoved by the tragedy so many people face”. 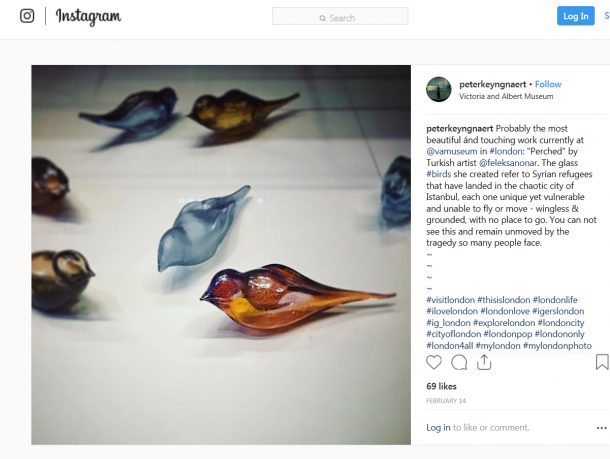 Once the display closes here (the last day is 22nd April), the birds will fly back to their temporary home in Berlin. Onar has now raised the total number of the birds in the flock to 99, another significant number in Muslim cultures, as Allah has 99 names or attributes. Onar is looking for other venues for the birds to fly to – in the West, where she feels the refugees’ story still needs to be heard – though we are delighted that seven of the birds will remain in the V&A and be accessioned into our permanent collection. Again the number 7 is significant to Felekşan: she says it is “one of the most magical and holy numbers throughout history and across cultures”. Onar talks about how a group of seven swallows feels to her “like a community”, so that a display on a much smaller scale than we currently have in the Jameel Gallery can still convey her original message.

If you have enjoyed visiting this display, we would be delighted if you would share your comments in the space below, so that we can capture more of these reactions to this beautiful and moving display. It has been our pleasure to provide a haven to these birds over these 11 months.