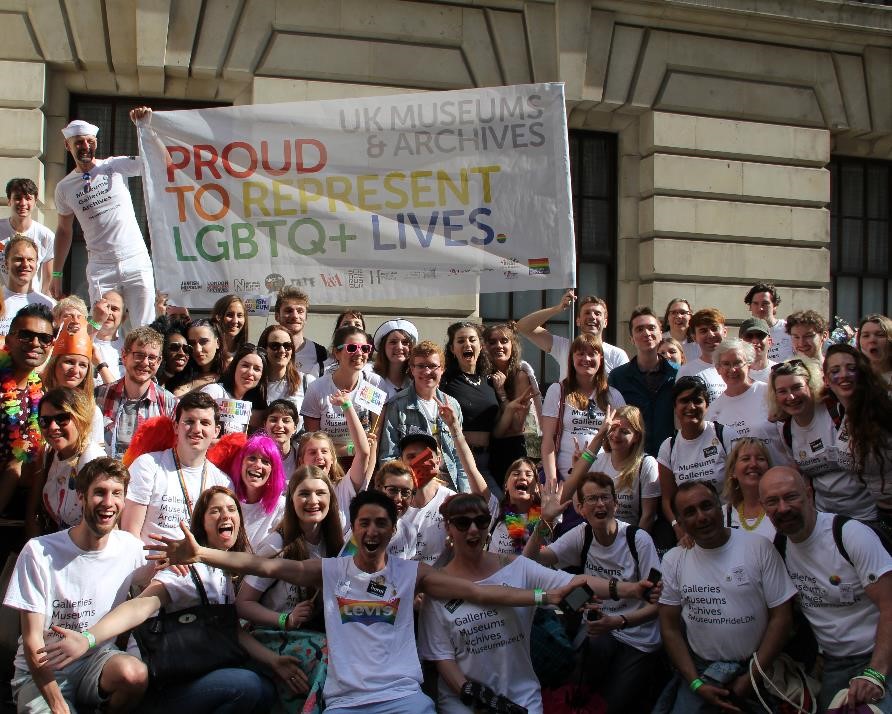 London saw its first Gay Pride rally in 1972. Since then Pride has developed and grown to become an annual and widely attended event.

Last weekend members of the V&A’s LGBTQ Group joined forces with colleagues from the Museums Association, Royal Museums Greenwich, the Natural History Museum, Tate, Horniman Museum & Gardens, the Jewish Museum, London Metropolitan Archives, the National Archives and the Science Museum. Our 150-strong group made history as we officially marched for the first time under the banner (literally!) of UK Museums and Archives.

Each of us had our own personal reasons for marching but together we wanted to collectively promote museums and archives as LGBTQ-friendly spaces. As the photograph above suggests, it was a fun day and it was lovely to get such positive responses from the crowd as we marched.

To help identify and visually unite the group we decided to don matching t-shirts for the day. Having been volunteered to design them, I suggested letting people to personalise the backs of them to highlight particular objects or individuals related to their collections (or whatever they felt like!). On the day I was delighted to see my basic sketches of a vitrine, a frame and a book appear filled with a variety of creative additions.

Some of our group will explain the reasons for their particular design choices in future blog posts.

Thanks to the work of others in the group, we were able to hand out flyers as we marched along. These highlighted aspects of our different collections – a new one on me was the Natural History Museum’s inclusion of Franz Nopcsa von Felső-Szilvás ‘nicknamed the dinosaur baron of Transylvania … a notable historic gay paleontologist’. For the V&A, we opted for the striking Charles James dress, which is on display in Gallery 40.