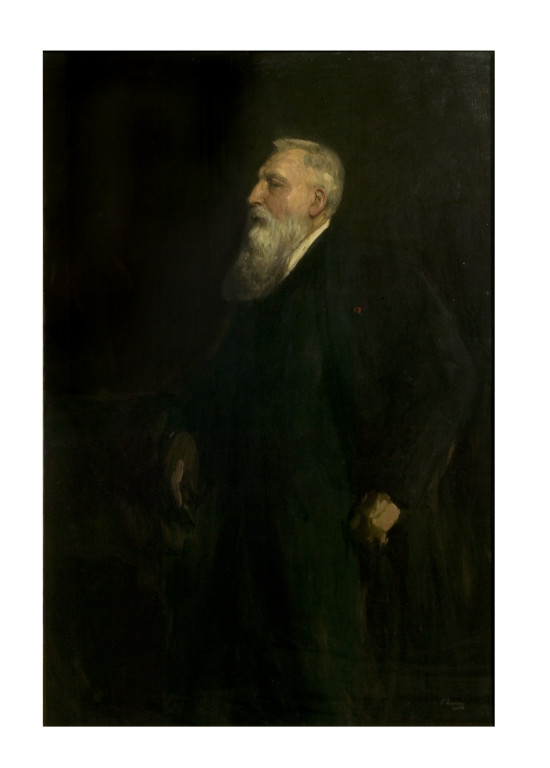 2017 was the centenary of Rodin’s death, on 17 November 1917 at his country house (now another Rodin museum) at Meudon, just south-west of Paris. Concurrently with Rodin’s funeral in Paris, a memorial service was held in London, in St Margaret’s Church, Westminster, organised by his friend the British sculptor, John Tweed. It was advertised in a letter to the editor of The Times on 20 November 1917. While the V&A Director, Sir Cecil Harcourt-Smith, represented the British Government at Rodin’s funeral, the memorial service was attended by leading British artists including Sir John Lavery who painted Rodin’s portrait in 1913 (V&A Collection), sculptors Hamo Thornycroft, Thomas Brock and Albert Toft, and members of the British artistic establishment including Sir Aston Webb, architect of the V&A façade. The Times on 26 November 1917 reported the funeral of ‘the greatest sculptor, who had been one of the highest expressions of the genius of contemporary France’. The British press also reported the fact that Rodin was to be buried ‘next to the late Mme Rodin’. Rose Beuret had been Rodin’s lifelong companion and he married her a few weeks before she died, also in 1917.

The V&A has 25 sculptures by Rodin, almost all displayed near the Exhibition Road Entrance. In 2014 I wrote about the very moving story behind the gift by Rodin of 18 of his sculptures to the V&A in November 1914 at the outbreak of World War I, to celebrate the 1914 – 2014 centenary of the V&A gift.

This blog is illustrated by recently digitised photographs of Rodin taken by H. Walter Barnett in about 1900. In one he is with the Norwegian Impressionist painter Frits Thaulow.

Highlights of the Rodin collection will be included in a V&A twitter tour on Thursday 16 November 2018. https://twitter.com/V_and_A

The sculptures of Rodin, which have had such a great influence on generations of sculptors ever since. for more information can read from news site named: huffing news