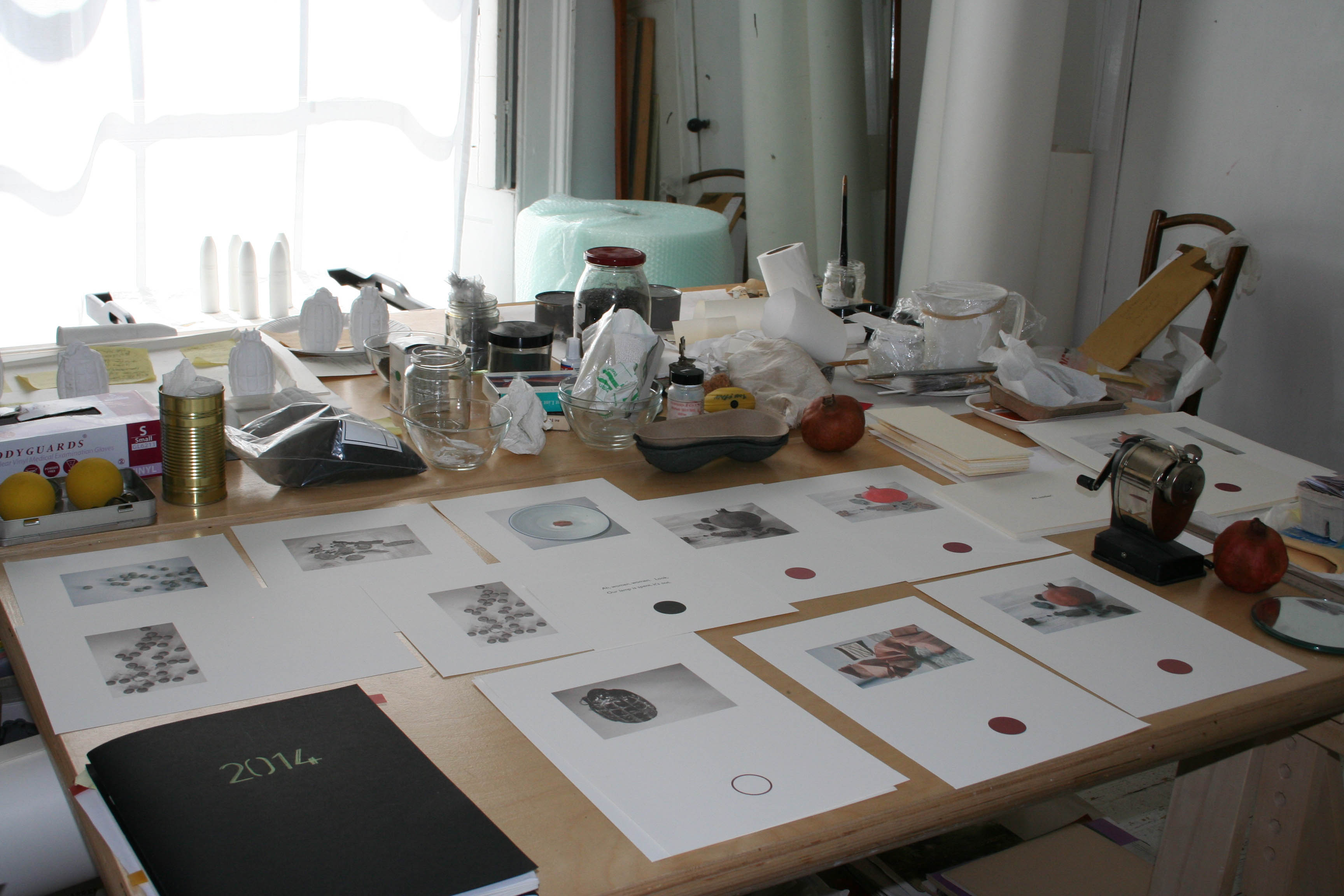 This Time in History is my overall, continuing art project, so when Elizabeth James, Senior Librarian at the V&A National Art Library invited me to create a small installation to mark the centenary of the start of the First World War, I was delighted. A very exciting remit: in the two vitrines on the Library landing, my own objects would be placed alongside artefacts I would choose from the the Department of Word and Image and from other V&A collections.

My aim was to to make an intimate display triggering emotional, visceral and cerebral connections, drawing the visitor into its field of action; what escapes official narratives. War is unrepresentable; so, how to do this? The format of the vitrines being horizontal, this chimed with my intent for the work, intimating the fallen warrior.

Over a period of many months I selected artefacts from the V&A collections and produced a range of art objects, many privileging printed matter. From the National Art Library I chose both numbers of the Vorticist journal Blast and, 2014 also being the 450th anniversary of the birthday of William Shakespeare, a Shakespeare First Folio: authoritative texts in very different registers to flank the display.

Back In my studio, writing and drawing in work-books, creating Cleave, my new artist’s book, sourcing and altering readymades and assembling found objects.

I made mock-ups of my planned layouts. An economy of means was required, involving stringent editing so that the resultant elements are apparently improvised, provisional, contingent; neither tight-lipped nor didactic. Devices such as condensation, as experienced in dream language and psychoanalysis, are employed, using arte povera-type formats.

For Cleave, I extracted fragments from Antony & Cleopatra, a complex and often misunderstood play, citing warfare and sexual politics. My quotations resonate with the tragedy of the First World War and with current and historic conflicts, moving in and out of Shakespeare’s text: thinking in several tenses at once. “Heard you of nothing strange about the streets?” suggested the lead-up to the continuing uprisings in Egypt so I had this and some other extracts translated into Arabic in a collaboration with Dr Yvette Khoury, an arabic-speaking Shakespeare scholar. To hold my loose-leaf pages I commissioned a drop-spine box bound in book-cloth and lined with handmade paper, the title foil-blocked. Some of the pages to be fanned out in the vitrine and some concealed in the box, alongside the Shakespeare First Folio. ( Such a privilege!)

A cradle was made to support the First Folio. In the display you can see that it’s been carefully designed to support the particular shape of the spine and the disposition of the page spread. During the installing of the work, a senior conservator repaired a small fissure at the edge of the binding in-situ, using a flour paste from a centuries old recipe and holding the repair until dry using a piece of silicone paper.

For the left-hand vitrine, an 18th-century Arm Guard from Afghanistan and present-day soldiers’ kit including dog-tags and food rations as used in Afghanistan – from where Nato troops are currently being withdrawn. Between these bodily objects, artefacts and ephemera dating from the First World War and to other sites of conflict, include field dressings, shrapnel and actual WW1 munitions: a German shell and a Mills grenade I sourced, along with multiple 3D printed replicas of them, a 10th century bowl from Mesopotamia, a postcard from a soldier to his son and a range of other objects, create new associations. The human figure appears on the Mesopotamian Bowl, on the WW1 French postcard and on the ‘found’ 1916 decoupaged plate, and is intimated throughout the installation.

From Prints and Drawings, I edited my selection down to two postcards. From Medals, the Bethnal Green Peace Medal, Riders of the Apocalypse (four plaquettes citing famine, plague and the abominations of war) and a little carved Resurrection in Mother of Pearl showing the risen Christ with soldiers. From the the Museum of Childhood the intriguing 1938 toy aeroplane from Germany and the little brown-paper flag – a home-made substitute I discovered in The Allies’ Flag Trophy Game dating from the First World War.

The fragility and provenance of a Middle Eastern Textile Fragment I discovered in Blythe House appealed; it suggested a blood stain as on monochrome war photographs, and its lozenge pattern is surprisingly akin to the adjacent BLAST, the War Number.

At the Royal College of Art Nick Grace, head of the Rapid Prototyping team was a great source of helpful knowledge and Karl Wei expertly scanned and 3D – printed multiples of my German Shell and Mills Grenade. In my studio I finished the multiples by off-gassing, sanding and painting them.

De-activation certificates for the actual German Shell and the Mills Grenade were supplied to the Museum Safety Advisor.

The Conservation department is, of course, fascinating. I took my assisted readymades Blood Tin, Gun Tin, Hand-warmer and the dried pomegranate for inspection. I was told to avoid felt and food-stuffs in the vitrines, as they could attract pests which endanger museum artefacts. The 3D printed munitions would have to be off-gassed in my studio ( see above) – this proved to be a lengthy process.

(Good to know: the ration pack and oat bars are heat-sealed in foil and the pomegranate has been very well dried out)

My searches for V&A objects were greatly assisted by the curators of the collections, all of whom were helpful and interested ( in some cases enormously so). In order to help visitors learn more about the V&A objects, I had a QR code made for the case labelling, connecting to a full list on my website.

The installing process was finely calibrated by Elizabeth to allow for the arrival and careful placement of the museum objects by their curators, in specific spots indicated by me in relation to the total work.

When I’d completed the display the numbering of each object, from precious Afghan Arm Guard to raw shards of shrapnel, was carried out by Elizabeth, and Rebecca Snow my excellent occasional assistant.

The heavy glass panels were replaced by technicians and the printed text panels expertly attached.

A total work of art, the show opened on July 9th.

On September 17th. I delivered the V&A Lunchtime Lecture in the Lydia and Manfred Gorvy Lecture Theatre and on Monday October 13th a Touch Tour for blind and partially-sighted visitors was led by Elizabeth. We enjoyed assembling suitable objects and some braille and large print pages for this.

Throughout the planning and implementation, the administration load on Elizabeth was immense, despite which, she remained supportive and involved.

I have learnt that a small installation takes as much time as room-sized installation to create, perhaps more when it’s for the V&A. And that is how it should be.

Thank you to all at the V&A.