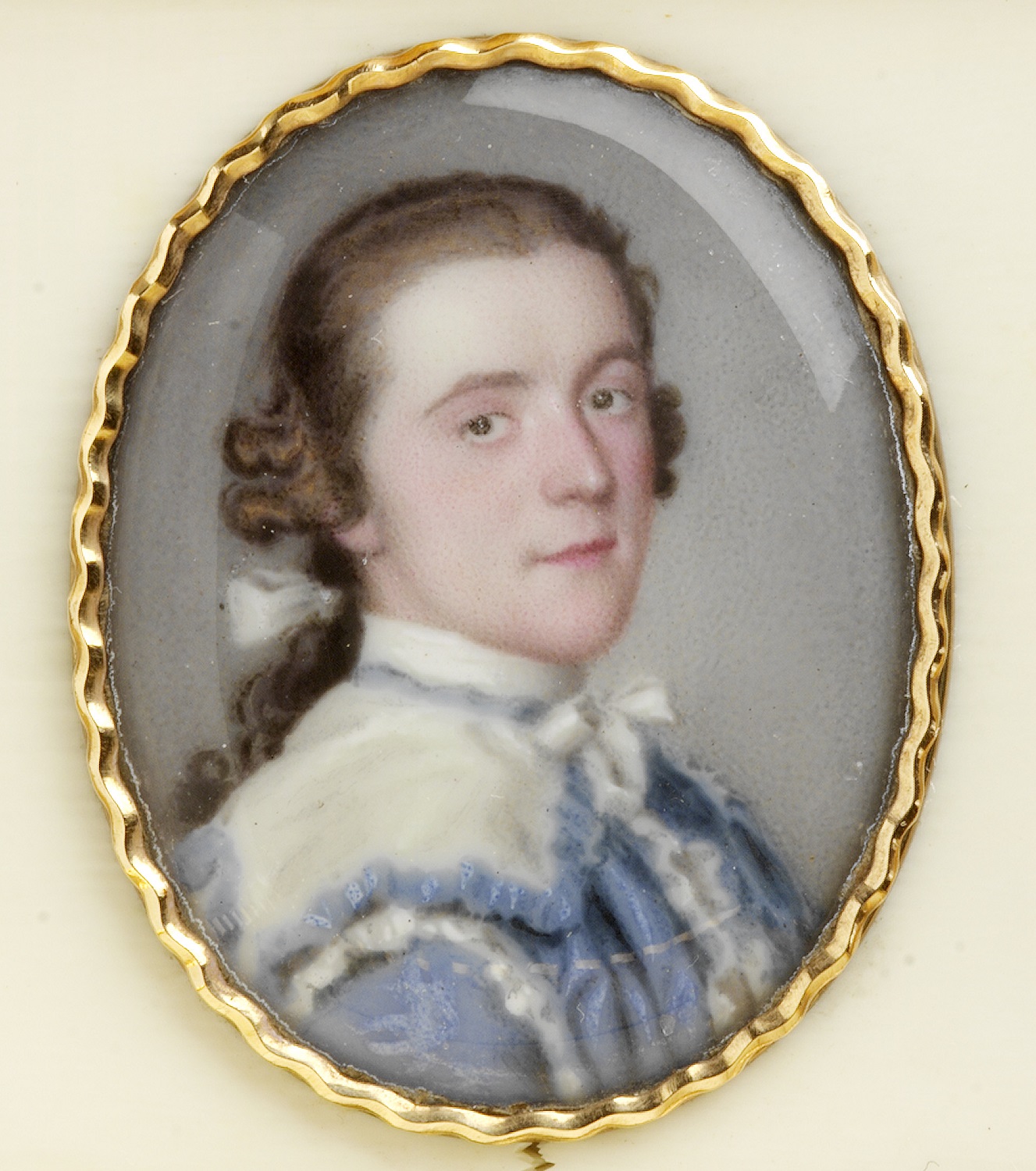 Jean-Etienne Liotard (1702-89) originally trained as an enamellist in Geneva, but he is perhaps best known today for his wonderful half-length portraits in pastel. He painted an enormous variety of people, from members of his own family, to esteemed contemporaries such as Voltaire and David Garrick, as well as various members of European royal and noble houses. Liotard also painted several self-portraits, which provide a remarkably intimate insight into the changing appearance of the artist from his early thirties until just a few years before his death.

The Royal Academy is currently exhibiting many of Liotard’s wonderful pastel portraits, as well as an assortment of his works in oil, some trompe-l’oeil pictures, and a selection of his enamelled miniatures, including this one from the Gilbert Collection of John, first Earl of Spencer (1734-83):

Liotard painted this portrait of Spencer sometime between 1753 and 1755, when the Earl was a young man, aged between 19 and 21. He is fashionably and elaborately dressed with the white ribbon that holds his fur stole in place mirroring the one holding back his long, curled hair.

The miniature was later mounted in the lid of a rectangular, gold-mounted ivory snuffbox comprising six panels of ivory:

The front panel depicts a familiar classical scene , that of the family of Darius III, King of Persia, kneeling before Alexander the Great to beg for mercy following the defeat of the Persians by the Greeks:

The sides and base of the box display intricate carvings of flowers, scrolls, and birds:

The wonderful ivory scenes on this snuffbox only emphasise the beauty of Liotard’s miniature. For as the scholar, politician, and contemporary of Liotard’s, Horace Walpole, noted in the fourth volume of his Anecdotes of Painting in England, Liotard ‘painted admirably well in miniature, and finely in enamel, though he seldom practised it.’ Seeing as he bought it for his personal collection, Arthur Gilbert obviously appreciated the significance of this magnificent enamelled miniature set within such beautifully carved ivory scenes.

The story, however, does not end here. For in 1754, Liotard painted a miniature of Georgiana Poyntz (1737-1841), a beautiful young woman of 17 who, on 20 December 1755, would become John Spencer’s wife. Most unusually for an eighteenth century society wedding, the couple married in private. During a ball at Althorp,  Northamptonshire, the couple and a few select guests secretly went to a room upstairs for the wedding ceremony. The marriage was not announced until Christmas. In 1756 the newlyweds commissioned the architect John Vardy the elder to begin work on their London residence, Spencer House in St James’s Place,  just a stone’s throw from the Royal Academy. This magnificent building, with interiors designed by James ‘Athenian’ Stuart, was finished in 1766 and today houses an important collection of eighteenth century furniture on  loan from the V&A.

Here is Liotard’s masterly representation of Georgiana Poyntz in all her finery, painted the year before her marriage to John Spencer:

This is a spectacular miniature. The colour of the enamel is just so vibrant; Georgiana’s saffron yellow dress and luminous violet robe perfectly offset the purity of her white pearls and the softness of the feather in her hair.

It is highly likely that these two enamelled portrait miniatures were painted by Liotard in celebration of John and Georgiana’s betrothal. Indeed, both were painted in London and were, at one point, in the collection of the earls Spencer at Althorp. Tragically, whilst the miniature of John is safely housed within the Gilbert Collection, the same cannot be said for that of his wife.  Formerly of the Musée de l’Horlogerie et de l’Emaillerie in Geneva, the miniature has been missing since 24 November 2002, when the museum suffered a terrible burglary. The museum has since closed, and its collections have been incorporated into those of the Musée d’Art et d’Histoire de Genève, which has published a detailed catalogue of all 169 stolen objects. Four of these objects are enamelled portrait miniatures by Liotard who was, after all, born and apprenticed in Geneva. The catalogue is in French, but is very well illustrated and thus readily accessible online to all, no matter what language you speak.

Enamel is extremely fragile, and we can only hope that Liotard’s stolen miniatures are still in a reasonable condition. Ultimately, someone, somewhere, must know the whereabouts of these wonderful works of art, which form part of our pan-European heritage. We must continue to be vigilant and one day, perhaps, the miniature of John, first earl of Spencer, will be reunited with that of Georgiana Poyntz, his wife.

This blog post was written with help from Tessa Murdoch, who so generously shared her knowledge and insight with me. Many thanks also to Estelle Fallet at the Musée d’Art et d’Histoire de Genève and Susana Vazquez at the Royal Academy.